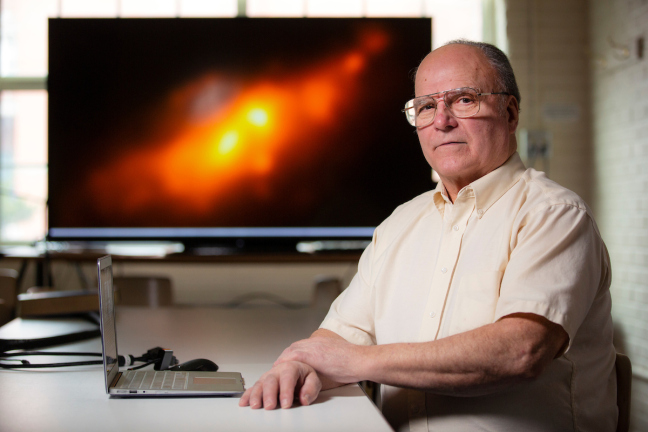 Allen Lawrence, a 77-year-old who earned an Iowa State master's degree in astrophysics in 2018, is first author of a paper revealing a rare double-nucleus structure in a well-known, nearby galaxy. Larger photo. Photo by Christopher Gannon.

AMES, Iowa – Allen Lawrence, wrapping up a long career as an electrical engineer, was serious about moving his astronomy hobby beyond the 20-inch telescope he’d hauled to star parties under the dark skies of Texas and Arizona.

So in 2011 – in his late 60s, after 30 years of operating his own consulting firm around Green Bay, Wisconsin – he enrolled in some courses at the University of Wisconsin-Madison. It wasn’t long before he went around Sterling Hall asking about joining a research team.

Jay Gallagher, now the W. W. Morgan & Rupple Bascom Emeritus Professor of Astronomy at Wisconsin, offered Lawrence the chance to study one of two galaxy systems. Lawrence picked a nearby system studied since the 1960s and featuring the interaction of two galaxies, a larger one known as NGC 4490 (nicknamed the “Cocoon Galaxy” because of its shape) and a smaller one known as NGC 4485. The system is about 20% the size of the Milky Way, located in the Northern Hemisphere and about 30 million light years from Earth.

After taking a look at some infrared images from NASA’s Wide-field Infrared Survey Explorer, Lawrence said it looked like the larger galaxy had a rare double nucleus. One nucleus could be seen in visible wavelengths, the other nucleus was hidden in dust and could only be seen in infrared and radio wavelengths.

Well – after years of study, including earning an Iowa State University master’s degree in 2018 and continuing to work with Iowa State astronomers – Lawrence, at 77, is the first author of a paper revealing the NGC 4490 galaxy does, indeed, have a double nucleus. The paper is now online and has been accepted for publication by the Astrophysical Journal.

“I saw the double nucleus about seven years ago,” Lawrence said. “It had never been observed – or nobody had ever done anything with it before.”

The new paper describes “a clear double nucleus structure.” It says both nuclei are similar in size, mass and luminosity. It says both are similar in mass and luminosity to the nuclei observed in other interacting galaxy pairs. And, it says the double nucleus structure could also explain why the galaxy system is surrounded by an enormous plume of hydrogen.

“The most straightforward interpretation of the observations is that NGC 4490 is itself a late-stage merger remnant” of a much-earlier collision of two galaxies, the authors wrote. A merger could drive and extend the high level of star formation necessary to create such a large hydrogen plume.

The astronomers said there are other reasons they find the study of this system interesting:

Struck, who studies colliding galaxies, said double-nucleus galaxies are very rare, especially in smaller galaxies such as this one. And, he said astronomers think a double nucleus could contribute to the buildup of super massive black holes found in the center of some galaxies.

And Kerton, who researches star formation, said, “This project demonstrates that using multiple wavelengths from space- and ground-based observations together can really help us understand a particular object.”

Iowa State astronomers have revealed that a well-known, nearby galaxy has a rare double-nucleus structure. Their paper reporting the discovery is now online and has been accepted for publication by the Astrophysical Journal. First author of the paper is Allen Lawrence, a 77 -year-old who went back to school to study astronomy after retiring from a long career as an electrical engineer.

“I saw the double nucleus about seven years ago. It had never been observed – or nobody had ever done anything with it before.”

"Revealing the Double Nucleus of NGC 4490," accepted for publication by the Astrophysical Journal.