Researchers affiliated with the Center for Statistics and Applications in Forensic Evidence are developing technology that automatically determines the type of shoe that left an impression at a crime scene. Larger image. Image courtesy of Charless Fowlkes, University of California, Irvine. Related research paper.

AMES, Iowa – Statisticians and forensic scientists across the country will keep working to put statistics behind the pattern evidence found in bloodstains and fingerprints and the digital evidence found in phones and computers.

The National Institute of Standards and Technology (NIST) has renewed support for the Center for Statistics and Applications in Forensic Evidence based at Iowa State University for another five years and up to $20 million. The renewal is effective June 1. 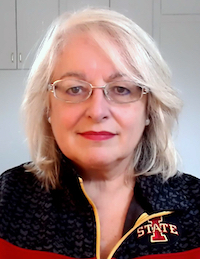 NIST established the center, known as CSAFE, as a Forensic Science Center of Excellence in 2015 with an original five-year grant of up to $20 million. It began as a partnership of Iowa State, Carnegie Mellon University in Pennsylvania, the University of California, Irvine and the University of Virginia.

The center has grown to include more than 60 researchers from the four original universities and two others, Duke University in North Carolina and West Virginia University.

The center’s mission includes building “a statistically sound and scientifically solid foundation for the analysis and interpretation of forensic evidence.” The center’s researchers are also working to grow competence in the forensic and legal communities and to offer education and training.

Alicia Carriquiry – the director of CSAFE, a Distinguished Professor in Liberal Arts and Sciences and the Iowa State University President's Chair in Statistics – said the center started from zero and has made a lot of progress.

“In the first five years, we have learned so much,” she said. “We’re starting CSAFE 2.0 from a very different place.”

Carriquiry said a lot of CSAFE’s future work will focus on transferring scientific findings to investigators in the field and lawyers in the courtroom. Aiding that transfer will be the relationships the center has been building.

The center was launched after national studies called for major reforms and substantial research to validate forensic evidence and techniques. Carriquiry said those reports created some hard feelings among forensic practitioners, who felt unfairly targeted.

“We have been working hard to gain the trust of practitioners,” Carriquiry said. “They were very wary of our efforts five years ago. Now they can begin to see that we’re here to develop new tools that can assist them with producing high quality data and results.”

The National Institute of Standards and Technology has renewed support for the Center for Statistics and Applications in Forensic Evidence based at Iowa State. The renewal adds five years and up to $20 million of support for the center's mission of research, outreach and training.

“In the first five years, we have learned so much. We’re starting CSAFE 2.0 from a very different place.”