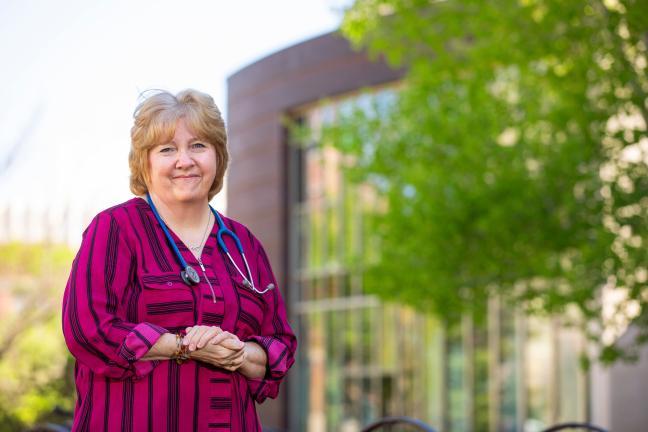 Nursing graduate Dawn Hales stands outside LeBaron Hall, where most of her nursing classes were held. Photos by Christopher Gannon. Larger image.

AMES, Iowa — Dawn Hales had a few ideas for commencement: Snap a photo while walking across the stage or maybe even bust a move.

The 63-year-old and soon-to-be Iowa State University graduate will now have to try those over video chat with her grandchildren or down the halls of her workplace.

Despite a spring semester unlike any Iowa State has seen due to the COVID-19 pandemic, Hales is ecstatic about getting her Bachelor of Science in Nursing (BSN). It’s been a dream of hers for years.

Hales’ husband John, their three sons and their sons’ wives are all ISU alumni.

“I wanted to be an Iowa State grad and I wanted to get my BSN, so when they started the nursing program it was a win-win for me,” she said.

Iowa State’s nursing program has been flexible with her busy schedule, which includes being the director of nursing at Accura Healthcare in Ames, a skilled nursing and rehabilitation center. Iowa State’s second cohort of nurses graduates this spring.

Hales’ career in health care began in the 1980s.

A couple of Hales’ friends attended the Bill Rice Ranch deaf camp in Tennessee. They returned to Burlington and started a deaf ministry at Harmony Bible Church – where Hales met her husband. Hales taught American Sign Language at Southeastern Community College and interpreted for deaf people at Great River Medical Center and in the Burlington area.

Hales’ husband as well as nurses in her ASL classes encouraged her to get her nursing degree. But she didn’t think she was cut out for higher education.

In the years since, Hales has worked her way up and has now been director of nursing at various facilities across Iowa.

Her move to Ames six years ago was the 13th move in the Hales’ marriage. They decided this was where they wanted to stay (plus, their children said they would never move the piano again).

Then in 2017, Iowa State announced it was starting a nursing program. Hales decided to enroll. 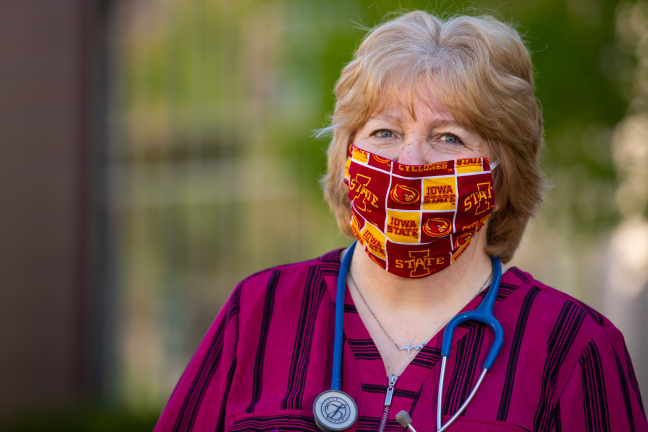 Nursing graduate Dawn Hales wears her Cyclone face
mask outside LeBaron Hall, where most of her nursing
classes were held. Larger image.

She experienced a bit of a learning curve when it came to technological aspects of being back in school, like figuring out how to make a PowerPoint presentation. Thankfully, her youngest son, Micah, was wrapping up his degree at Iowa State at the time and was able to help her.

“On my first day I thought, ‘These guys are all so smart and I feel so stupid.’ They were young, new graduates with a lot of knowledge,” she said. “Come to find out, they thought that I had so much experience, so we kind of melded together.”

Hales said that while she had years of work experience, Iowa State’s BSN program provided her with the missing scholarly piece.

She works full-time, attends her nursing classes on Tuesdays (now online) and is on call for work nearly 24/7.

“It’s been a balancing act,” she said. “But continuing in your education is so important. It’s been an eye-opener for me. I thought I knew a fair amount, but the more I learned, the more I know that I didn’t know anything.”

Before the COVID-19 pandemic prompted Iowa State to migrate online, Hales and her 10-year-old granddaughter, Callie, were brainstorming how she should walk across the stage at commencement.

Hales’ coworkers added some glam to her mortarboard. Once it was announced that commencement would be virtual, they encouraged Hales to do her graduation walk down Accura’s halls. She even has an ISU-themed license plate that reads “RN2BSN.”

“For the most part, when COVID-19 hit, everything stopped,” Hales said. “But for those of us in this type of setting, we just had to go full speed ahead. We haven’t had any problems in our building, yet. We jumped on it early and made sure we were extra cautious, vigilant and took care of our residents and staff.”

Ironically, Hales’ capstone project for her BSN was on infection control.

“What I learned in my BSN program has helped me encapsulate this whole idea of infection control and trying to keep people safe,” she said.

While graduation is a milestone and Hales says her formal education is finished, “I will never stop learning.”

“It’s been a balancing act. But continuing in your education is so important. It’s been an eye-opener for me. I thought I knew a fair amount, but the more I learned, the more I know that I didn’t know anything.” 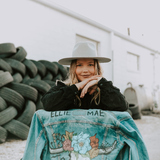 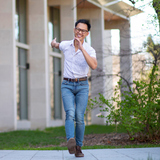