Study of ‘shrink-smart’ towns expanding to include curriculum, big data 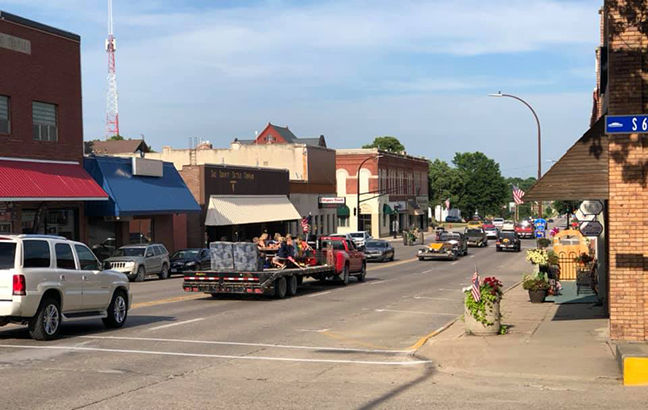 The rural smart shrinkage project, led by Kimberly Zarecor, professor of architecture, received a three-year, $1.5 million grant from the National Science Foundation – the largest federal grant ever awarded to a College of Design-led project.

The research builds upon a pilot study started in 2017 to examine whether there were towns in Iowa that have lost population but perception of quality of life has remained stable or improved. The team found that, among other factors, social infrastructure plays a major role in whether residents report greater quality of life.

Now, the research is expanding.

The first step is to take what they learned about rural smart shrinkage and find a way to share information and strategies with communities showing stress or decline, to see if they can implement changes that could improve quality of life.

The team is partnering with the Iowa League of Cities to develop an online “curriculum” to share with the League’s members and then disseminate across the Midwest.

In the first year, the team will use the Iowa Small Towns Project to identify one group of mentor communities and another group of mentee communities that have participated in the project since 1994. Each pair of towns will work together to implement the rural smart shrinkage curriculum and to test its efficacy.

“We had been looking for ways to share what we knew with a broader base of communities,” Zarecor said. “We don’t want to just push the curriculum out and walk away.”

The team, in collaboration with researchers at the ISU Center for Survey Statistics and Methodology, will develop a prototype of what they’re calling a Community Information Ecosystem (CIE): a set of digital tools to collect data more often and in more depth about people’s perceptions of quality of life in their towns.

“After collecting all available data about small towns and putting them into the CIE, we will analyze these data, identify the data gap for understanding small towns’ quality of life, and develop innovative data collection methods to collect additional data from the residents,” said Zhengyuan Zhu, College of Liberal Arts and Sciences Dean’s Professor, professor of statistics and director of the ISU Center for Survey Statistics and Methodology. “Finally, we will develop tools to integrate all the data and present them to the community in an accessible way.”

“At the moment, there often isn’t a good mechanism in these small towns to get up-to-date comments about issues unless somebody calls, writes a letter or shows up once a month to the town council meeting,” Zarecor said. “The idea is to introduce this at the community level so it helps build people’s sense of belonging to the wider community and integrates different groups of people who may not have a lot of contact.”

The project will also involve research about quality-of-life polling. Small town residents are oversampled because as their population shrinks and researchers need data about rural communities, they’re sampling from a smaller and smaller pool of respondents.

“Even in 1994 and 2004 to have a response rate to a survey near 70% was phenomenal and unheard of in other parts of the country,” Peters said. “People don’t want to fill out surveys or the Census form, and voter participation is down. These are all symptoms of decline in people’s trust of institutions and not wanting to engage in civic life.

“These small towns might be a microcosm of what we’re seeing nationally.”

Social connectedness and civic engagement are two hallmarks of the smart-shrinking towns that the research team found in Iowa over the past three years.

The team plans to also use the Community Information Ecosystem prototype to research better quality-of-life polling methods. By using secondary data – such as those about quality of schools and health care – the team can weed out unnecessary survey questions and instead target those about quality of life where data don’t exist.

As they develop different polling models, the team will be able to test them as part of the next Iowa Small Towns Project poll in 2024. In addition, Peters received a separate NSF grant to study the effects of COVID-19 on small towns this year, which will help provide more current data in addition to the 2014 poll.

The Community Information Ecosystem will pull in relevant information from the state of Iowa – as it’s updated – into a hub of data for each town. But you cannot simply dump data onto a town.

Part of the work of Biswa Das, associate professor of community and regional planning, will fall in the same vein as his Iowa Government Finance Initiative (IGFI), which packages budget data and presents them to Iowa towns in an easily digestible format. Part of the research will be figuring out which data are predictive of quality of life, and how to package them so they are useful for communities.

“IGFI, with its focus on small communities in Iowa, is perfectly aligned with the broad goals of the smart shrinkage project,” Das said. “Through its focus on educational outreach guided by data-driven assistance to small communities, IGFI will supplement other aspects of this project, including community-level quality of life measures.”

Susan Vanderplas, assistant professor of statistics at the University of Nebraska, Lincoln, will lead data science and data visualization. In line with Das’ goal to streamline data for small towns, Vanderplas will create an interactive, visualization-focused dashboard for each community.

“It can be hard to see your own community objectively, so having access to concrete data may help rural communities make informed decisions about issues important to the community’s future,” Vanderplas said.

Iowa State's rural smart shrinkage project has received a three-year, $1.5 million grant from the National Science Foundation to build upon its pilot study examining whether there were towns in Iowa that have lost population but perception of quality of life has remained stable or improved.