After trauma early in college career, Iowa State senior is thankful for graduation 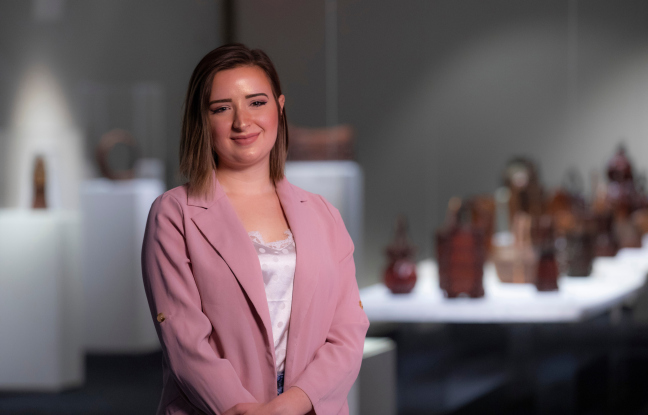 Sarah Bartlett is graduating in anthropology, classical studies and political science. She is the Pohlman Fellow with University Museums and has curated exhibits in the Brunnier Art Museum. Photo by Christopher Gannon. Larger image. All photos and videos were shot following physical distancing guidelines, and with staff wearing face coverings.

AMES, Iowa — On Sarah Bartlett’s second day of her freshman year at Iowa State University, she received a phone call that made her stomach drop.

Bartlett will graduate next weekend with bachelor’s degrees in anthropology, classical studies and political science. Her road here has not been easy, however.

On that day in 2016, Bartlett learned that just days after her father helped her move in to Friley Hall, he had collapsed while on a work trip in Mississippi. He immediately fell into a coma. When Bartlett was 10 years old, her father was diagnosed with Parkinson’s disease. He had been taking a medication that would “jump start movement” anytime his dyskinesia got out of hand.

“The drug worked really well and his movement was better, but what his physician’s assistant didn’t predict is that when he was taking it so much it was causing his muscles to break off basically in chunks,” Bartlett said. “His system was so flooded with lactic acid that his blood was toxic.”

Doctors did not think he would live through the night. But when his wife arrived, he heard her voice and turned his head. Miraculously, he lived, although he had a long road of rehabilitation ahead of him. That fall semester, Bartlett went home nearly every weekend to visit him and help her mother.

Persevering through another setback

That New Year’s Eve, Bartlett and her mother vowed that 2017 would be their year.

Bartlett was studying at Parks Library one night that spring when her mother called her with more bad news: She had been diagnosed with breast cancer. In addition to her coursework, Bartlett committed again to going home as often as possible to drive her mother to doctor’s appointments and surgeries.

“On top of her diagnosis, she was still taking care of my dad because when he first came home he couldn’t walk at all; he could barely lift his hands to wash his face,” she said.

But her parents did not want her to sacrifice her education – what she had been planning for and working toward since she was a little girl. So that summer, she went on a study abroad trip to excavate on the island of Crete, what she calls “a dream come true.”

Today, Bartlett’s mother has been cancer-free for more than a year and she recently sent Bartlett a video of her father dancing.

Bartlett started her sophomore year thinking, “This is the one.” Then she woke up in a hospital bed.

On Sept. 8, 2017, Bartlett was driving to her apartment in McCallsburg when she swerved to avoid an oncoming car. She rolled into the ditch and suffered neck abrasions from her seat belt, a dislocated shoulder, cuts and burns and the most traumatic – a severe concussion.

When she woke up, Bartlett was stuck in a loop. Every two minutes, she would ask the same questions. Her mother recognized it as perseveration – a symptom of people with significant brain damage.

“I had lost the previous two months,” she said. “I just kept saying, ‘I went to bed in Crete and I woke up here.’”

A difficult decision awaited. Bartlett chose to withdraw from Iowa State that semester to allow her brain to heal. To this day, Bartlett still doesn’t have memories from those two months; she’s also lost many of her childhood memories.

“I had an almost eidetic memory before. I was the type of person who could close my eyes and picture the textbook,” she said. “Even though I still have memory loss, I just got knocked down to a normal memory. I don’t have lots of permanent damage besides being a heck of a lot more spacey than I used to be.

“All I ever wanted since I was a little girl was to have a full-time job and a career. That moment was really scary because I was afraid that wouldn’t happen, and what would that mean for me if that didn’t happen?”

That semester off led to an internship at a law firm, though, which led to her third major: political science.

Since the age of 7, Bartlett has been planning for a career. That started out as marine biology, but after writing a college essay talking about her passion for learning about history and other cultures, her mother suggested she look into anthropology.

“When I decided I wanted to go to Iowa State, I jumped in with anthropology and classical studies and never looked back,” she said.

Her goal is to curate exhibitions for museums, something she’s had practice with during her time at Iowa State. Last fall, Bartlett was named University Museums’ inaugural Lynette L. Pohlman Museum Fellow, an opportunity that allowed her to manage the “Contemplate Japan” exhibit and curate her own: “A New World: 600 BCE – 600 CE,” now at the Brunnier Art Museum.

“I’m so grateful for all of the opportunities I’ve had at Iowa State,” she said. “I can’t imagine having this combination of excavation experience, study abroad experience and museum experience anywhere else.”

Sarah Bartlett’s college career at Iowa State University began with a series of traumatic events. Despite the pain and stress, Bartlett refused to give up on her education and will now graduate next weekend with degrees in anthropology, classical studies and political science.

“All I ever wanted since I was a little girl was to have a full-time job and a career. That moment was really scary because I was afraid that wouldn’t happen, and what would that mean for me if that didn’t happen?”

“I’m so grateful for all of the opportunities I’ve had at Iowa State. I can’t imagine having this combination of excavation experience, study abroad experience and museum experience anywhere else.”

Due to the ongoing COVID-19 pandemic, Iowa State’s fall commencement ceremonies will once again be virtual.

The ceremonies for undergraduates, masters and Ph.D.s will be available on-demand at 10 a.m. Saturday, Nov. 28. Find all commencement information here: www.graduation.iastate.edu 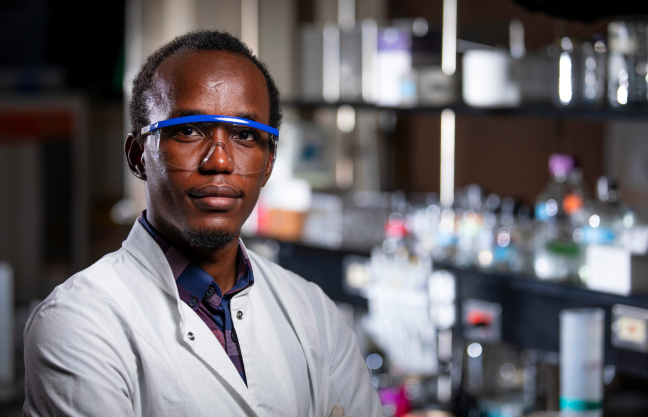 Mohamed Shogar came to the United States from Sudan in 2016, without knowing the language or understanding the culture. Next weekend, after four years of hard work – both academically and professionally – Shogar will graduate from Iowa State and start his journey to medical school.