Iowans advise NASA on which satellites should stay in orbit

AMES, Iowa – A pair of Iowans, including an Iowa State University agronomy professor, helped to shape the future of NASA by evaluating the agency’s satellite missions and recommending which satellites should stay in orbit.

Brian Hornbuckle, a professor of agronomy at Iowa State; and Jun Wang, who holds the James E. Ashton Professorship in Chemical and Biochemical Engineering at the University of Iowa, both took part in a senior review advisory panel that evaluated 13 NASA satellite missions on a wide range of criteria. Hornbuckle and Wang were two of 13 scientists selected to serve on the congressionally mandated panel, which advises NASA every few years on which satellite missions should continue and which should be grounded.

Each panel member reviews one satellite mission as a primary focus and two other missions as secondary focuses, evaluating each mission on technical considerations such as how much remaining fuel a satellite possesses and how easily a satellite might be disposed of if its mission were to end. The panel also considers cost-benefit analyses and how successfully each satellite has fulfilled its mission. The panel weighs the quality of the science enabled by the satellite missions as the chief consideration in its deliberations, Hornbuckle said.

Hornbuckle devoted around 100 hours to the review process starting last spring, he said, poring over technical specifications of satellites and going through the data they collected. He said he based his recommendations on what’s best for future scientific study.

“We’re representing all scientists who use NASA satellite data because we want to think about what is in the best interest of the scientific community,” he said. “Should we continue with existing satellites or invest in new ones?”

Hornbuckle served as the senior reviewer for the Soil Moisture Active Passive (SMAP) satellite, which determines water stored in Earth’s soil by measuring the microwave radiation emanating from Earth. Hornbuckle has worked on similar satellite projects for the European Space Agency, and he previously validated data generated by SMAP by taking soil moisture measurements at test sites in Iowa. Many private and governmental entities make use of the data gathered by SMAP, Hornbuckle said, and the senior review panel recommended to expand the SMAP mission to include faster data dissemination. Doing so could help the National Weather Service make better use of the data when making weather predictions, Hornbuckle said.

Wang, also assistant director of the University of Iowa Technology Institute, had a primary mission to review earth observation instruments on the Deep Space Climate Observatory (DSCOVR) satellite parked 1.5 million km away from the Earth. DSCOVR not only monitors the sun by measuring solar wind and other space weather events that have the potential to disrupt infrastructure on Earth, but it also monitors Earth by measuring reflected sunlight and emitted radiation by the Earth and its atmosphere. Wang said the panel recommended continuing the operation of earth observation instruments on DSCOVR as well due to its scientific merit, the high-quality data it generates and its cost-effectiveness.

Both Wang and Hornbuckle said NASA satellites provide a wealth of data that help scientists better understand how our planet works and contributing to the senior review of the satellite projects was an honor.

“The Earth’s systems are so complex,” Wang said. “There are so many ways to look at things from space. As the lead reviews, we have to articulate each emission we are asked to review and set the stage for other panel members to appreciate that mission. In return, we each also learned a great deal from other panel members about other missions, as well as the breadth and depth of NASA’s portfolio for observing a complex system such as Earth.”

Hornbuckle said NASA’s efforts to observe the Earth through satellites rank among its most valuable accomplishments.

“We want people to know that NASA isn’t just about going to the moon and Mars,” he said. “It’s also about studying our home planet. Remote sensing satellites tell us about what’s happening on Earth so we can make wise decisions for the future.”

Iowans are helping to shape the future of NASA’s satellite missions. Faculty from Iowa State and Iowa were among 13 scientists selected to serve on a congressionally mandated panel to advise NASA on which satellite missions should continue and which should be grounded. 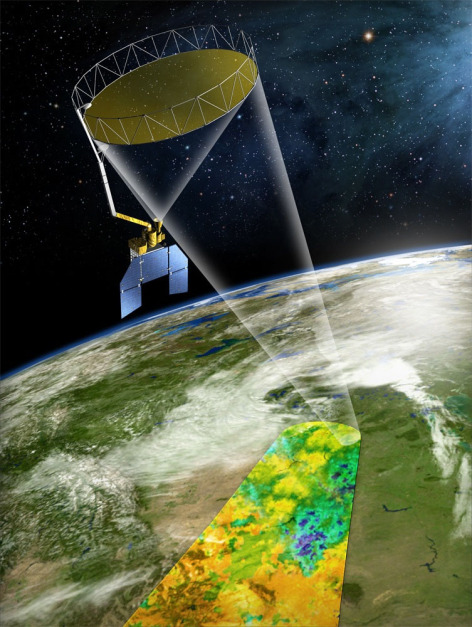 This illustration depicts the Soil Moisture Active Passive satellite as it orbits Earth. An ISU faculty member advised NASA on the future of this and other satellite missions. Image courtesy of Brian Hornbuckle. Larger image.

“We’re representing all scientists who use NASA satellite data because we want to think about what is in the best interest of the scientific community. Should we continue with existing satellites or invest in new ones?”