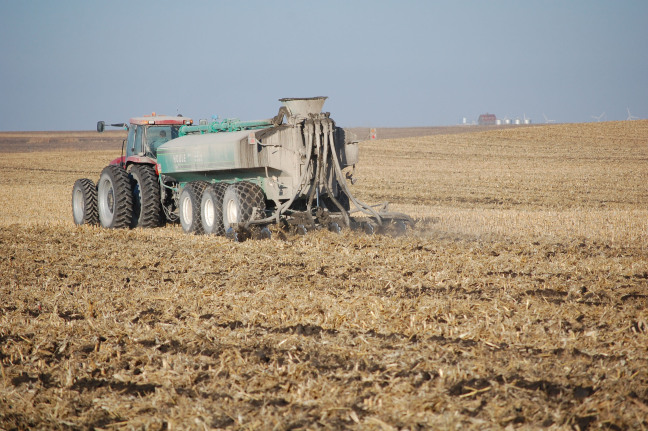 Scientists at Iowa State University are studying the relationship between manure management practices, such as the application of manure to farm fields pictured here, and antibiotic resistance. Photo by Rachel Kennedy. Larger image.

AMES, Iowa – What does manure have in common with antibiotic resistance? For starters, they both stink, though in different ways. But there might be even more to the relationship than that.

Researchers at Iowa State University recently received a $1 million grant from the U.S. Department of Agriculture’s National Institute of Food and Agriculture to study how manure management systems in livestock production affect the development of bacteria capable of resisting antibiotics. The effort builds on previous research the scientists have conducted to determine how livestock production interacts with other complex factors, such as environmental processes, to contribute to antibiotic resistance.

Antibiotic resistance is the process by which disease-causing bacteria develop the ability to protect themselves against medications used to stop them. Antibiotic resistance poses a growing threat to human, animal and environmental health because the speed of resistance currently outstrips the speed with which new antibiotics are being developed, said Adina Howe, an assistant professor of agricultural and biosystems engineering and principal investigator on the grant. This trend could limit the availability of treatments for a range of maladies and infections, both in humans and animals.

“The reason this is so important is we cannot discover new antibiotics fast enough to fill in for the medications that are losing their effectiveness,” Howe said.

The researchers’ work will fill gaps in science’s understanding of how livestock production, particularly manure management, can reduce the spread of antibiotic-resistant bacteria. The majority of antibiotics in use today are used in animal production, Howe said. Antibiotic-resistant bacteria can wind up in manure before making their way into the environment, such as when manure is applied to fields as fertilizer. The researchers aim to figure out what resistant genes are proliferating in bacteria and how widely those bacteria spread and persist in soil.

To answer these questions, the research team will receive manure samples from pig farms in Iowa on which to conduct laboratory experiments. Some of the manure used in the research will come from pigs that have been exposed to antibiotics, while some samples will come from pigs that never received antibiotics. The researchers will then attempt to connect the dots between antibiotic-resistant bacteria they find in the manure and the specific antibiotics applied to the pigs involved in the experiments.

They’ll use a suite of state-of-the-art techniques they’ve developed in previous studies to identify the biology and chemistry at work in manure management systems. These techniques will allow the research team to identify the specific antibiotics and bacterial strains present in the samples, as well as the specific genes that confer resistance.

The researchers also will examine the feasibility of various methods to stop the spread of resistant bacteria, such as decomposition with composting. They’ll also look at anaerobic digestion, in which manure is sealed in an oxygen-free tank and broken down into biogas and biofertilizer.

Howe said human, animal and environmental health interact in complex ways that influence the pace at which antibiotic resistance spreads, a concept known as “One Health.” She said her research helps to shed light on how these factors connect.

Iowa State University researchers received a $1 million grant to study how manure management systems in livestock production may give rise to antibiotic resistance. Human, animal and environmental health interact in complex ways that influence the pace at which antibiotic resistance spreads, and the researchers hope their work will shed light on these connections.

“The reason this is so important is we cannot discover new antibiotics fast enough to fill in for the medications that are losing their effectiveness.”