This is the latest entry in a series of articles telling the personal stories of Iowa State University faculty and scientists whose work is changing the world for the better. Click here to read about previous Change Agents.

AMES, Iowa – Jessica Ward has never been one to do things a certain prescribed way just because that’s how things have always been done.

Ward is always on the lookout for improvements, both big and small, that might make things run more efficiently. That approach has applied to many aspects of her life, whether finding a better way to schedule rehearsal time as a high school dancer or in expanding the use of ultrasound technology in the curriculum at the Iowa State University College of Veterinary Medicine.

Ward’s always game for reevaluating conventional wisdom to see if there are better options available. But she also understands the importance of choosing her battles wisely and that some time-honored traditions enjoy their status for good reason, a lesson she learned studying the centuries-old forms of ballet.

For Ward, an associate professor of veterinary clinical sciences, both dance and veterinary medicine have played essential roles in her development going all the way back to her childhood.

Ward still has the photo. She’s six years old and dressed up for Halloween. Her costume includes a white lab coat, and a stethoscope hangs around her neck. She’s holding some stuffed animals, too. A cat, a dog and an owl. Even a platypus. At that young age, Ward knew she wanted to be a veterinarian, and her career aspirations influenced her choice of Halloween costume.

Ward grew up in Idaho Falls, Idaho, the daughter of two parents who both had scientific backgrounds. Her parents instilled in her a scientific curiosity, and, combined with her love of animals, she aspired to be a veterinarian early in her childhood.

And her love of dance began around the same time. She started taking ballet lessons at age 5 and went to dance camp most summers. Over the years, she’s studied jazz, modern and tap dance as well. As an undergraduate student at Duke, she joined the dance team that performs at sporting events like home basketball games at storied Cameron Indoor Stadium.

“Animals and dancing, those were the two things I loved most in the world,” Ward said while describing her upbringing.

After finishing her undergraduate studies, she completed a Fulbright scholarship studying wild lions in Botswana. The research compared the demographics and reproductive trends among free-ranging lions in southern Africa with lions in eastern Africa. The research helped inform trophy hunting policies in Botswana.

Ward recalls driving a Land Rover through harsh wilderness terrain while studying the lions. With no paved roads to drive on, the Land Rover’s tires sometimes punctured, and she would have to change a tire with wild lions just a few meters away.

“You get stuck and there’s lions right there,” she said. “You’d think it’s really scary, but the lions are way more scared of you than you are of them.”

Ward returned to the United States and achieved her childhood dream of becoming a veterinarian after earning her doctorate in veterinary medicine at North Carolina State University. Ward said she originally intended to study exotic and wildlife animals after her experience in Africa, but she eventually elected to specialize in cardiology because it offered a more direct path to an academic career, and she knew she wanted to teach students. She joined the faculty at Iowa State in 2015.

Expanded use of ultrasound

Since starting at Iowa State, Ward has worked to expand the use of ultrasound technology at the college, particularly its applications in cardiology. Historically, X-rays are used to diagnose the telltale presence of fluid in the lungs that results from congestive heart failure, but Ward said ultrasound can diagnose the same heart problems without some of the drawbacks commonly associated with X-rays. For instance, getting an animal properly positioned and sitting still for an X-ray, particularly if that animal might be suffering from heart distress, can pose serious difficulties for veterinarians. Additionally, an ultrasound machine can be wheeled into just about any exam room while the animal must be transported to a designated room for X-rays, which may further complicate an emergency situation.

Many in the medical profession hesitate to use ultrasound to scan lungs because the air inside lungs impedes ultrasound waves. But Ward said the technique can work well to find fluid in the lungs associated with congestive heart failure, because the fluid causes recognizable patterns of ultrasound artifacts. Just a quick look with an ultrasound in an emergency situation can yield important clues about what might be causing the patient’s illness, and human medicine has embraced the method over the last two decades, she said.

Much of Ward’s research and work at Iowa State involves developing and implementing ultrasound in the curriculum of veterinary students as well as using the technique in clinical settings in the Hixson-Lied Small Animal Hospital.

“Teaching, research and clinical service are sometimes talked about as a triumvirate of separate things, but they really overlap,” Ward said. “My ultrasound work illustrates how that’s really true.”

A lifetime of dance

Ward has continued to dance since moving to Ames in 2015. She took a small role in the Nutcracker Ballet at Stephens Auditorium her first year at Iowa State, which was a role reversal for her after dancing in lead parts as a child. And she continues to participate in adult dance classes.

Dance has taught her the lessons of discipline and time management, which also apply to her role as a veterinarian. Her study of various dance styles influences her veterinary work in other ways, she said. Sometimes you have to get creative and challenge the status quo, as in jazz or hip hop dance. But other styles, like ballet, require a healthy respect for tradition.

“Ballet has strict rules about what each movement looks like and what positions are, and these forms are hundreds of years old. That structure gives ballet great beauty,” Ward said. “There are other forms of dance that are more about creativity and individuality. I think that translates very well to me in life. I’ve learned there are times to challenge authority and think outside the box, but you also have to recognize why those structures exist. I try to strike that balance to get the best outcome.”

Jessica Ward has danced on some big stages and studied wild lions in Botswana. She knew from an early age she wanted to be a veterinarian, and now she works to expand the use of ultrasound technology at the ISU College of Veterinary Medicine.

“Ballet has strict rules about what each movement looks like and what positions are, and these forms are hundreds of years old. That structure gives ballet great beauty. There are other forms of dance that are more about creativity and individuality. I think that translates very well to me in life. I’ve learned there are times to challenge authority and think outside the box, but you also have to recognize why those structures exist. I try to strike that balance to get the best outcome.” 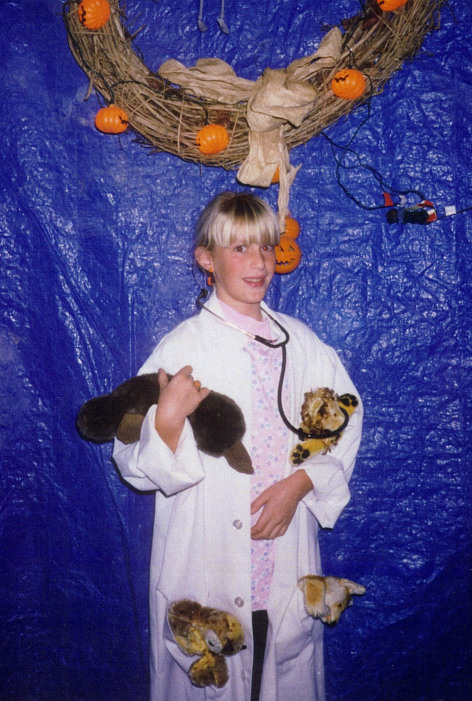 Ward wanted to be a veterinarian since childhood. She even dressed as a vet for a Halloween costume party when she was six years old. Larger image. Photo courtesy of Jessica Ward.