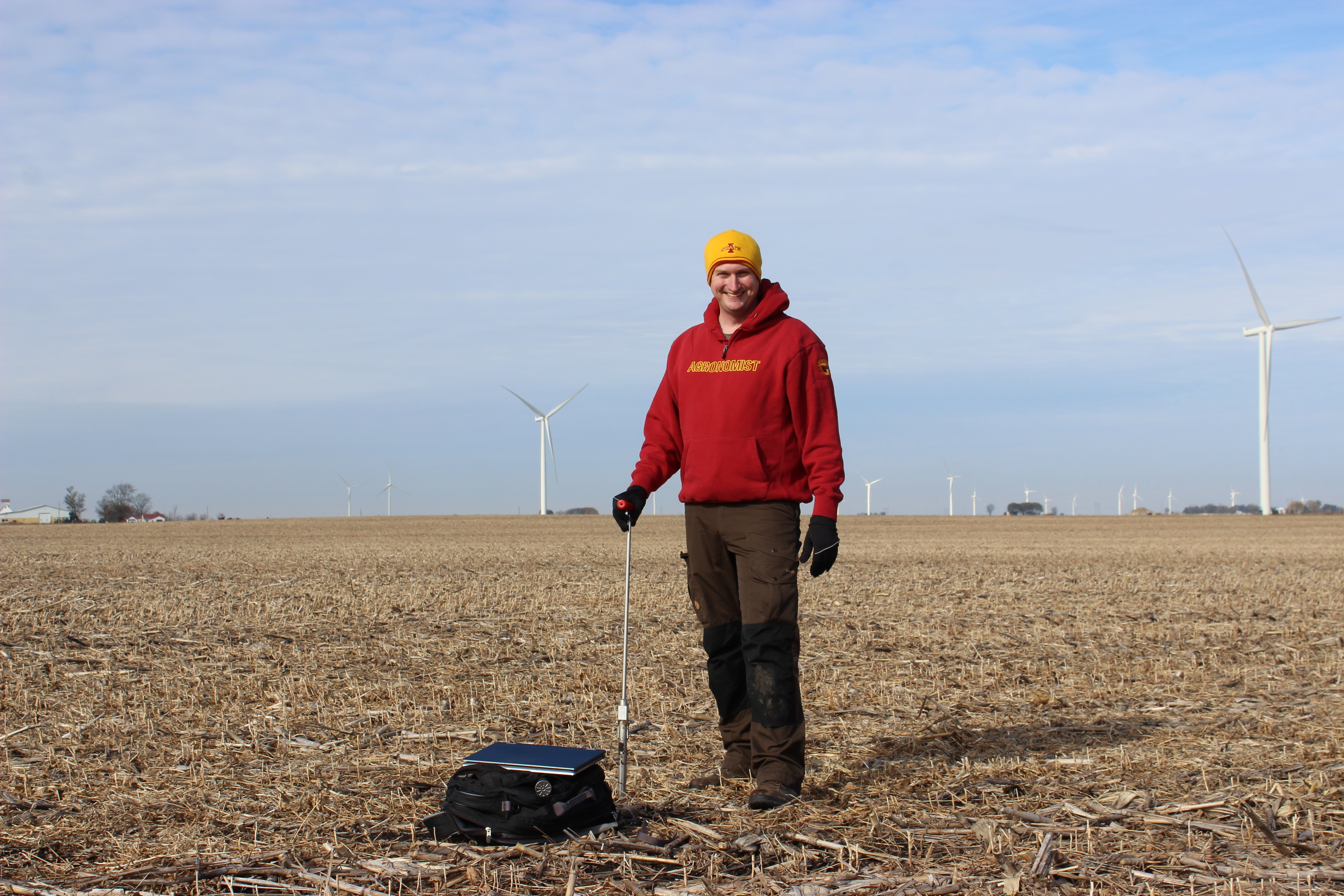 Bradley Miller takes soil samples from a field. Part of Miller’s research aims to bridge geomorphology, or the study of how landforms change over time, with soil science. Image courtesy of the ISU College of Agriculture and Life Sciences. Larger image.

AMES, Iowa – Climate change and soil erosion feed into one another in an environmental feedback loop that can have big consequences for Iowa land, but an Iowa State University agronomist is developing new models to illuminate these complex interactions.

Developing these new computer models of soil erosion and topography changes requires both innovative big-data technology as well as painstaking validation of soil measurements in the real world, said Bradley Miller, an ISU assistant professor of agronomy. Miller recently received support from the National Science Foundation to continue his research to develop updated soil maps of Iowa as well as erosion models capable of predicting how environmental conditions will influence Iowa’s soil in the future.

NSF awarded Miller a faculty early career development grant worth $574,000 to support the research. The award program is the most prestigious award NSF grants to early career faculty.

Climate models predict more precipitation and flooding in the Midwestern United States as a result of climate change, which will accelerate soil erosion. More erosion, in turn, will diminish the ability of soils to store water, which can lead to nutrient loss and higher peaks during flooding events.

“The soil landscape is part of the system interacting with climate, which traditionally we have treated as not changing,” Miller said. “The work that we will be doing will enable the inclusion of a changing soil landscape in the climate, crop and flooding models.”

Although there has been a great deal of research and a wide variety of approaches for studying soil erosion and landscape evolution, they have been limited by the ability to validate the models only on a few hillslopes at a time, Miller said. Geomorphology models focus on changes in the shape of hillslopes, while soil erosion models tend to account for the mass of soil transported down hillslopes. Often, those models don’t reach the same conclusions when making predictions, Miller said.

So part of his research aims to bridge geomorphology, or the study of how landforms change over time, with soil science. To do so, he and his lab group are comparing data on Iowa’s topography gathered by light detection and ranging (LiDAR) technology, which uses pulsed lasers mounted on airplanes to make detailed scans of the Earth. Miller has analyzed LiDAR data gathered across Iowa in 2009 and will compare how that data changed over the course of a decade. The researchers will then validate the erosion models with the real-world observations of elevation change detected by the LiDAR data.

All that data will then inform the creation of new predictive models of soil erosion as well as facilitate the researchers’ ability to create new soil maps for the entire state. Keeping soil maps updated requires a large quantity of “boots on the ground,” Miller said. Models that account for the redistribution of soil down slopes and the resulting change in topography will allow for more efficiently updated soil maps and better forecasting of what the map will look like in the future.

The rate of soil loss through erosion is often measured in tons per acre, but Miller said those statistics are often difficult to visualize. New soil maps will create a more striking visual to help Iowans better grasp soil erosion.

“Citing a bunch of big numbers can sometimes lose people,” he said. “We’re going to convert this into a map so you can actually see what has changed in the landscape. I think maps are immensely powerful.”

Updated soil maps and predictive erosion models will be of obvious use to Iowa’s agricultural sector, but Miller said they will have many more applications as well. Soil maps inform decisions on construction and development in communities across the state. In fact, just about any big land-use decision will benefit from having updated soil maps, Miller said.

“Because our land is so important, we need to feed this information into models,” Miller said. “This is the foundational information that helps us make better decisions.”

“The soil landscape is part of the system interacting with climate, which traditionally we have treated as not changing. The work that we will be doing will enable the inclusion of a changing soil landscape in the climate, crop and flooding models.”

This elevation map along the Missouri River taken after flooding in 2011 shows where the flood waters washed out some areas and deposited sediments in other areas. The map was made possible by comparing LiDAR data taken in 2009 to LiDAR readings taken after the flood in 2011. Miller hopes updated LiDAR data can make similar maps possible for the entire state. Larger image.