This is the latest entry in a series of articles telling the personal stories of Iowa State University faculty and scientists whose work is changing the world for the better. Click here to read about previous Change Agents.

For Sashital, an associate professor in the Roy. J. Carver Department of Biochemistry, Biophysics and Molecular Biology at Iowa State University, scientific research is a means of asking and answering questions about the very basics of life. She studies DNA and RNA and how they influence everything from bacteria to plants to people.

She works with revolutionary technologies, such as CRISPR-Cas9, that delve into the foundational mechanics of biology, and she views every step in the process – even the ones that don’t turn out as expected – as an opportunity to uncover something new.

From automotive engineering to RNA

Sashital grew up in the Detroit area, and her father was an automotive engineer at Ford. She fell in love with science and math at an early age and considered following her father into the automotive industry. Not only did she grow up in a “Ford family,” but many of her friends did as well. The auto industry formed the backdrop of her childhood in many ways, and she even completed an internship at Ford during high school. But she discovered that her way of thinking didn’t lend itself to engineering so much as research.

She decided to study chemistry when she started her undergraduate education at the University of Michigan and almost immediately began working in a laboratory.

A dedicated Midwesterner, Sashital earned her doctorate at the University of Wisconsin – Madison. She studied biochemistry and began conducting research into RNA, which has been a through line of her career ever since.

Sashital completed postdoctoral work at the University of California, Berkeley and then the Scripps Research Institute in San Diego, but she knew she wanted to return to the Midwest. A faculty position at Iowa State opened up in January of 2014, and Sashital jumped at the opportunity. 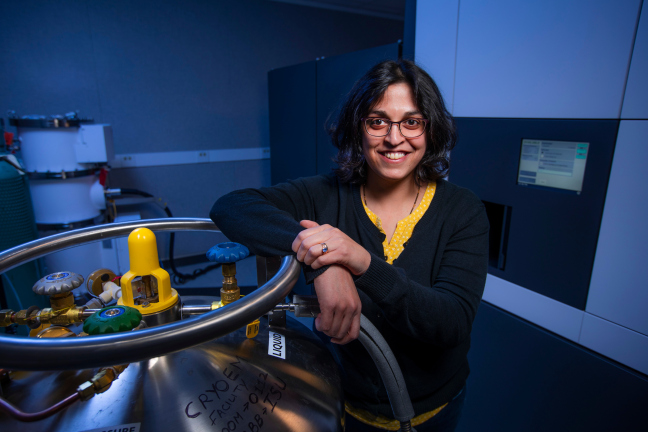 Dipali Sashital with the cryo-transmission electron microscope inside the Molecular Biology Building. The instrument, behind her, makes Iowa State a leader in advanced electron microscopy for biomolecular research. Photo by Christopher Gannon. Larger image.

The thrill of the scientific method

Sashital devotes much of her research to understanding how bacteria fight off pathogens, such as viruses. The interactions between bacteria and pathogens can have big implications for a huge range of disciplines, but Sashital listed human health and agriculture as two prominent examples.

She described these interactions between bacteria and bacteriophages (a word that describes viruses and target bacteria) as an intricate back-and-forth process. Bacteria fight off some bacteriophages, while others find ways of overcoming the bacterial defense mechanisms. Sashital and her colleagues focus on understanding how that back and forth plays out.

These interactions are some of the most ubiquitous biological activities carried out on planet Earth. They occur inside every human body, for instance. The human microbiome – or all the tiny bacteria, fungi, protozoa and viruses inside every person – contains trillions of symbiotic microbial cells, and many of them interact with one another.

Getting a look at these processes can require some serious magnification, and Sashital and her colleagues utilize the powerful electron microscope in Iowa State’s new Cryo-EM facility to do so. The facility, supported by a grant from the Roy J. Carver Charitable Trust of Muscatine, opened in late 2020. The microscope produces images with a magnification around 100,000x, allowing scientists like Sashital valuable data. Sashital’s research relies on high-tech equipment and processes like the Cryo-EM facility, but it also informs the development and advancement of new cutting-edge technologies as well.

For instance, she’s exploring the mechanisms of CRISPR-Cas systems, which allow for precise cutting and editing of an organism’s genes. CRISPR-Cas9 technology grew out of the immune response in bacteria that combats pathogens, and scientists have learned to harness the process to change and delete targeted pieces of the genomes of other organisms.

Sashital compares CRISPR-Cas9 to a word processing application. If an organism’s genome is a vast document containing a huge number of words and characters, CRISPR-Cas9 allows for precise cutting and pasting of precisely chosen words into the document. The technology relies on CRISPR RNA as a guide to find the correct location in an organism’s genome to make a change. Then Cas9, a bacterial enzyme capable of breaking DNA, cuts out the targeted section. The technology then relies on mechanisms already present in the cell to “paste” new DNA into the cut section. The result is an edited genome in which scientists can precisely determine the changes they want to make.

And the process starts with RNA, an acid present in all cells that carries instructions from DNA to make protein synthesis possible. Sashital’s research has centered on the basic functions of RNA, dating back to her doctoral work. RNA research also taught her some valuable lessons about the scientific process – some of which she learned the hard way.

Sashital took on an ambitious project as a postdoctoral researcher at Berkeley. She wanted to study piwi-interacting RNAs, a class of small noncoding molecules that act as guides that regulate various cellular activities. The research project involved in-depth study of proteins that Sashital suspected created the RNAs. She gathered data for about a year-and-a-half and even began drafting a paper on the topic – then the rug was pulled out from under her research.

She decided to try a few more controls to make sure the interactions she was observing originated in the proteins she was analyzing. Turns out, the same activity occurred when running the same experiments on a different protein. She realized the relationship she thought she was observing in her data wasn’t really there.

“The activity was from something else, something so minuscule I couldn’t see it, but it was there,” she said. “Doing that one extra experiment was critical because I would hate to have published something that wrong in my career.”

But she said the experience made her a better scientist by teaching her the importance of validating results to the highest possible standard. She’s designed her experiments ever since so she can be more confident in the results, she said. Though Sashital had to go back to the drawing board after a year-and-a-half of gathering data, the setback put her in a better position to make discoveries later in her career.

And, in Dipali Sashital’s eyes, the thrill of discovering something new is the most exciting part of being of a scientist.

In Dipali Sashital’s eyes, the thrill of discovering something new is the most exciting part of being of a scientist. Sashital explores the mechanisms of CRISPR-Cas systems, which allow for precise cutting and editing of an organism’s genes. These technologies have the potential for revolutionary advances in human health and agriculture.