AMES, Iowa – It looks like the risks are paying off.

Lisa Schulte Moore, a professor of natural resource ecology and management at Iowa State University, has made some unorthodox decisions in pursuit of her vision of agricultural systems that meet the demands of a growing global population while protecting the environment. She’s reached far outside the confines of her discipline to bring new perspectives to long-term problems. She’s led grant applications where all of the funding supported research outside her lab, and she’s taken it upon herself to spend a lot of time on outreach, far beyond the expectations of her appointment.

All that sometimes comes at the cost of more conventional measures of a career in science. For instance, Schulte Moore said her leadership and engagement activity took up time she could have spent with her own lab and working on journal articles.

But her team’s pioneering research into prairie strips has contributed to the adoption of the conservation practice in more than a dozen states. And in late September, she received a MacArthur Fellowship, a prestigious award sometimes referred to as a “genius grant.”

Definitely unorthodox in today’s scientific world, maybe even a little risky. But it’s difficult to argue with the results.

Schulte Moore grew up in Eau Claire, Wisconsin. Family camping trips and regular visits to her great-grandmother’s farm outside of Eau Claire inspired her early interest in science and the natural world. She decided to enroll as a biology major at the University of Wisconsin- Eau Claire with the intention of pursuing a career in research.

“From there, it was just kind of following my interests and passion from one question to another. Following my curiosity, I would say,” Schulte Moore said.

That curiosity led her to a master’s degree during which she studied the effects of wildfire and logging on bird populations in northern Minnesota. She completed a Ph.D. in forestry at the University of Wisconsin before taking a position working for the U.S. Forest Service.

Schulte Moore said she discovered barriers to communication between wildlife biologists and foresters that made conservation more difficult. That experience was her first inkling that better communication across disciplines could lead to better outcomes, a realization that would inform the direction of her future work. She also knew studying interactions between people and landscapes would form the cornerstone of her work from the earliest stages of her career.

“Conservation has always been part of my scientific pursuits,” Schulte Moore said. “I think it comes from a deep love of nature and also a recognition that human society, in all its glory and warts, is still dependent on the proper functioning of our planet.”

While working for the U.S. Forest Service, Schulte Moore made her first visits to the campus of Iowa State University. Those visits made a positive impression, and Schulte Moore applied for a position at the university when one opened up, joining the ISU faculty in 2003. Since then, Schulte Moore has devoted much of her work to meeting humanity’s need for the food, fuel and fiber provided by agricultural systems, while finding innovative ways to protect the environment. Shortly after joining the ISU faculty, she began laying the groundwork for a research effort that would become known as prairie STRIPS, or Science-based Trials of Rowcrops Integrated with Prairie Strips.

While crucial to food production and Iowa’s economy, conventional corn and soybean farming can deplete topsoil, the foundation of agricultural productivity. Nutrient runoff from farm fields can pollute waterways and contribute to dead zones in the Gulf of Mexico. But growing prairie strips on agricultural fields keeps more roots in the soil, holding nutrients in place while also providing habitat for wildlife. Now more than a decade old, the STRIPS research team has produced numerous advancements in the understanding and management of reconstructed prairie on agricultural landscapes that show far-reaching environmental benefits.

Prairie strips can reduce soil loss from nearby farm fields by 95% and nitrogen and phosphorous runoff by 70-80%. The U.S. Department of Agriculture sought input from Schulte Moore and other ISU  researchers when developing policies to implement prairie strips as an authorized conservation practice in the 2018 Farm Bill. As a result, farmers can now receive federal conservation payments for adopting prairie strips on their fields. To date, prairie strips now appear on over 115,000 acres of cropland in 14 states. 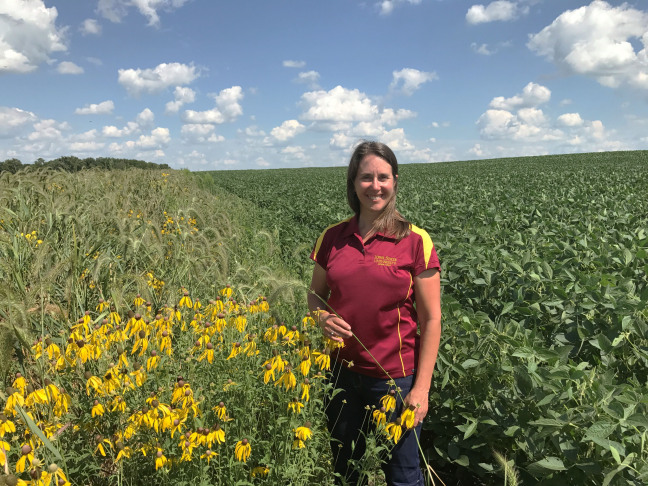 Schulte Moore has never had an extension appointment as part of her job, but she quickly figured out that building coalitions can help to bridge gaps in knowledge and communication. She’s taken what some might call an unorthodox approach by engaging various stakeholders, including farmers, economists, environmental advocacy groups and policymakers in her work. She’s also crossed disciplines rather than confining herself entirely to ecology and forestry. Instead, she takes a systems view and incorporates economics, sociology and engineering into her projects.

The approach is not without risk, Schulte Moore said. It’s likely taken time away from supporting her own lab and publishing research, but she said the MacArthur Fellowship validates some of the unusual decisions she’s made.

“Collaboration is the most rewarding facet of my career, both within and beyond the university,” she said. “I might not teach as many classes or produce as many papers as some other faculty, because I provide a unique role in terms of connecting people from different disciplines or different walks of life.”

The John D. and Catherine T. MacArthur Foundation announced Schulte Moore was one of 25 MacArthur Fellows for 2021 in late September. The foundation selects fellows that demonstrate exceptional creativity, promise for important future advances based on a track record of significant accomplishments and the potential for the fellowship to facilitate future creative work. Each fellow receives a $625,000, no-strings-attached award as part of the fellowship as an investment in the potential of their work.

Schulte Moore said the foundation had tried calling to notify her of the fellowship for about a week, but she didn’t pick up the phone because she didn’t recognize the number. The foundation then sent her an email asking if she could review a grant proposal unrelated to the fellowship. When she finally got on the phone with the foundation, the MacArthur representative asked her if she was alone and to verify her identity. That’s when the ruse was exposed and Schulte Moore knew this was going to be an unusual phone call. When the representative finally revealed that she’d been selected for a fellowship, Schulte Moore said she was stunned, thrilled and humbled.

“WHAAAT?” she recalls saying immediately after hearing the news.

“The big-picture problem I’m working on is that we all need to eat, and we all need a healthy, functioning planet too,” Schulte Moore said. “How do we achieve these goals simultaneously? I think it’s entirely possible, but we need science to help show us how. We also need collaboration. We need honest conversation and prioritization to get us there.”

Lisa Schulte Moore took some career risks while pursuing her vision of more sustainable agricultural systems, but it looks like the risks are paying off. Prairie strips, a conservation practice she and her colleagues have championed for over a decade, have been adopted in more than a dozen states. And in September, she received a prestigious MacArthur Fellowship.

“The big-picture problem I’m working on is that we all need to eat, and we all need a healthy, functioning planet too. How do we achieve these goals simultaneously? I think it’s entirely possible, but we need science to help show us how. We also need collaboration. We need honest conversation and prioritization to get us there.”