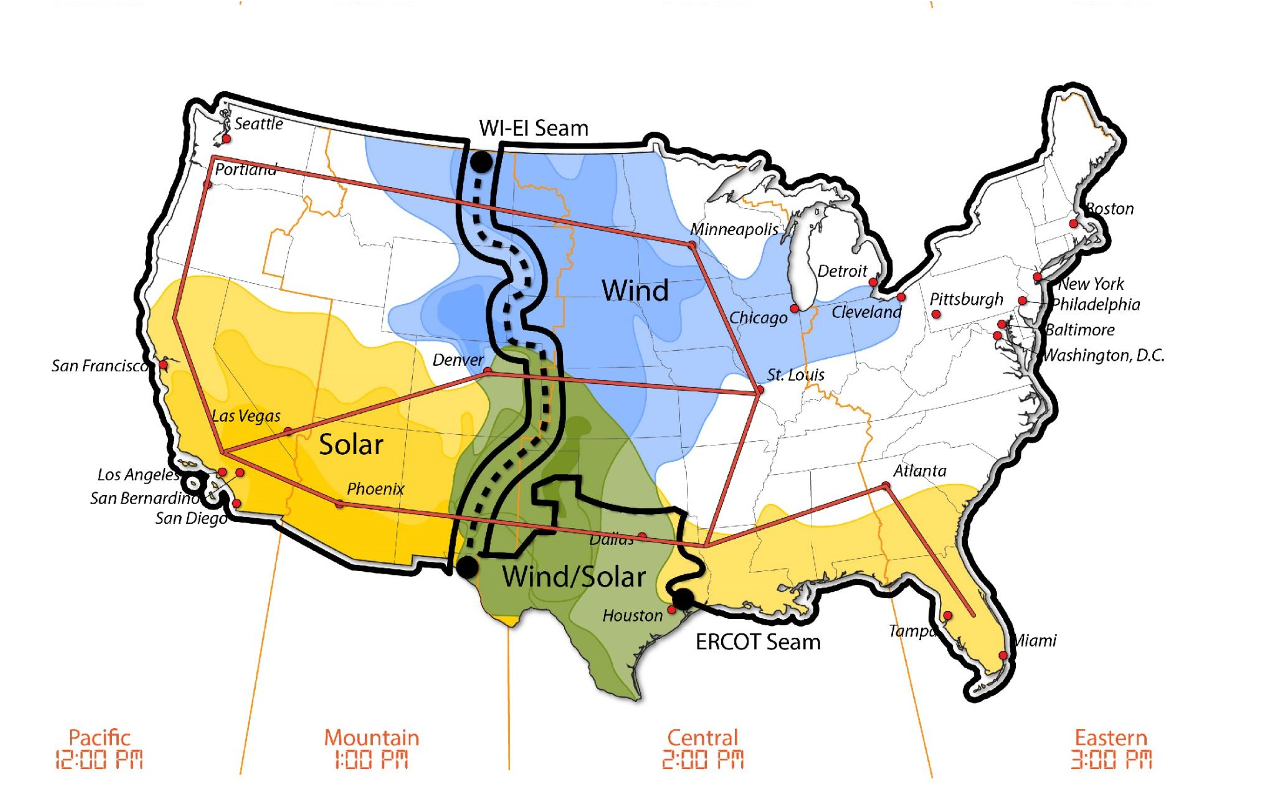 This map shows how a macrogrid (the red lines) could cross the seam separating the Eastern and Western interconnections, allowing most of the country to share electricity, including Midwest wind energy and Southwest solar energy. Larger image. Map courtesy of the Interconnections Seam Study, the U.S. Department of Energy's National Renewable Energy Laboratory.

AMES, Iowa – Two of the biggest power grids on the planet are connected by seven small threads.

Those seven threads (technically, they’re back-to-back, high-voltage, direct-current connections) join America’s Eastern and Western interconnections and have 1,320 megawatts of electric-power handling capacity. (The seam separating the grids runs, roughly, from eastern Montana, down the western borders of South Dakota, Nebraska and Kansas and along the western edges of the Oklahoma and Texas panhandles. Texas, with its own grid, is mostly outside the two big grids.)

And they are big grids – the eastern grid has a generating capacity of 700,000 megawatts and the western 250,000 megawatts. So, up to 1,320 megawatts isn’t much electricity moving between the two.

But what if there were bigger connections between the two grids? What if more power moved back and forth? Could that move Iowa wind power, Southwest solar power and Eastern off-shore wind power from coast to coast? Could the West help the East meet its peak demand, and vice versa? Would bigger connections boost grid reliability, resilience and adaptability? Would the benefits exceed the costs?

That’s according to the Interconnections Seam Study, a two-year, $1.5 million study launched as part of a $220 million Grid Modernization Initiative announced in January 2016 by the U.S. Department of Energy.

Researchers, including engineers from Iowa State University, shared early findings during a 2018 symposium at Iowa State and the latest findings in two papers published this summer and fall by IEEE, the Institute of Electrical and Electronics Engineers.

The Iowa State models took the grid-improvement process up to 2038. Researchers from the U.S. Department of Energy’s National Renewable Energy Laboratory in Colorado used the 2038 data to complete an hour-by-hour model of one year of power-sharing across the seam.

“The results show benefit-to-cost ratios that reach as high as 2.5, indicating significant value to increasing the transmission capacity between the interconnections under the cases considered, realized through sharing generation resources and flexibility across regions,” says a summary of the latest paper.

“So, for every dollar invested, you get up to $2.50 back,” said James McCalley, an Iowa State Anson Marston Distinguished Professor in Engineering, the Jack London Chair in Power Systems Engineering and a co-author of the papers.

How much would you have to invest?

McCalley said it would take an estimated $50 billion to build what researchers are calling a “macrogrid” of major transmission lines that loop around the Midwest and West, with branches filling in the middle and connecting to Texas and the Southeast.

The more transmission across the seam, the better, according to the researchers’ paper published this summer.

One key finding in the study: “Cross-seam transmission pays for itself: This shows that under conditions associated with a high-renewable future greater than 40%, cross-seam transmission beneﬁts exceeds costs, based only on a 35-year period to assess savings generated by generation investments and operational efﬁciencies.”

McCalley said the macrogrid pays for itself in three primary ways:

And what about storms – such as the derecho that blew across Iowa in August 2020 or the ice storm that cut off power to Texas in February 2021? Could a macrogrid help with those kinds of disasters?

“Another benefit of the macrogrid is being able to deal with these kind of resilience problems,” McCalley said. “You could get electricity assistance from other regions very simply. Iowa and other states would be interconnected with other areas.”

While studies are beginning to quantify the value of an American macrogrid, McCalley said there are many challenges to actually seeing one built. There’s cost, certainly. There are policy and political decisions that have to be made. And there are people who don’t want transmission lines, wind turbines or solar panels anywhere nearby.

What does he say to those people?

“My response has been that every form of energy has negatives,” McCalley said. “Tell me a better alternative.”

A "macrogrid" that increases the electricity moving between America's Eastern and Western interconnections, two of the biggest power grids on the planet, would more than pay for itself, according to research papers published this summer and fall by the Interconnections Seam Study. An Iowa State research team developed computer models for the study.

“Another benefit of the macrogrid is being able to deal with these kind of resilience problems. You could get electricity assistance from other regions very simply. Iowa and other states would be interconnected with other areas.”