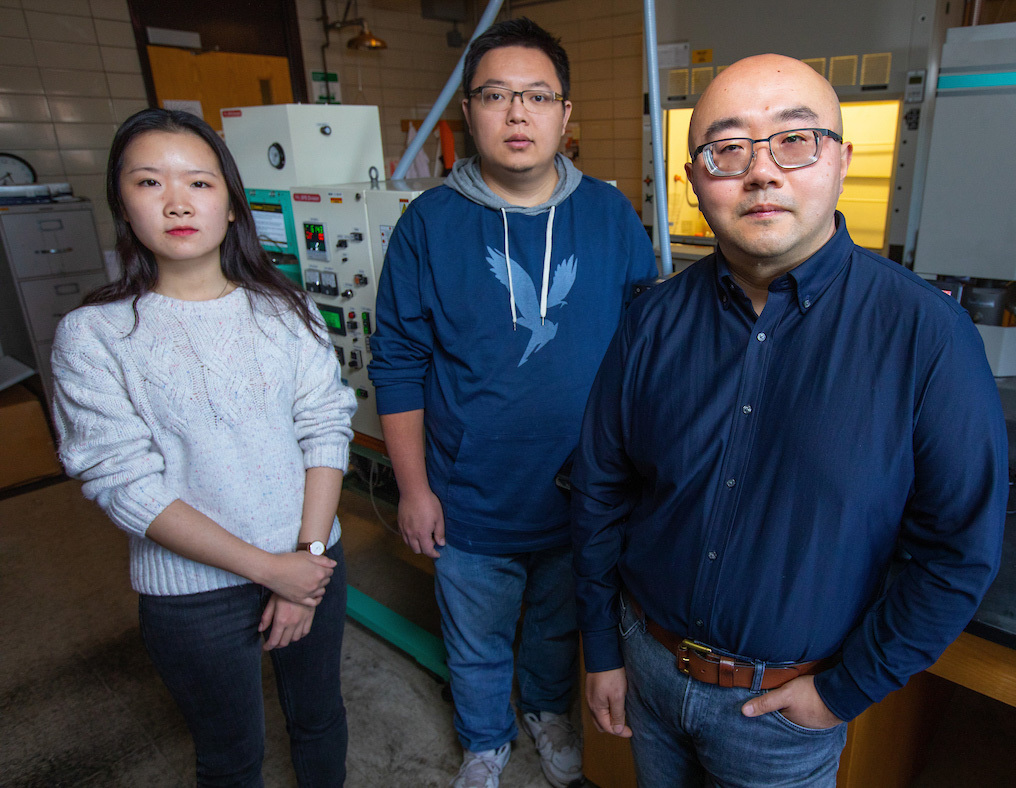 Chemical and biological engineers Yue Wu, professor, right, Xiaopeng Liu, doctoral student, left, and Fan Yang, postdoctoral research associate, center, are part of the team that's developed a catalyst that converts a greenhouse gas into chemicals used to make plastics and other materials. Behind the engineers is an instrument that uses spark plasma sintering to produce the catalyst. Larger photo. Photo by Christopher Gannon.

AMES, Iowa – Methane, which produces more warming than other greenhouse gases and is the subject of newly announced U.S. emission restrictions, is hard to break down and keep out of the atmosphere.

It’s not that the primary component of natural gas is chemically complex. A methane molecule is just one carbon atom and four hydrogens.

But those carbon-hydrogen bonds are hard to break.

Typically, that involves high temperatures and mixing the flammable gas with oxygen to produce syngas to make methanol and hydrogen to make ammonia. That’s expensive and potentially explosive.

Other conversion reactions aren’t very efficient and also produce the most abundant of the greenhouse gases, carbon dioxide.

So, is there another way to use methane and keep it out of the atmosphere? One that’s safe and efficient? One that returns value? One that helps fight climate change?

Yue Wu and his research group at Iowa State University have been looking for ways to do all that over several years of experimental failures and discoveries. Now, they and a group of collaborators have found and tested a catalyst technology that appears to be an answer.

“The results provided a potential solution to this long-time challenge and represented the best stability, conversion rate, and selectivity to convert methane to ethane or ethylene, two main precursors for the modern petrochemical industry,” according to a project summary written by Wu, the Herbert L. Stiles Professor in Chemical Engineering at Iowa State.

A research paper recently published in the journal Nature Catalysis reports the discovery. Wu and Yang Xiao, a senior research engineer in the Davidson School of Chemical Engineering at Purdue University in Indiana, are corresponding authors. Zhe Li, who earned a doctoral degree at Iowa State in 2019 and is now a postdoctoral fellow at Johns Hopkins University in Maryland, is the first author. (See sidebar for additional co-authors.)

The Iowa State University Office of Innovation Commercialization is seeking a patent for the technology.

The catalyst consists of one or two layers of platinum, each layer just an atom thick, deposited on two-dimensional metal carbide structures called “MXenes.” In this case, the structures are made from carbon, molybdenum and titanium.

Wu said his research group discovered the thin layers essentially allow every platinum atom to be used as a catalyst and prevents the formation of residues that cover and deactivate the platinum. That means less platinum is required to make the catalyst.

Wu said his group started studying carbides – combinations of carbon and metals – about five years ago with support from the Office of Naval Research. The original work was to identify the electrical and thermal properties of various carbides. But the work didn’t go as expected – the material’s thermal conductivity was much lower than predicted.

“You can think of this as a failure,” Wu said.

But, the researchers discovered the MXene surfaces are very active and able to absorb many molecules. And so, with support from Wu’s Stiles professorship and the Iowa State College of Engineering, Wu’s research group began studying these MXenes as a potential catalyst.

They started using the technology to remove hydrogen from shale gas, the natural gas found in shale rock formations. That work evolved to study other reactions involving natural gas.

“Nobody tried to use these carbides for these high-volume reactions before,” Wu said.

Keys to the methane-to-ethane/ethylene conversion are making the carbides pure enough and making the surfaces clean enough to support the reactions, Wu said. Get it all right, and those reactions exhibit about 7% methane conversion with about 95% selectivity toward ethane/ethylene in a continuously operating fixed-bed reactor. The products can be turned into plastics and resins, such as the common and ubiquitous polyethylene plastic.

“Remarkably, these novel catalysts run for 72 hours of continuous operation without any signs of deactivation, indicating a promising start toward technologies suitable for exploitation on the industrial scale,” Wu wrote.

The researchers’ new catalyst technology could advance those efforts to keep methane out of the atmosphere. Wu calls the technology “revolutionary,” saying it “opens the door to reducing the emission of methane and its combustion product, CO2, in the future.”

Iowa State University's Yue Wu and a multi-institution research team have discovered a catalyst that converts methane, the primary component of natural gas and a major greenhouse gas, into ethane and ethylene that can be turned into plastics and resins.

Yue Wu calls the catalyst technology “revolutionary,” saying it “opens the door to reducing the emission of methane and its combustion product, CO2, in the future.”

In addition to Yue Wu of Iowa State, Zhe Li of Johns Hopkins (formerly of Iowa State) and Yang Xiao of Purdue, the research team includes: