Janke recalls how he and his brother fashioned their own makeshift trap to net dark-eyed juncos, a species of small gray sparrow, that visited their mother’s feeder during their childhood in northwestern Indiana. The young brothers built a contraption that resembles a bownet trap, a common device used to safely snare various species of birds.

The homemade trap never worked, which Janke calls a blessing today. But the desire to study birds up close never diminished. Janke followed that passion to Iowa State University, where he serves as an assistant professor of natural resource ecology and management and a wildlife specialist for ISU Extension and Outreach. He studies the conditions that help birds thrive on the Midwestern landscape, and he works with Iowans across the state to protect wildlife and natural resources. Janke’s work equips Iowans to take better care of soil, water, plants and animals for generations to come.

His passion for birds has led him across the Corn Belt, and his experiences in the outdoors have taught him lessons that go far beyond ecology and biology. Hunting and camping expeditions with his friends and family reinforce his most important relationships, and the solitude he finds in nature provided him with clarity on his identity as a gay man.

Wherever his love of the outdoors takes him, he never goes long without looking up, his eyes scanning the skies for flapping wings and his ears attuned to birdsong.

“Birds, specifically, bring me joy everywhere I go,” he said.

An early love of wildlife

Janke said he wanted to pursue a college degree in wildlife from the moment he learned such degrees existed. Duck hunting with his family in Indiana fed his obsession with wildlife and the outdoors.

He completed an undergraduate degree at Purdue before earning a master’s degree in fisheries and wildlife at Ohio State University and a Ph.D. from South Dakota State University. He joined the faculty at Iowa State in 2016 as an assistant professor and an Extension wildlife specialist. Each stop in his education and career took him from one Midwestern state to another, and Janke said that was no accident.

He feels a deep connection to the Corn Belt and its landscape, which supports an abundance of biodiversity despite being heavily modified by agriculture and urbanization.

“I’ve always felt at home and at ease in these systems,” Janke said. “I like these landscapes. I like the subtle beauty of these places, and I like working towards land stewardship and environmental education here.”

At Iowa State, Janke’s research centers on how bird populations interact with agricultural landscapes. He studies the habitat that support birds and how it can be replicated on more farms. Janke partners with farmers, landowners, government agencies and wildlife conservation groups to improve the prospect that wildlife can flourish on working agricultural landscapes. 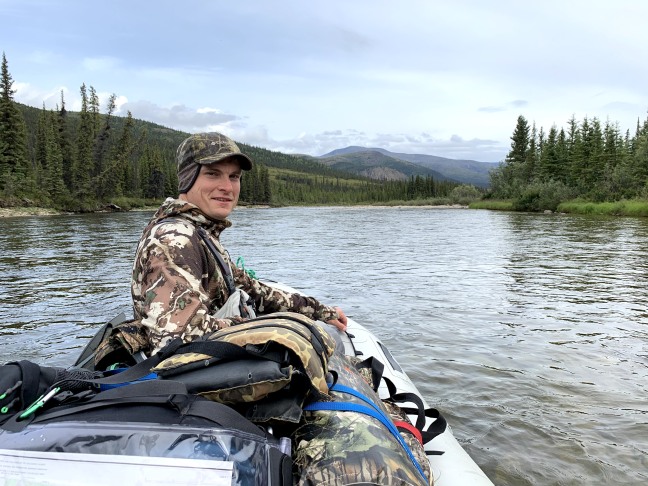 Janke hunting in Alaska in 2020. Janke said time in the wilderness has taught him lessons that go far beyond ecology and biology. Photo courtesy of Adam Janke. Larger image.

Finding himself in nature

Throughout his life, Janke said he internalized societal stereotypes and stigmas associated with being gay, and it took him a long time to overcome them and accept his own identity. The solitude of being alone in nature gave him the contemplative space to work through those difficulties, he said.

“That time alone without distraction and without external pressures was what it took for me to do the thinking that allowed me to confront and ultimately accept and ultimately be really proud of the identity I hold as a gay man,” he said.

Ecologists have long recognized how essential diversity is in healthy ecosystems. For instance, an ecosystem that’s become too homogenous is more susceptible to disease, invasive species or changes in weather than ecosystems that support a wide variety of plant and animal life. And ecologists delight in the sheer beauty provided by diversity in the natural world.

Janke said he applies that same philosophy beyond ecology and biology and into the realm of human interactions. Diversity of perspectives strengthens and beautifies society, just as it does ecosystems, he said.

As part of his Extension work, Janke leads statewide coordination of Iowa State’s Master Conservationist Program, which seeks to educate Iowans about how to protect the state’s land, water, wildlife and natural resources. The program features a seven-week curriculum composed of a combination of online and in-person instruction available to farmers, landowners, gardeners and anyone else with an interest in safeguarding Iowa’s natural resources.

ISU Extension and Outreach personnel offer the program in the spring, summer and fall, and interested Iowans can learn more on the Master Conservationist Program website.

“We hope those people [who complete the program] go out and improve land stewardship in their own backyard and tell their neighbors about it,” he said.

Adam Janke found himself in the wilderness. Now he works to protect Iowa’s wildlife and natural resources.

“I’ve always felt at home and at ease in these systems. I like these landscapes. I like the subtle beauty of these places, and I like working towards land stewardship and environmental education here.”