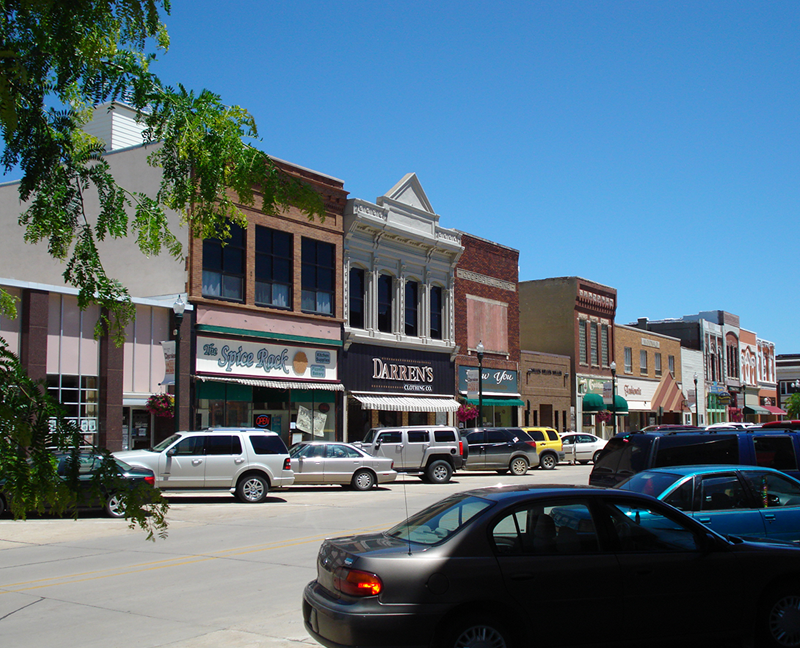 Cars fill up parking spots along Main Street in Cherokee, IA. Larger image. Courtesy of the ISU Department of Sociology and Criminal Justice.

AMES, IA – Many academics and journalists have written about rural “brain drain,” the migration of talented and bright young people who leave their communities, usually in search of better economic opportunities. But a team of Iowa State University researchers have identified three significant factors that draw people back to their hometowns a decade or two after leaving: public schools, population density and other college-degree-holders in the community.

The researchers’ findings, recently published in the academic journal Rural Sociology, reveal college graduates between 34 and 43 years of age were more likely to return to the rural communities where they grew up if they had a strong attachment to their public K-12 schools. Feeling like their teachers cared or that they were part of the school community and had close friends were significant drivers.

“We often hear that rural schools aren't as good as their urban counterparts, but here is an example where they are in a unique position to foster strong relationships and a sense of belonging, which can have long-term impacts,” said Stephanie Sowl, one of the paper’s co-authors and a Ph.D. candidate in higher education at Iowa State.

Sowl and the other ISU researchers also found college graduates between 34 and 43 years of age were more likely to return to the rural communities where they lived as teens if the communities had lower population densities and fewer postsecondary degree holders.

She said a possible explanation is that people felt like they could have a bigger impact in smaller hometowns, whether through volunteering, filling leadership roles or bringing in new ideas.

“When people return to these rural communities, there are not only population benefits and economic benefits, but also an influx of new skills and knowledge,” she said.

Sowl said people who return to their hometowns tend to be better positioned to create change and spur development because they already have connections and a better understanding of the community context.

“I think there's power in returning to a place where people know you,” said Sowl.

To identify the factors drawing college graduates back to rural communities, the ISU researchers pulled data from the National Longitudinal Study of Adolescent Health, which was designed to follow the health outcomes of youth through adulthood. The study has periodically surveyed and interviewed a national sample of 20,000 participants since the mid-1990s and includes data on community and environmental factors.

The ISU researchers looked at the longitudinal study’s first wave of data collected when the participants were in grades 7-12. The third wave provided the researchers with data from those who attended college away from home, and the fifth wave offered insights into college graduates between the ages of 34 and 43.

During their data analysis, the researchers found 23.1% of the college graduates between 34 and 43 years old had returned to the same county where they lived during the first wave of data collection, and for every one unit increase in school attachment, study participants were 66% more likely to return.

“A lot of the previous research on the migration of college graduates looked at people right after earning their degree; our study focuses on people in their mid-30s to early 40s who are going to be more stable and financially secure,” said Sowl. “During this life stage, they may also have a shift in priorities that would lead them back to their hometowns.”

Older college graduates may be more interested in a safe place to raise their kids, good schools, affordable housing and open space. Other life events, like needing to care for older relatives, divorce or taking over a family farm could also affect this decision to move back.

The researchers emphasized that understanding why people leave rural communities and what promotes their return could help local and state leaders enact targeted strategies to counter “brain drain” and support “brain gain.” They said their findings underscore the importance of investing in public K-12 schools and opportunities to foster a sense of belonging in youth. The researchers suggested schools and community partners introduce youth to careers in the area so that they are aware of opportunities later in life.

“Rural communities have a lot of assets that are hidden from the broader public. It’s important for all of us to look at those assets and understand how communities can draw people back home to create thriving, more equitable communities,” said Sowl.

Assistant Professors of Education Rachel Smith and Michael Brown contributed to the study.

Researchers found college graduates between 34 and 43 years of age were more likely to return to the rural communities where they grew up if they had a strong attachment to their public K-12 schools. Lower population density and overall education levels in a community also played a role.

“Rural communities have a lot of assets that are hidden from the broader public. It’s important for all of us to look at those assets and understand how communities can draw people back home to create thriving, more equitable communities.”