The cellular response that protects pigs from COVID-19 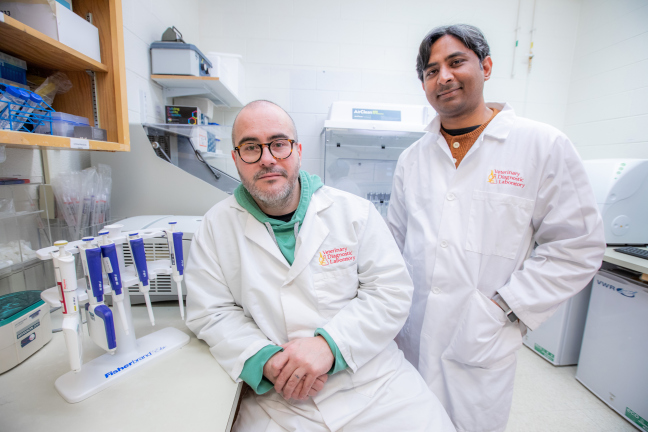 Luis Gimenez-Lirola, left, and Rahul Nelli in a lab at the ISU Veterinary Diagnostic Lab. Gimenez-Lirola and Nelli are studying the cellular mechanisms that keep pigs from getting sick after exposure to coronavirus. Photo by Christopher Gannon. Larger image.

AMES, Iowa – Iowa State University scientists may have uncovered an important clue that sheds light on why pigs don’t get sick when exposed to the coronavirus.

Studies since the start of the pandemic have noted that pigs can be infected by the virus if exposed to high doses, but the infection is self-limited and pigs don’t show clinical signs of disease nor do they transmit the virus to other animals. So Rahul Nelli, a research assistant professor of veterinary diagnostic and production animal medicine, and Luis Gimenez-Lirola, an associate professor of veterinary diagnostic and production animal medicine, set out to find out why in a newly published study in the academic journal Cell Death Discovery. What they found could lead to new ways to treat humans who contract COVID-19, the disease that results from infection by the virus SARS-CoV-2, said Nelli and Gimenez-Lirola.

Nelli and Gimenez-Lirola have studied how coronaviruses affect pigs for years. They’ve developed models that allow them to study in detail how viruses infect pigs and pig cells and how the cells respond to fight the infection. For the latest experiments, they introduced the virus to cultured porcine and human respiratory epithelial cells, which line most of the respiratory tract. They found the pig cells underwent apoptosis, or controlled cell death, in response to infection at a higher rate than human epithelial cells.

“When we looked under the microscope there was an interesting phenomenon going on inside the cells,” Nelli said. “The nuclei of the infected pig cells were starting to shred into fragments but not uninfected pig cells.”

That shredding of the nucleus is a telltale sign of apoptosis, which may be a key in helping pigs avoid symptoms after exposure to SARS-CoV-2. Triggering apoptosis early in the infection essentially causes minimal tissue damage and confines viral replication, thus limiting severe illness. Human cells can undergo apoptosis in response to coronavirus infection as well, but the study found human cells do so much less frequently than porcine cells. Pig cells are roughly 100 times more likely to undergo apoptosis than human cells, according to the study.

Human cells are more likely to go through necrosis, another form of cell death that’s less controlled than apoptosis. During necrosis, the contents of a cell release into the surrounding space, provoking a strong hyperimmune response that isn’t triggered during apoptosis.

The researchers surmise that a wide-scale apoptosis response is helpful for avoiding disease because it disposes of infected cells quickly without the immune system overreacting, while wide-scale necrosis and the resulting hyperimmune response is less favorable to host cells.

“We don’t want to over-conclude, but this response is probably something intrinsic to the pig immune system that is innate and not acquired,” Giminez-Lirola said. “The idea is to kill the virus subtly but fast enough so there’s not an excessive immune response triggered.”

The researchers said further study could lead to therapies designed to trigger apoptosis in human cells, allowing people infected with the coronavirus to avoid severe symptoms.

The next step for the ISU research team is to identify all the genes activated during the infectious process and compare them with other animal species in which those genes are present. That could give them further clues about how and why other animals, such as deer, can carry the virus without suffering symptoms of disease.

Studies since the start of the pandemic have noted that pigs exposed to the coronavirus don’t show clinical signs of disease nor do they transmit the virus to other animals. Iowa State University scientists have uncovered important clues that shed light on why pigs don’t get sick, and the discovery could lead to better treatments for COVID-19 in humans.

“When we looked under the microscope there was an interesting phenomenon going on inside the cells. The nuclei of the infected pig cells were starting to shred into fragments but not uninfected pig cells.”