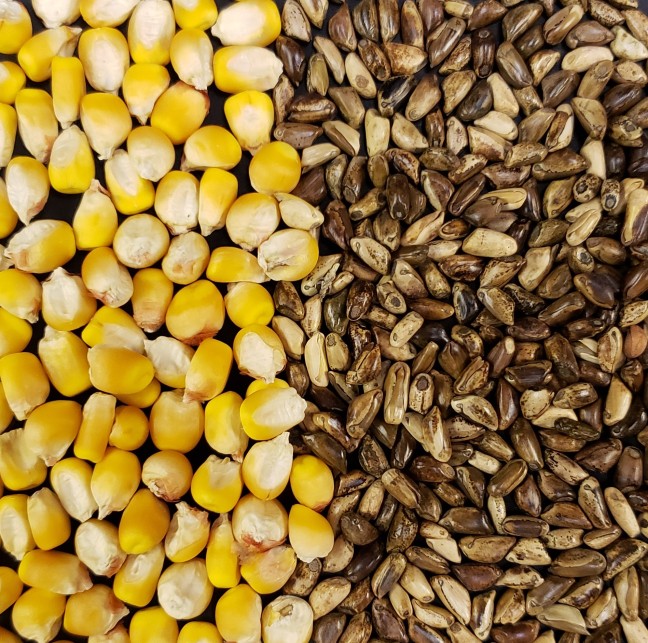 Kernels of corn on the left contrast sharply with the grain produced by teosinte, pictured on the right. Humans began domesticating teosinte thousands of years ago as they developed modern corn. Image courtesy of Kan Wang. Larger image.

Iowa State University scientists are learning how to peer back through millennia of domestication to learn how a wild grassy plant known as teosinte developed into corn, the modern cash crop grown across the globe. The research allows scientists to compare genes in corn against its wild ancestor, which could help plant breeders identify advantageous traits that may have been bred out of teosinte over the centuries.

The researchers published their findings recently in the academic journal Frontiers of Plant Science, detailing a new biotech tool that harnesses cutting-edge techniques to produce fertile transgenic teosinte plants for the first time.

Humans began domesticating teosinte, a wild grass native to Mexico, roughly 10,000 years ago. Each teosinte plant yields only up to a dozen kernels, which are tough and contain less nutrients than modern corn. So people selected individual teosinte plants for higher yields, eventually developing new varieties with their own unique traits.

But some of the original genetic material from teosinte got lost along the way. Identifying this genetic material could help breed better corn today, or at least offer scientists clues about how to better harness the genetic diversity of corn, said Jacob Zobrist, a graduate student in agronomy and first author of the study.

“We don’t know what we don’t know about those ancestor traits,” Zobrist said. “It’s our hope to identify traits in the wild ancestor that would be helpful for modern maize. Those traits could include disease resistance and stress resistance as well as nutrient content and maybe even improving growing and flowering times.”

The new study details how the scientists discovered a robust callus induction and regeneration protocol using whorl segments of seedlings germinated from mature seeds. That means the researchers were able to produce callus tissue, which is similar to stem cells that are undifferentiated and haven’t yet developed into variant cells.

These undifferentiated callus cells are amenable to the introduction of new DNA via transgenic technology. Using gene editing technology such as CRISPR, researchers can now target specific teosinte genes and switch them off, giving them a new level of understanding of how the wild plant was domesticated into a global staple crop.

It's a little bit like reaching back through time to see what traits ancient plant breeders selected for, said Kan Wang, the Global Professor of Biotechnology in agronomy and corresponding author of the study. Wang’s laboratory began studying teosinte in 2010, and she said the new publication represents a major step forward in understanding teosinte and the origins of modern corn.

“This is going to open up a lot of possibilities for many people who are interested in either basic research or agricultural applied research,” said Wang, who is currently a rotating program director for the National Science Foundation.

Wang credited Zobrist’s contributions for making the overall study a success. Zobrist joined Wang’s lab in 2018 with support from the National Science Foundation’s Predictive Plant Phenomics Fellowship, which provides innovative data-enabled science and engineering training to students with experience in plant sciences. Zobrist’s contribution to the research was to make the transformation repeatable by optimizing the culture medium used to grow the teosinte plants. Zobrist found a new tissue-culture regimen that included plant hormones in the growth medium.

“We’ve developed the tool, and without it, it’s very difficult to understand teosinte. One of the main players who made that happen was Jacob. He did critical work,” Wang said.

Zobrist is a native of Spencer, Iowa. He completed his undergraduate studies at Iowa State before taking a job with Corteva for five years and then returning to Iowa State to begin graduate work in 2017.

“I am fortunate to be a graduate student at a time when research and genome editing technologies are progressing at a rate that allowed me to put all of the pieces together into a functional and reproducible transformation method,” he said.

Other co-authors of the study include Susana Martin-Ortigosa, Keunsub Lee, Qing Ji and Mercy Azanu, all current or former members of Wang’s lab.

Iowa State University scientists have harnessed gene editing to peer back through thousands of years of domestication to learn about teosinte, the wild ancestor of modern corn. The research allows for genetic comparisons and could lead to more resilient crops.

“We don’t know what we don’t know about those ancestor traits. It’s our hope to identify traits in the wild ancestor that would be helpful for modern maize. Those traits could include disease resistance and stress resistance as well as nutrient content and maybe even improving growing and flowering times.” 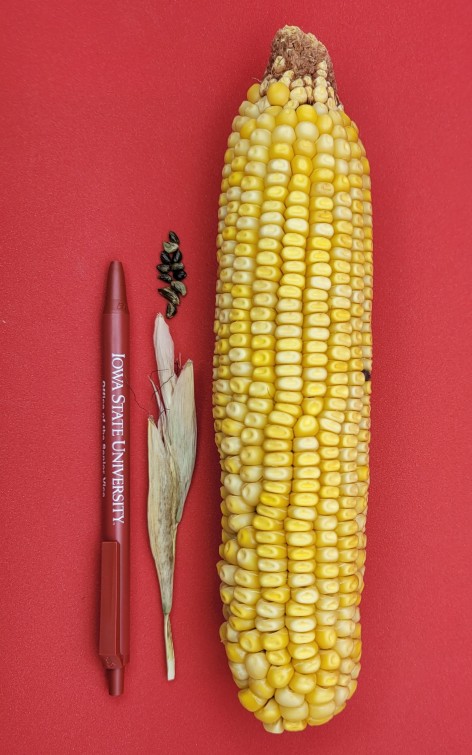 Teosinte plants, like the one pictured at left, produce only up to a dozen kernels. Ears of corn, like the one on the right, produce hundreds of kernels. Image courtesy of Kan Wang. Larger image.