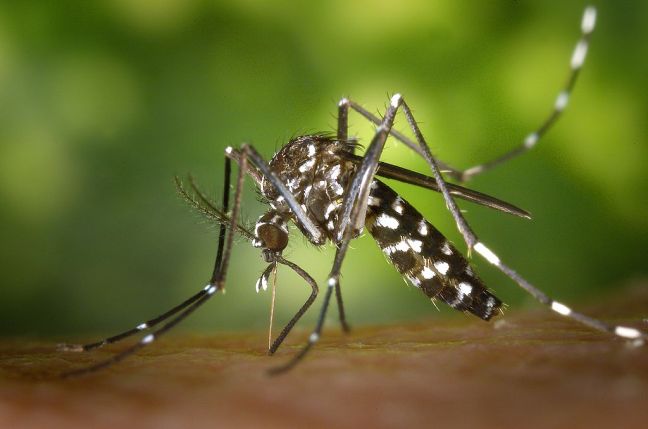 Mosquito surveillance efforts led by Iowa State University entomologists uncovered evidence that the invasive mosquito species known as Aedes albopictus for the first time is surviving the winter in three Iowa counties, allowing the species to establish itself in those locations. Previously, the species, which is capable of transmitting several diseases through its bite, had overwintered in regions of Illinois and Missouri while making seasonal appearances in Iowa, Minnesota and Wisconsin. But it was thought Iowa’s harsh winters kept the species from making a permanent home in Iowa, said Ryan Smith, an associate professor of entomology and the director of the ISU Medical Entomology Laboratory.

“For a long time, it was thought that these mosquitoes wouldn’t survive the winter here,” Smith said. “Our data show they’re here, and they seem to be spreading.”

Aedes albopictus mosquitoes first showed up in the United States in 1985 in Texas. The species has expanded its territory gradually since then and can be found in more than 26 states today.  A new study from Smith and his colleagues based on data gathered by the Medical Entomology Laboratory suggests the species has established itself in Lee and Des Moines counties in southeastern Iowa along the Mississippi River, and in Polk County in central Iowa. The study was published this week in the peer-reviewed academic journal Scientific Reports.

Aedes albopictus mosquitoes don’t spread West Nile Virus, which is the disease most commonly transmitted by mosquitoes in Iowa. But the species is a competent vector for Zika, chikungunya and dengue viruses, which can all cause serious health problems in humans. Smith said Iowans should be aware the species appears to have taken root in some parts of the state, but the species’ presence shouldn’t cause panic.

Those diseases are rare in Iowa and almost always require someone to contract the disease in a tropical region where the viruses are more common. The infected person would then have to travel to Iowa and get bitten by an Aedes albopictus mosquito for that mosquito to transmit the pathogen to other humans.

“Just be aware that they’re here, and they have the potential to spread,” Smith said. “Pay attention to neglected materials in the yard that could allow them to lay eggs.”

Smith said Iowans may be able to notice the Aedes albopictus mosquitoes with the naked eye. The species has a distinctive white racing stripe along their backs that can help distinguish them from other species common in the state. They tend to be most active in late summer.

Smith said the mosquitoes may have entered the three counties mentioned in the study by hitching a ride on debris or other materials that contained their eggs. Mosquitoes lay eggs on the landscape that remain dormant through the winter until warmer temperatures return. It’s likely Aedes albopictus eggs were carried across the Mississippi River unintentionally into Lee and Des Moines counties, he said. The species seems to prefer urban and suburban environments rather than rural regions. That may suggest the mosquitoes are able to find structures in urban areas that help their eggs survive the winter, Smith said.

The Medical Entomology Laboratory monitors mosquito populations across the state using a network of traps to collect population samples. The laboratory launched an effort to track Aedes albopictus in 2016 that has utilized traps in around 30 Iowa counties.

Though it appears the species has established itself in only three counties, that number is likely to rise in the years ahead, Smith said.

“Exactly how fast and what counties they’ll expand to is unclear, but it is a question that we are continuing to follow,” he said.

This study was possible through close cooperation with the Iowa Department of Public Health and several local public health partners throughout the state.

An invasive species of mosquito has established itself in three Iowa counties, according to data from Iowa State University entomologists. The species is capable of transmitting disease, but ISU experts said the species’ arrival is no cause for alarm.

“For a long time, it was thought that these mosquitoes wouldn’t survive the winter here. Our data show they’re here, and they seem to be spreading.”

Ryan Smith, associate professor of entomology and the director of the ISU Medical Entomology Laboratory