Unraveling the connections between singing and Parkinson’s disease

AMES, IA – In a small lab decorated with a poster of colorful MRI brain scans, Elizabeth Stegemoller hits a stopwatch to record how long a participant in her study can sustain the vowel sound “ah” before taking a breath. They run through this a few times before Stegemoller moves on to measure the participant’s range of pitch and volume using an app on her phone.

As an associate professor of kinesiology at Iowa State University and music therapist with a Ph.D. in neuroscience, Stegemoller has spent her career exploring the connections between music and health. Specifically, she’s interested in the ways singing can stave off symptoms of Parkinson’s disease, the second-most common neurodegenerative disorder in the U.S. 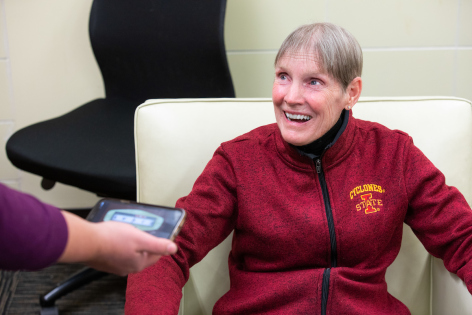 With a three-year grant from the National Endowment for the Arts, Stegemoller and her team at ISU are embarking on an in-depth and comprehensive study to determine the underlying mechanisms by which singing can improve breathing and swallowing for people with Parkinson’s disease. The researchers will also track changes to brain activity and biomarkers of stress and inflammation to better understand how the social benefits of singing with others can slow the disease’s progression and its symptoms.

Parkinson’s disease affects an area of the brain that controls movement, and while medications can help, Stegemoller explained they are often expensive, cause side effects and do not treat all the symptoms.

“One drug may affect how someone moves, but then that person may need to take another drug for depression and another drug for constipation. Music may not be able to treat constipation, but developing an optimal music therapy could address how people with Parkinson’s disease move, their stress level, their bonding and social experiences, depression and anxiety,” said Stegemoller.

Most medications also fall significantly short in addressing impairments to speaking, swallowing and breathing, which nearly 90% of people with Parkinson’s disease experience.  These impairments not only affect a person’s quality of life, but also make it easier for liquids to enter the lungs. Without the muscle strength to cough it out, they’re at a higher risk of developing aspiration pneumonia, a leading cause of death for people with Parkinson’s disease. 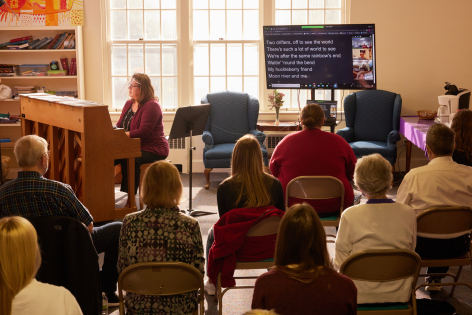 “When we sing, however, it's like we're doing little mini exercises for the same muscles you use to swallow, breathe and cough to make them stronger and work together,” Stegemoller explained.

In 2016, Stegemoller and her team led a groundbreaking study that showed singing may be protective against aspiration pneumonia by significantly improving respiratory and swallow control. Participants in the study attended weekly group singing sessions for two months, and in a follow-up study, they reported feeling less stress and a greater sense of camaraderie with the other people in the group.

“This new study really pulls together a lot of previous research we’ve already done but for a longer period of time. This will help us understand the physical benefits from singing, like stronger swallowing muscles, as well as the social benefits of group singing that could have a big impact on brain activity and how the body responds to stress,” said Stegemoller.

The researchers recently collected the first set of baseline data from the participants in their new study. They’ll run the same tests before and after 16 weeks of group singing sessions later this spring to track changes.

Back in the lab

After the participant blows into a respiratory pressure meter to measure the strength of her breath, Stegemoller walks over to a cupboard.

“Do you prefer chocolate or vanilla pudding?” Stegemoller asks. The participant says she would like chocolate, joking that it is its own food group. 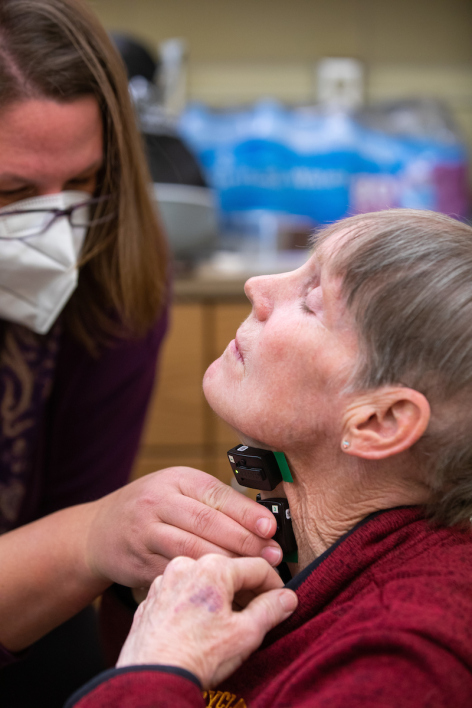 Stegemoller sets the chocolate pudding cup and spoon on the counter before sticking four EMG electrodes with small, green lights on the front of the participant’s neck. Small peaks show up on a computer graph each time the participant swallows a spoonful of pudding. Stegemoller asks the participant to repeat the swallow test with water.

To test brain activity, Stegemoller pulls out something that looks like a pool vacuum head. She rests the “single-pulse transcranial magnetic stimulation coil” on the participant’s head. It sends a signal to the participant’s primary motor cortex, an area of the brain that controls hand and mouth movements. The EMG electrodes on the participant’s neck pick up the signal, which shows as a peak on the computer graph.

Stegemoller also collects a blood sample to measure a type of protein linked to inflammation and a saliva sample to measure oxytocin (a hormone that supports bonding with other people and supports brain health) and cortisol (a hormone associated with stress.) She explains prolonged stress weakens the body’s ability to ward off infections and increases inflammation, which can damage and kill brain cells.

To serve as a comparison in their study, Stegemoller and the other researchers will run the same tests for older adults who do not have Parkinson’s disease and do not participate in the group singing sessions. They’ll also try to control for the many variables that could affect their study results by asking all participants about recent life events that would increase stress, how long they’ve had Parkinson’s disease, and what previous singing and music experience they have had.

Recent research has shown lullabies, regardless of the language, soothe babies and their exhausted parents. Songs with certain tempos help runners and shoppers set a faster pace, and simply hearing the opening riff of a favorite tune can release feel-good hormones.

While music and other forms of art are gaining recognition for their potential to improve health outcomes, Stegemoller and the other ISU researchers say it’s important to understand exactly how these therapies affect the human system. Filling this knowledge gap could open doors to more funding for art therapies and reimbursements with insurance. But most importantly, the results could lay the groundwork for designing treatments that will have the most impact on improving the overall health of people with Parkinson’s disease.

“We know music is a powerful tool for health and healing. This research project will get us a little closer to understanding why,” said Stegemoller.

ISU researchers are embarking on an in-depth and comprehensive study to determine the underlying mechanisms by which singing can improve breathing and swallowing for people with Parkinson’s disease. The researchers will also track changes to brain activity and biomarkers of stress and inflammation to better understand how the social benefits of singing with others can slow the disease’s progression and its symptoms.

“Music may not be able to treat constipation, but developing an optimal music therapy could address how people with Parkinson’s disease move, their stress level, their bonding and social experiences, depression and anxiety.”