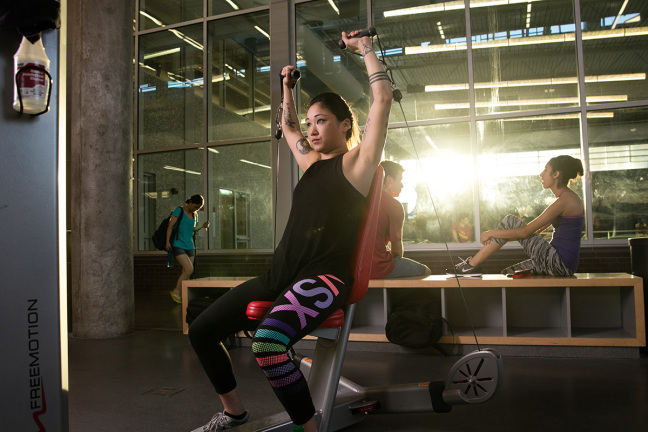 Among the participants who were not getting at least 7 hours of sleep at the study’s start, sleep duration increased by an average of 40 minutes in the resistance exercise-only group. Larger image. Courtesy of ISU Recreation Services.

“Our study shows resistance exercise goes above and beyond the benefits you would see from these other types of exercise in terms of sleep quality,” said Angelique Brellenthin, assistant professor of kinesiology at ISU. “If people are concerned about their sleep and have a limited amount of time to exercise, they may want to consider prioritizing resistance workouts.”

At the start of the study, over 400 adult participants who met certain criteria (i.e., being overweight or obese, having elevated blood pressure, not active) were randomly assigned to one of three exercise groups or a non-exercise group.

Those in the aerobic exercise-only group walked or jogged on treadmills or opted for elliptical machines or stationary bikes. The machines automatically monitored the participants’ heart rates to ensure they kept a pace in the moderate-to-vigorous intensity zone.

Participants in the combined exercise group completed 30 minutes of cardio, followed by another 30 minutes of resistance training.

All of the participants filled out a widely-used, detailed sleep questionnaire throughout the study.

The researchers found more than one-third of all participants reported poor quality sleep at the start of the study.

Among the 42% of participants who were not getting at least 7 hours of sleep at the study’s start, sleep duration increased by an average of 40 minutes in the resistance exercise-only group compared to an average increase of 18 minutes in the other groups, including the group that did not exercise.

People in the resistance exercise-only group also reported falling asleep an average of 3 minutes faster at the end of the 12 months. The researchers found no notable change in the other groups.

Sleep efficiency (i.e., how much time asleep divided by the total time in bed) increased for participants in the resistance exercise and combined exercise groups but not in the aerobic or control groups.

“While there’s no definitive answer as to why humans sleep, one theory is that sleep provides the body an opportunity to restore different systems,” said Brellenthin. “Because resistance exercise is a powerful stimulus that causes stress to the muscle tissue, that stimulus may send a stronger signal to the brain that this person needs to sleep and to sleep deeply to repair, restore and adapt the muscle tissue for the next time they need it.”

The findings presented Thursday are part of a larger study, led by ISU Associate Professor of Kinesiology Duck-chul Lee, investigating the effects of different types of exercise on multiple aspects of heart health.

Brellenthin said many studies have looked at specific health benefits from aerobic exercise or resistance exercise alone, but very few have directly compared the two types of exercise in one study or included a combined exercise group.

To have three types of exercise and over 400 participants representing the general public in a long exercise trial is very unique, she added.

“If people are concerned about their sleep and have a limited amount of time to exercise, they may want to consider prioritizing resistance workouts.”