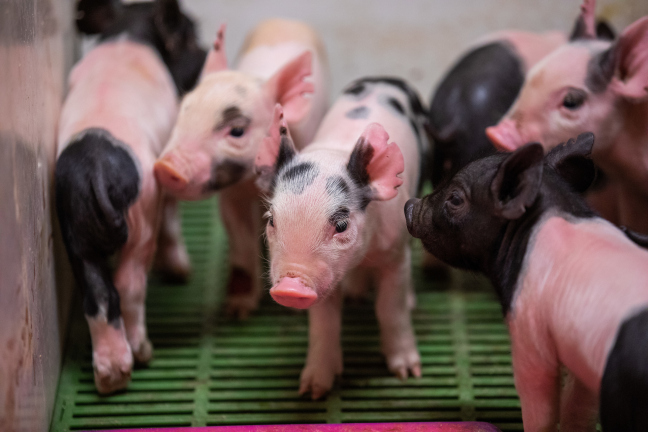 ISU veterinarians are helping to contain an outbreak of the bacteria Actinobacillus pleuropneumoniae among central Iowa pork production facilities. The bacteria are normally managed with antibiotics, but the current strain has proven to be especially threatening. Photo by Christopher Gannon. Larger image.

AMES, Iowa – Iowa State University veterinarians have taken on the role of gumshoe detectives as they investigate how an aggressive bacterial strain has spread among central Iowa pork production facilities.

The bacteria, called Actinobacillus pleuropneumoniae (APP), has showed up in nine central Iowa pork production systems since late November. It attacks a pig’s respiratory system and can cause death quickly after the first symptoms emerge. ISU veterinarians are sequencing the genome of the bacteria and, with funding from the Swine Health Information Center, piecing together clues indicating how the bacteria spread. They’re also developing protocols to contain the bacteria and coordinating with pork producers and local veterinarians to minimize the disease’s impact.

The U.S. pork industry has dealt with a number of serotypes, or strains, of APP since the 1960s, said Dr. Marcelo Almeida, a clinical assistant professor of veterinary diagnostic and production animal medicine. Producers and veterinarians learned to manage the disease, so it rarely causes serious problems, although some serotypes still circulate among herds. Almeida said the ISU Veterinary Diagnostic Laboratory confirms between 70 and 80 cases of APP in pigs every year, but most years do not see an unusual outbreak like this one, which has caused mortality of up to 50% in infected herds.

The central Iowa outbreak is unusual because of its concentration, with all the affected production systems within a roughly 20-mile radius, said Dr. Derald Holtkamp, professor of veterinary diagnostic and production animal medicine. The bacteria most often spread via physical contact and generally don’t survive long in the environment.

“It’s a disease that, according to the textbook, shouldn’t be very easily transmitted from one herd to another,” Holtkamp said. “But in this case, it’s moved around a fair amount.”

The bacteria can be treated with an injection of antibiotics, but the disease strikes so quickly that pigs can die just hours after showing the first symptoms, which include fever, coughing and open-mouth breathing.

The serotype behind the central Iowa outbreak had not shown such virulence in the past, so the ISU veterinarians are working to sequence the whole genome of bacteria samples taken from affected production systems. The data generated from those sequences will help the veterinarians determine if the serotype has evolved or acquired new genes to make it more virulent than in the past. The veterinarians have gathered samples from each affected site and will compare the genomic data of each sample.

“It’s likely we’ll find some small differences in the samples, and we’ll have to understand the intricacies of these bacteria to see what differences are relevant and which ones aren’t,” Almeida said.

The sequencing process, along with additional bioinformatics analysis of the genomes, will take two to four more weeks.

In the meantime, ISU veterinarians are working with producers and local veterinarians to shore up biocontainment procedures to keep the bacteria from spreading. That means reworking procedures and schedules so employees and equipment don’t transport the bacteria from an infected location to an uninfected one. The ISU veterinarians are also sleuthing out all possible avenues that could have contributed to the outbreak. They’re looking at feed delivery schedules, rendering processes, transport of animals, equipment maintenance and other possible contributing factors.

ISU veterinarians are also continuously coordinating with local vets to stay on top of new cases. The Swine Medicine Education Center at Iowa State organized a webinar with various stakeholders to help producers strengthen their biocontainment measures and preparedness.

Holtkamp stressed that the bacteria has never been shown to pose a threat to humans, nor does it make pork unsafe to eat.

Iowa State University veterinarians are sleuthing out all possible avenues that could have contributed to the spread of a bacterial strain among central Iowa pork production facilities. The veterinarians are sequencing the genome of the bacteria, called Actinobacillus pleuropneumoniae, and developing protocols to contain it.

“It’s a disease that, according to the textbook, shouldn’t be very easily transmitted from one herd to another. But in this case, it’s moved around a fair amount.” 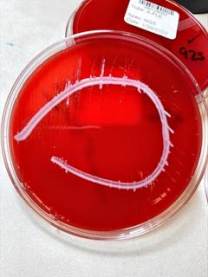