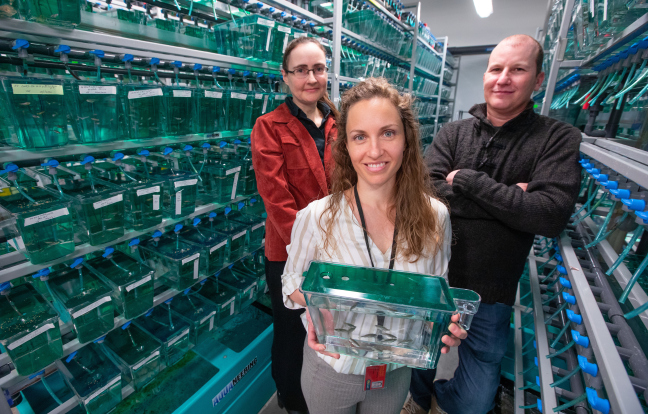 Raquel Espin Palazon (center) in the zebrafish room in the basement of the Advanced Teaching and Research Building. She is with Karin Dorman, left, and Clyde Campbell, coinvestigators on a grant to study a genetic pathway that plays a critical role in the generation of blood stem cells. Photo by Christopher Gannon. Larger image.

AMES, Iowa – The ability to generate a patient’s blood cells in order to treat blood diseases has eluded scientists for years, but a recently awarded federal grant could help Iowa State University scientists take critical steps toward turning that possibility into reality.

Raquel Espin Palazon, an assistant professor of genetics, development and cell biology, leads an interdisciplinary research team examining a genetic pathway triggered when cells undergo inflammation due to injury or infection. Espin Palazon said the genetic pathway also plays an important role in the development of blood stem cells, or undifferentiated cells with the potential to develop into all human blood cell types.

The researchers received a 5-year, roughly $2 million grant from the National Institutes of Health to build on their work studying the pathway both in human cells and in zebrafish, and Espin Palazon said the work shows great potential to spark new advances in regenerative medicine.

Espin Palazon said it would be ideal if doctors could generate healthy blood cells from the patient for their subsequent transplantation to treat disease. Doing so would likely require the healthy cells to undergo a process turning them into stem cells, which could then be transformed into whatever cell type is needed for treatment.

Espin Palazon said scientists have not yet discovered all the molecular changes needed to make those transformations possible. But her previous research uncovered that an inflammatory pathway could play an important role. When cells become injured or experience infection, the pathway activates a response to help the cells fight off infection.

“We want to be able to understand at a molecular level what these inflammatory signals are doing,” Espin Palazon said. “We don’t know why they are required or what they are changing in the cell to generate blood stem cells, so we’re going to try to understand that and the timing required.”

Espin Palazon said it isn’t clear what connects the inflammatory pathway with stem cell production, but research has uncovered a few clues. The researchers hypothesize that the pathway preserves the stemness of cells, or the undifferentiated states that characterizes stem cells. Once the cells differentiate, they can perform only limited functions and can’t revert back into stem cells.

“We think inflammatory signals are important to keep the cells in the stem-cell stage so they don’t differentiate into mature cells,” she said.

Timing is a crucial piece of the puzzle, she said. The pathway is likely triggered at critical stages of embryonic development to create stem cells, so the scientists will have to untangle precisely when to activate the pathway to induce the desired changes in cells.

The researchers will study human blood cells in a lab setting as well as blood cells from zebrafish to answer their questions. Espin Palazon said zebrafish make outstanding model organisms because their embryos are transparent and develop externally, allowing for easy observation of their development under a microscope.

Iowa State University scientists are examining a genetic pathway triggered when cells undergo inflammation due to injury or infection that also plays an important role in the development of blood stem cells. The research could lead to the ability to treat blood diseases by regenerating a patient’s blood cells.

“We want to be able to understand at a molecular level what these inflammatory signals are doing. We don’t know why they are required or what they are changing in the cell to generate blood stem cells, so we’re going to try to understand that and the timing required.”