Iowa Insect Pageant: A celebration of entomology, jazz and puppetry 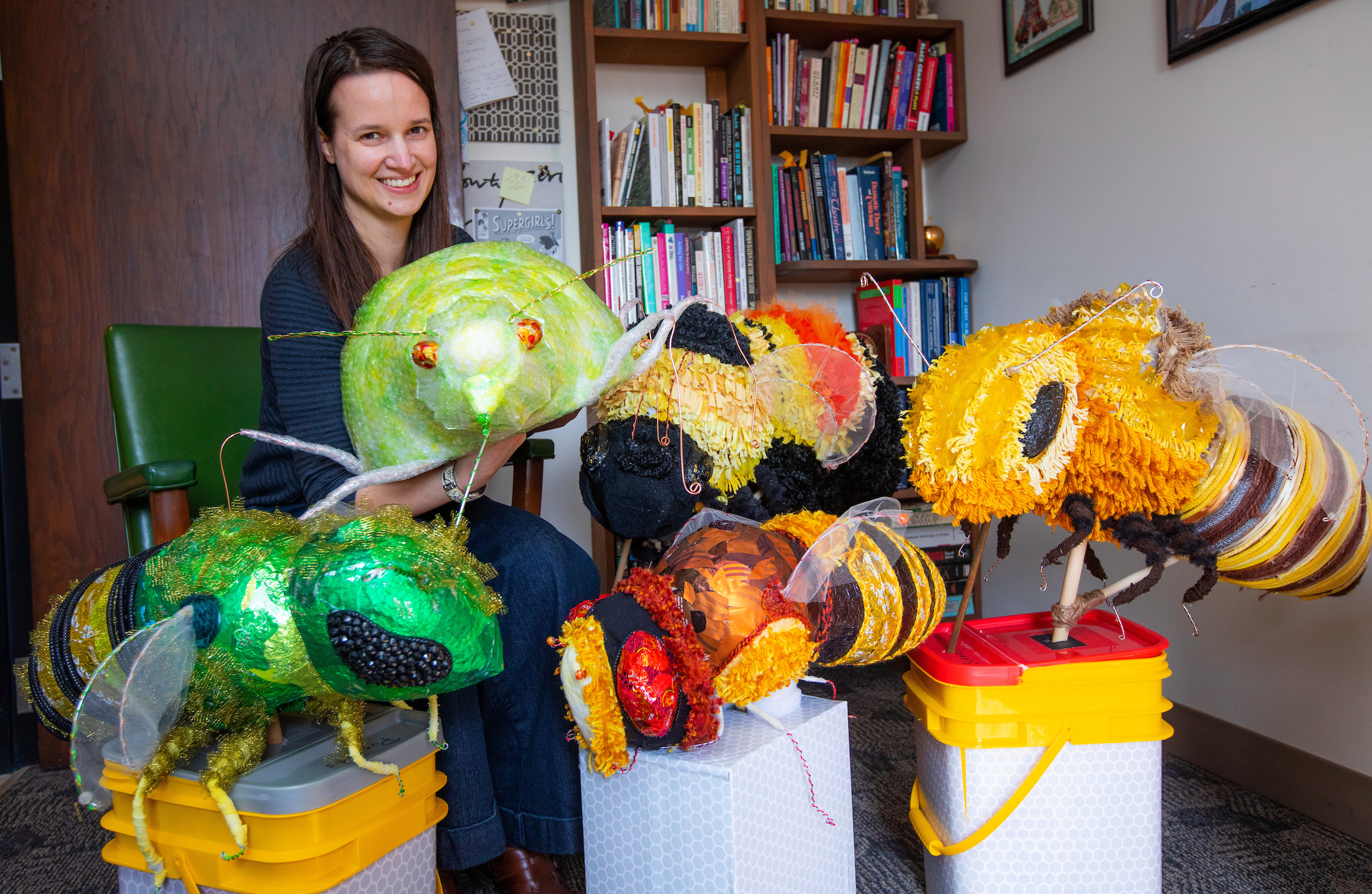 Amanda Petefish-Schrag, Associate Professor of Theatre, surrounded by some of the insect puppets that will be on display this week in the Iowa Insect Pageant the last week of April, 2022. Larger image. Christopher Gannon/Iowa State University

AMES, IA – On a Saturday morning in Carver Hall, Iowa State University Student and Stage Manager Ashley Oxenreider calls out, “Places. Cuing music,” before hitting the play button on her laptop. A jazz drummer’s brushes swirling a snare cause several larger-than-life bees to vibrate into existence at the front of the classroom.

Puppeteer and student Piper Smith lifts and lowers a large dowel that’s supporting the rusty patched bumble bee’s torso. She twists another to turn the pollinator’s head from side to side. A closer inspection reveals the bee’s gleaming black eyes are coils of beaded necklaces and the bright stripe that gives the rusty patched bumble bee its name is shredded plastic netting that once held oranges.

The students’ rehearsal is for the upcoming Iowa Insect Pageant on Thursday, April 28, on ISU’s Central Campus and Saturday, April 30, at Ames Bandshell Park. The two performances, free and open to the public, are intended to “delight and awe” audiences and bring attention to the fascinating and complex world of insects, explains Amanda Petefish-Schrag, a puppeteer, playwright and associate professor of theatre at ISU.

“This is an outdoor performance that really leans into the pageant structure. Different Iowa insects will be featured with a focus on their unique ‘talent’ or beauty,” says Petefish-Schrag.

The production is a unique collaboration between the arts and sciences at ISU with original music composed by Teaching Professor of Music Mike Giles and performed by the ISU jazzONE ensemble he directs; insect expertise and guidance from Entomology Professor Matt O’Neal; and Petefish-Schrag's team of puppets and puppeteers. 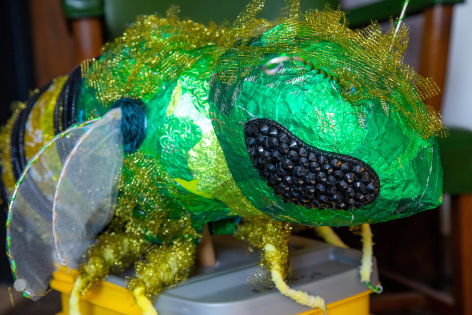 Along the sides of the rehearsal space, dozens of puppets – some the size of platters, others larger than coffee tables – lie motionless.

“Puppets without a puppeteer are just objects. They are essentially 'dead' until a puppeteer expresses something through that object, giving it life,” says Petefish-Schrag.

She explains good puppetry creates an ongoing contradiction in the performance.

“You see a manipulated object that you know isn’t alive, yet you respond to it as though it is. There’s something both strange and a bit magical about seeing a familiar object or collection of materials suddenly gain personality and essence.”

Several staff and faculty, a few community members and more than two dozen students designed and constructed the giant insect puppets over the fall and spring semesters using discarded materials. Petefish-Schrag says working with plastic, food wrappers and other “trash” makes the puppet-building process more challenging, but also pushes the puppeteer to think about what a material is and what it could be.

"And since this project specifically deals with ecology, there is also an added element of commitment to repurposing and recycling, recognizing that the material choices puppeteers make have impacts not just on the puppets, but on the community itself,” she says.

Piper Smith, the company member who brought the rusty patch bee to life, says she likes the challenge of upcycling materials.

“It makes me think about how much we throw away and how we utilize resources. Using it is a restriction, but I think that makes us more creative,” says Smith.

Initial discussions about the Iowa Insect Pageant started a year ago when Petefish-Schrag approached O’Neal. The entomologist says he didn't need much convincing 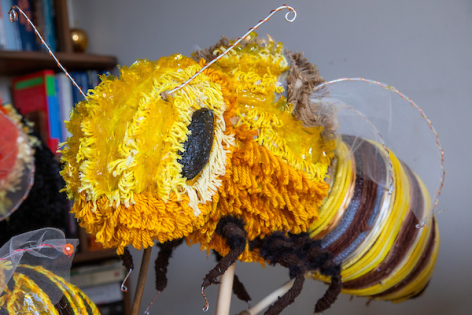 to collaborate on the project. He had seen some of Petefish-Schrag's previous theater productions and puppets and was thrilled for the opportunity to contribute.

O’Neal visited several of Petefish-Schrag's classes early in the process to help the students learn more about the insects they would highlight through puppetry and a script with unique facts about each specimen.

“We reviewed the basic taxonomy of insects – what morphological features make an insect an insect. But we also talked about other ways to classify insects, based on where they live, what they eat, how they reproduce, and how they survive the winter,” says O’Neal, adding he also brought in other entomologists and pinned specimens for the students to draw inspiration.

Alex Brown, ISU student and puppet captain for the pageant, says he appreciated learning about the “billion bug highway” used by insects migrating to warmer weather and the iterative script writing process.

“At the beginning, we were given a sheet of facts about the insect we were talking about in that section; we would then work together by splitting into groups and improvising our way of telling the facts. From there we would sit and talk about what worked well, and then once a written part of the script was handed to us, we started to cement those ideas,” says Brown. 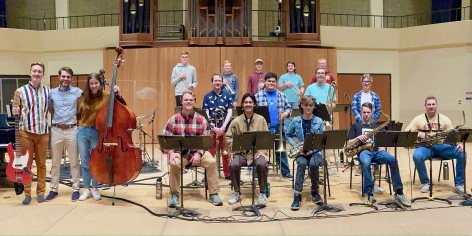 Last fall semester, Giles began composing original music for the project based on conversations with O’Neal about particular insects and their life cycles.

“Everything I learned from Matt – and then swished around in my head for a little bit – helped narrow the compositional focus. For example, the melody call and response heard in the song ‘She’ll Be So Proud’ uses the syllabic rhythms of both the common name and species name of three different types of bees,” says Giles.

He says he also wrote the music in a way to play up the strengths of the 17 student musicians in ISU jazzONE, the university’s top big band.

Near the end of the rehearsal, the stage manager plays a recording of “The Mixtape Effect,” which Giles wrote to tell the story of the Monarch butterfly’s 3,000-mile migration. Two puppeteers expand the accordion-like body of a yellow-, white- and black-striped caterpillar as it eats a milkweed leaf. After the caterpillar is wrapped in a green cloth and carried off stage, three new puppeteers enter, slowly lifting and dipping a giant butterfly through the air.

The performance is a welcome celebration after a long winter and a reminder to marvel in the insect life that will become more active with each day of spring.

The Iowa Insect Pageant is a unique collaboration between the arts and sciences at ISU with original music, giant puppets and a performance aimed at bringing attention to the fascinating and complex world of insects.

April 30, 2 pm – Ames Bandshell Park, live performance from ISU jazzONE. The public is invited to learn about the project and make a small insect puppet at the Ames Public Library at 10:30 am.

“Puppets without a puppeteer are just objects. They are essentially 'dead' until a puppeteer expresses something through that object, giving it life."