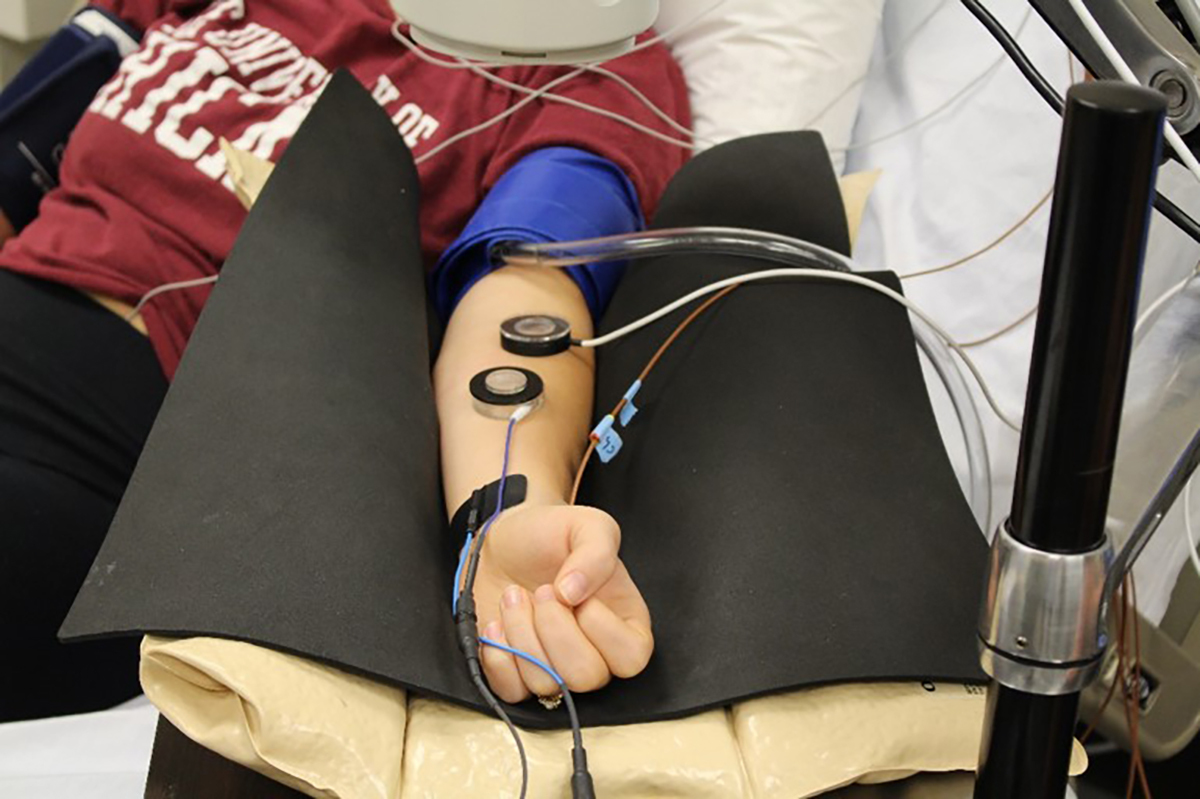 AMES, IA – The majority of heart attacks and strokes in the world are ischemic, meaning a clot or buildup of plaque in an artery prevents oxygen-rich blood from reaching cells in the heart or brain. Blocked for too long, tissues die.

James Lang, an assistant professor of kinesiology at Iowa State University, consolidated the findings from nearly 100 studies – some of them his own – in a review paper recently published in the Journal of Physiology. He explained “remote ischemic preconditioning” (RIPC) generally involves five minutes of elevated pressure on an individual’s arm followed by five minutes of rest, repeated three to four times.

While multiple studies have shown a single session of RIPC creates a protective window that peaks 48 hours later, experiments out of Lang’s lab and repeated by others suggest preconditioning several days in a row can amplify the protection and support other health benefits.

“I think there are a lot of possible applications and potential with RIPC: someone preparing for an upcoming surgery; people who have already had a heart attack or stroke, which puts them at higher risk of it happening again; people who can’t exercise, are pre-hypertensive or have sleep apnea,” said Lang.

Even astronauts may be able to benefit from RIPC. They often often exercise up to two hours a day to ward off cardiac and muscular atrophy due to microgravity in space, explained Lang. Incorporating sessions with a blood pressure cuff could be an effective supplement to their workouts.

But Lang emphasized much more research is needed to make sure RIPC is effective in different settings and for different subsets of the population. Most of what’s known about the underlying mechanisms and duration of protective effects are inferred from animal models from the 1980s and 1990s.

“Unfortunately, a lot of researchers jumped quickly to large clinical studies in the early 2000s, and their results were inconsistent due to a host of outside influences like the participants' medications, physical and genetic factors, age and sex,” said Lang, adding a follow-up study from other researchers found propofol, a common form of anesthesia used in surgeries, suppresses the effects of RIPC, as well.

Since then, researchers like Lang have been working to fill the gap between animal research and big clinical trials.

“In the lab, we can do more controlled studies with human participants, try to figure out what factors influence RIPC and when the best time is to administer RIPC.”

In one study, Lang and his research team found a week of RIPC increased participants’ micro-circulatory capacity by as much as 50%. In another, they measured a modest blood pressure drop and a less active “fight or flight” response while the participants were resting.

“Together, it was improving the participants' blood vessels and potentially reducing the workload of the heart.”

One of the ways Lang tests the effect of RIPC is by measuring how well a study participant’s blood vessels dilate when their skin is warm. Before and after RIPC, Lang attaches a small, nickel-sized device to a participant’s arm. A tiny heater warms up the skin while a doppler bounces a laser light into the micro-vessels below.

Like a weather radar picking up changes in the atmosphere, the doppler Lang uses in his lab measures changes in the flow of red blood cells as the participant’s blood vessel widens in response to the heat.

Lang explained a loss of blood vessel elasticity (i.e., the extent to which arteries can constrict or dilate) increases the risk of high blood pressure, heart attacks and strokes, as well as dementia.

Currently, Lang is working with a researcher at Des Moines University to study how RIPC could help people with diabetes struggling with slow-healing wounds. High blood glucose levels can damage small blood vessels and nerves, and coat arteries with plaque, making it harder to get white blood cells and nutrients to cuts and sores.

While the side effects from RIPC are very low, Lang says anyone interested in trying it on their own, outside a research study, should talk to their physician first.

A growing number of studies indicate short, repeated bouts of reduced circulation with a blood pressure cuff may help reduce tissue damage and prevent the worst outcomes of heart attacks and strokes.

“I think there are a lot of possible applications and potential with RIPC: someone preparing for an upcoming surgery; people who have already had a heart attack or stroke, which puts them at higher risk of it happening again; people who can’t exercise, are pre-hypertensive or have sleep apnea.”