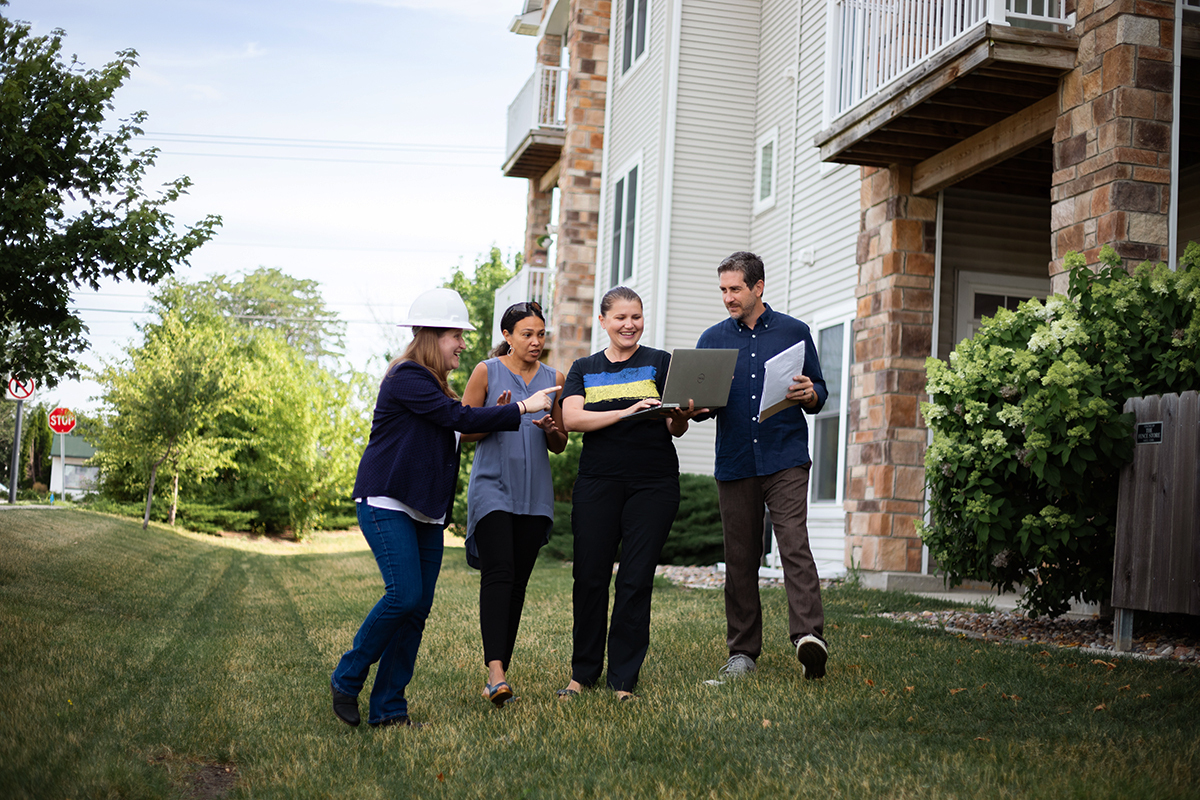 AMES, Iowa – Cristina Poleacovschi grew up in the Republic of Moldova, a landlocked country of about 2.5 million people tucked between Ukraine and Romania. Moldova’s capital city, Chişinău, is about 100 miles northwest of Odessa, Ukraine, and the Black Sea.

“My aunt and cousins live in Karkhiv, Ukraine,” Poleacovschi said. “They, and many others, have been sheltering in basements and bomb shelters for months with very limited resources.”

Ukrainians are also leaving the country to escape Russia’s invasion. Since Russian soldiers entered the country in late February, more than 6.6 million Ukrainians have crossed European borders, according to the United Nations High Commissioner for Refugees. In March, the White House announced the United States would accept up to 100,000 of the refugees, especially Ukrainians who already have family members in the U.S.

The situation sparked some thinking by Poleacovschi – an Iowa State University assistant professor of civil, construction and environmental engineering – and three Iowa State colleagues. How could they help the refugees, especially those who make their way to the American Midwest?

It turns out they’re well equipped to help.

Poleacovschi has worked with Nell Gabiam, an anthropologist, and Scott Feinstein, a political scientist, on various studies of refugee housing, infrastructure, conditions and issues in Greece, France, Switzerland and Germany.

“And now those types of challenges put us in motion to think about the current crisis,” Poleacovschi said.

That thinking led to a proposal to the National Science Foundation’s Civic Innovation Challenge, a “research and action competition” designed to accelerate civic-focused research and technology development into community practice.

The Iowa State researchers will study which factors determine successful integration of Ukrainian refugees into Midwestern communities. Their primary focus will be on improving housing conditions, which could help the refugees build a new foundation for stability and normalcy.

The idea is to develop flexible, decision-making tools that can help refugee services analyze and understand federal funding availability, identify communities with Ukrainian heritage and navigate the various national identities, cultures and political divisions that affect refugees, according to a project summary.

The goal is the “provision and management of housing in ways that best benefit refugees while also adapting to constraints,” the researchers wrote.

Here’s the researchers’ plan to do that:

One tool that could come out of their work is a photo/voice/mapping application that helps refugees make housing decisions and tell their stories. It would display photos of refugee housing, follow trends and include the voices of the refugees themselves.

“That could help decision-makers tap into the refugee experience,” Poleacovschi said.

Another objective is to help decision-makers understand that refugees’ struggles don’t end when there’s a roof over their heads.

“We deal with this as an emergency and therefore temporary,” Gabiam said. “But being a refugee is becoming more normalized. Refugee crises can sometimes last for decades and addressing the needs of refugees requires long-term solutions.”

Iowa State researchers will study which factors determine successful integration of Ukrainian refugees into Midwestern communities. Their work will focus on improving housing conditions for the refugees. The project is supported by a grant from the National Science Foundation's Civic Innovation Challenge.

How did you get involved in refugee studies?

“I got involved primarily because close family members have been refugees and also because my aunt and cousins are currently in Kharkiv experiencing the war.”

“I became interested in the topic of refugees after learning about Palestinian refugees during a course I took as an undergraduate anthropology student on the peoples and cultures of the Middle East. I later became familiar with Palestinian refugee camps in the Middle East (mostly in Syria) while studying, traveling, studying Arabic, and conducting research in the region as a graduate student.”

“Despite the rapidly increasing number of global refugees that are generating swift demographic change, refugee integration is not well understood. Part of the problem is that refugee voices are often marginalized. I find it is personally and academically important to listen to refugee voices and understand how politics impacts their lives and refugees impact society.”

“I was invited onto this research collaboration and have not done work with refugees in the past. However, this topic is dear to me as I am one-fourth Ukrainian. I also took an oath as an engineer, which includes serving humanity. I believe that this includes having a strong commitment to humanitarian standards and that we should consider how our infrastructure, including housing and communities that it cultivates, meets the needs of those in crisis.”

The researchers will also work with: