AMES, IA — Once widespread across the eastern U.S. and Upper Midwest, the number of rusty patched bumble bees has plummeted nearly 90% since the 1990s.

Researchers at Iowa State University are part of a multi-state effort to map out where the federally endangered pollinator lives, identify what habitat it prefers and collect clues about the population’s genetic diversity and overall health. The findings could help wildlife managers and land stewards reverse the bumble bee’s decline and support other pollinators more broadly.

Amy Toth, a professor in the Iowa State Departments of Ecology, Evolution, and Organismal Biology and Plant Pathology, Entomology, and Microbiology at ISU, is leading the 2.5-year project in Iowa with Anna Tucker, an assistant professor in natural resource ecology and management and a unit leader with the U.S. Geological Survey (USGS) Iowa Cooperative Fish and Wildlife Research Unit.

As the researchers collect data on the rusty patched bumble bee, they’re also documenting where they find its larger cousin — the American bumble bee — which has experienced a recent population decline estimated at 51%.

“If we know where surviving rusty patched and American bumble bee populations are located and what they need to thrive, we can better target regions in Iowa and the Upper Midwest for preservation and restoration, as well as future research,” said Toth.

Toth adds that Iowa represents a “key location” for rusty patched bumble bee conservation in the U.S. as the western edge of the pollinator’s range. Isolated, wild populations, like those the team found near Ames and Fort Dodge this summer, may carry genetic variations that could help species recovery efforts.

Using data from the Iowa Department of Natural Resources, U.S. Fish and Wildlife Service and iNaturalist (an app for sharing and identifying plants and animals), the research team identified 50 sites to survey in Iowa. Most were in Iowa’s northeast corner, but they stretched as far west as Spencer and south of Iowa City.

At each site, the team recorded GPS coordinates and planted flags along the circumference of an area roughly the size of a hockey rink. They then walked through the space with hand nets, pausing their 30-minute timer every time they caught a bee.

If they found a rusty patched or American bumble bee, Ibarra-Garibay would return to conduct a second survey. To collect her data, she put each bee on ice to induce a “chill coma.”

“I would have maybe five minutes before they started waking up, so I had to work pretty quickly to collect my measurements.”

After weighing the coma-induced bee, Ibarra-Garibay would slip its wings between graph paper and a microscope slide to measure the size of its head and the space between its wings. She assessed whether it had any wing damage and took photos, which she'll further analyze with software this winter. 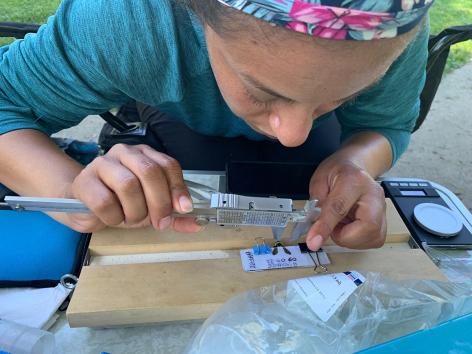 “The idea in our lab is that wing wear equals foraging effort. So, bees may have more wear and tear if they’re flying further to forage or have to increase their foraging effort. It’s the idea that the harder they have to work, the more likely their wings are worn.”

Ibarra-Garibay also collected a small tissue sample for DNA analysis, and pollen from the rusty patched bumble bee’s legs to share with USGS for a larger study investigating the species’ genetic diversity and dietary preferences.

At sites where the team found rusty patched or American bumble bees, Shepherd and Holthaus also conducted habitat assessments (i.e., whether the site was within 20 meters of a body of a water; what plants were flowering) and will work with Tucker on a landscape analysis using Geographic Information System (GIS) mapping.

Out of the 50 sites surveyed twice this summer, the research team detected the American bumble bee at one-third. They found the rusty patched bumble bee at four locations.

"In a couple sites, including right here in Ames, rusty patched bumble bees were fairly abundant, suggesting there are survivor populations out there. So, it's not too late for conservation action here in Iowa,” said Toth.

The other three sites included Brushy Creek State Recreation Area near Fort Dodge, and two locations near Dubuque and Yellow River State Forest, one of which is part of the USFWS Partners for Wildlife Program.

“Most of our detections this summer were along the Des Moines and Mississippi River corridors — riparian zones where there’s a river, then trees and a prairie, but there’s still a lot we don’t know about rusty patched bumble bees in Iowa,” says Shepherd.

More than a bee 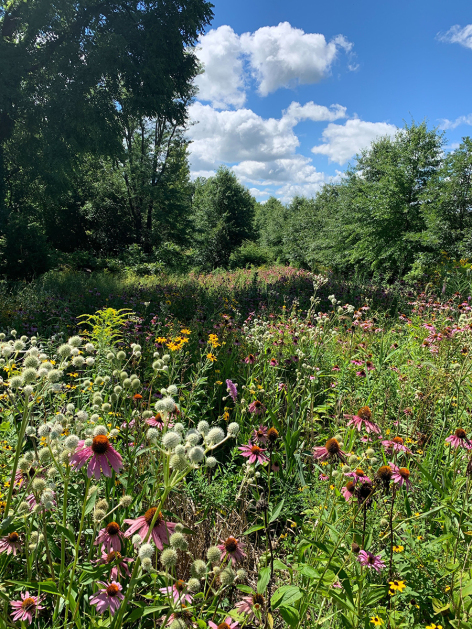 “Some people may ask, ‘Who cares? It's just one little bee species.’ However, both the rusty and the American are large, charismatic species that serve as emblems of a much larger problem — that is, the massive global decline of pollinators,” said Toth.

Efforts to help the rusty and the American recover can benefit other pollinators that rely on the same habitat and face similar threats, like pesticides and climate change.

“Conservation of pollinator populations broadly is important because we humans depend on them for pollination services, because they play important roles in natural ecosystems, and in my opinion, because they are intrinsically fascinating and beautiful animals,” said Toth.

The researchers emphasize the project, which is funded by the U.S. Fish and Wildlife Service, is still in its early stage. This winter, they’ll analyze the data and collect a second round of data next summer.

Researchers at Iowa State University are part of a multi-state effort to map out where the federally endangered rusty patched bumble bee lives, identify what habitat it prefers and collect clues about the population’s genetic diversity and overall health.

The findings, along with data about the threatened American bumble bee, could help wildlife managers and land stewards reverse their decline and support other pollinators more broadly. 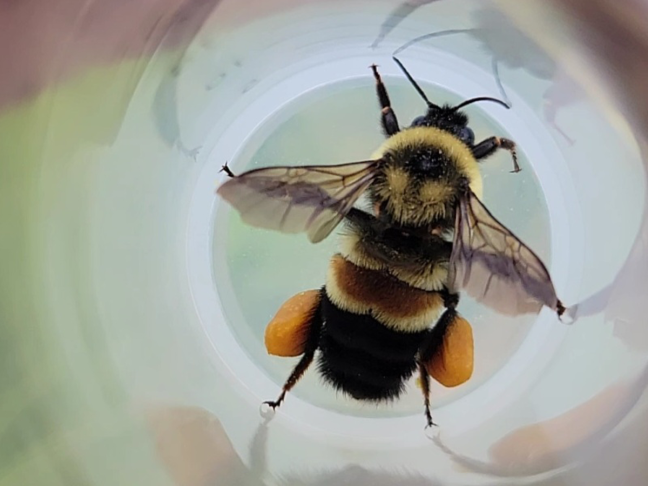 The rusty patched bumble bee (Bombus affinis) has a rusty-colored patch of hair on its abdomen, black head and yellow thorax with a black pattern that resembles a thumb tack. Photo courtesy of Erika Ibarra-Garibay. 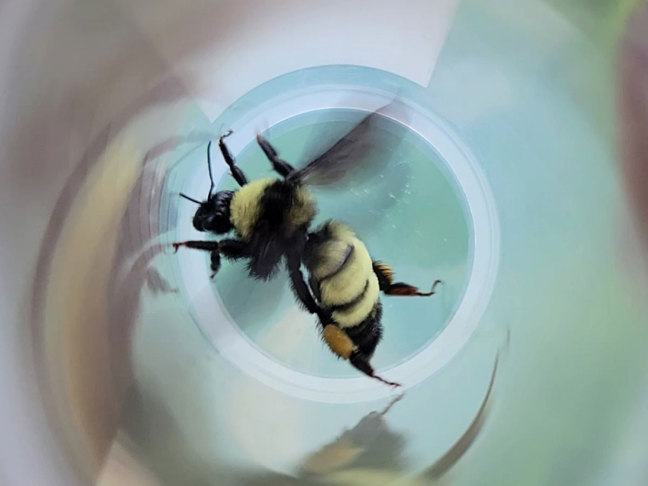 The American bumble bee (Bombus pensylvanicus) is very large (0.6 to 1 inch long). It has a black head, thick black band on a yellow thorax and yellow bands on the abdomen. Photo courtesy of Erika Ibarra-Garibay.

"In a couple sites, including right here in Ames, rusty patched bumble bees were fairly abundant, suggesting there are survivor populations out there. So, it's not too late for conservation action here in Iowa."

"I would have maybe five minutes before they started waking up, so I had to work pretty quickly to collect my measurements."