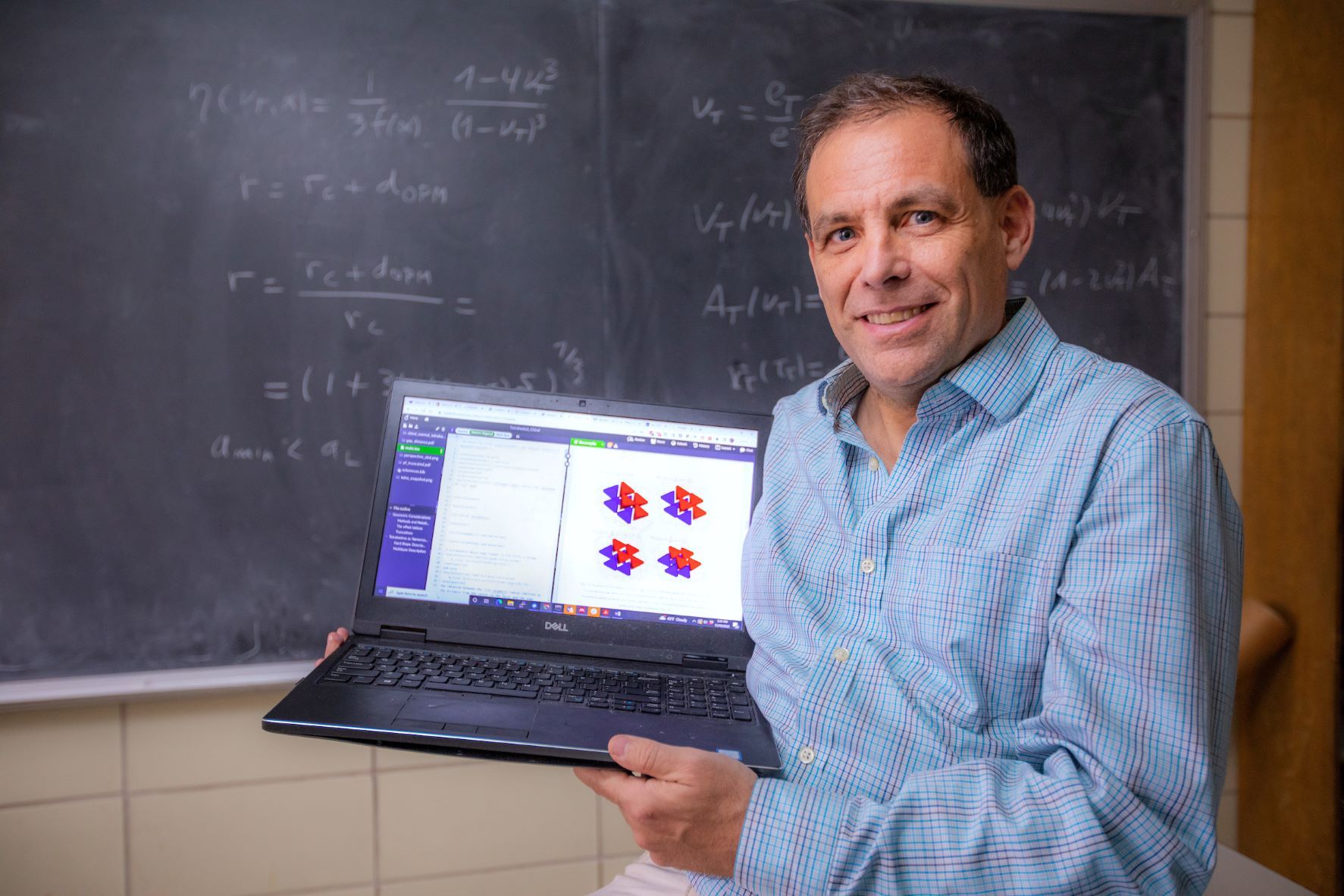 No, his theoretical work explaining what’s happening inside those new nanomaterials is all about computer models, equations and figures. And so, when he joins a project, the Iowa State University professor of physics and astronomy who’s also affiliated with the U.S. Department of Energy’s Ames National Laboratory might contribute many dense pages showing how nanoparticles assemble.

Case in point: Travesset’s “Chiral Tetrahedra” calculations and illustrations that are part of a research paper just published by the journal Nature. Those calculations show how controlled evaporation of a solution containing tetrahedron-shaped gold nanoparticles on a solid silicon substrate can assemble into a pinwheel-shaped, two-layered structure.

It turns out the nanostructure is chiral, meaning it’s not identical to its mirror image. (The classic example is a hand and its reflection. The thumbs end up on opposite sides and so one hand can’t be superimposed on the other. That’s chirality.)

Travesset said producing a stable nanostructure with chiral properties is a big deal.

Travesset, who was introduced to the project’s lead researchers from the University of Illinois Urbana-Champaign (see sidebar) during a virtual scientific conference, wasn’t even sure this new chiral structure could exist in the real world.

“This was a very open structure,” he said. “Usually, with nanoparticles, these structures are never stable.”

But this one was “held together by different types of electrostatic forces,” Travesset said. “They were unusual in their continuity.”

The structure’s chirality was made possible by being sandwiched in two different substrates – air at the top and a solid surface at the bottom. Optical measurements at the University of Michigan corroborated the chirality by reporting a very strong chiro-optical effect in response to polarized light.

“This very open structure with chiral optical response was very important,” Travesset said. “People have been trying to do this for a long time. But the structure has always been unstable or not realizable. This is the first example of this having been achieved.”

“As a theorist working in all things nanoparticle, I have always been interested in how to assemble nanoparticle arrangements that are chiral,” Travesset said.

The “unique topology and physics” of these chiral nanostructures, “make their self-assembly from nanoparticles highly sought after yet challenging,” according to the Nature paper.

Travesset said the experimentalists in the research group will build on their discovery, learning more about the nanostructure’s properties and, potentially, how they could be used in, say, coatings for optical applications.

For nanoparticle theorists working with their models, equations and figures, Travesset said there’s also a lot of work ahead.

“Despite some successes, theory is somehow lagging behind,” he said. “We are not yet in a position where we can design nanoparticle-based materials from theoretical/computational models alone. In fact, other colleagues and I are organizing an eight-week workshop to address this challenge.” (See sidebar.)

Researchers have built a unique, long-sought structure from gold nanoparticles. Alex Travesset of Iowa State and the Ames National Laboratory has the equations and illustrations to explain how it all happened. This new nanomaterial could have useful optical, mechanical and electronic characteristics.

“Despite some successes, theory is somehow lagging behind. We are not yet in a position where we can design nanoparticle-based materials from theoretical/computational models alone. In fact, other colleagues and I are organizing an eight-week workshop to address this challenge.”

“Nanoparticle Assemblies: A New Form of Matter with Classical Structure and Quantum Function,” March 27 to May 19, 2023, the Kavli Institute for Theoretical Physics, UC Santa Barbara