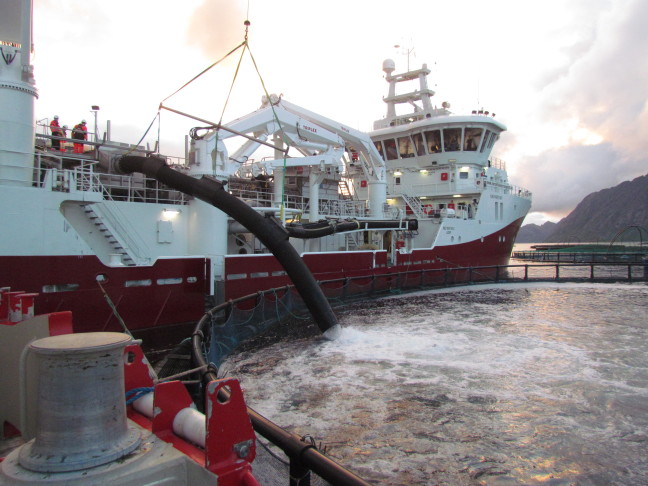 AMES, Iowa – Fish farming is a crucial industry in Norway, and salmon is by far the most important species. So it’s alarming that bacterial diseases are on the rise at the massive sea farms where salmon are raised.

To help explain why, the country’s top veterinary research center is turning to Mark Lyte, a professor of veterinary microbiology and preventive medicine and the W. Eugene Lloyd Chair in Toxicology at Iowa State University. His theory? The salmon are stressed out.

Norwegian salmon farmers once heavily used antibiotics and other medicines. But their disease control efforts now rely largely on vaccines and physically delousing the fish, a handling practice that has become more common in recent years as sea lice – a crustacean salmon parasite – have become resistant to chemical treatments. Physical delousing methods include brushing lice off the scales of salmon and exposing the cold-water fish to warm water.

“All of that is surely very stressful to the fish. Imagine if you were parboiled for a while. You wouldn't like it. And then we ask, ‘What is part of the stress response?’ Neurochemicals,” Lyte said.

Those neurochemicals – “fight or flight” stress hormones such as norepinephrine and epinephrine – prompt physical reactions such as an increased heart rate and blood sugar levels, preparing an animal to act. But that stimulation can extend beyond the stressed animal.

Lyte pioneered microbial endocrinology, a research field that combines microbiology and neurobiology to study the interactions between microorganisms, animals and plants – many of which produce and respond to the same neurochemicals. One of his discoveries revealed how hormones produced by a stressful condition could lead to deadly infections by acting as an environmental signal to bacteria, causing them to proliferate and attach to host tissue long before the host’s immune system realizes they are there. Recognizing and responding to a host’s stress response enables pathogens to evade immune systems and ultimately cause disease.

That’s what Lyte and researchers from the Norwegian Veterinary Institute (NVI) suspect may be happening at Norway’s salmon farms. Stress hormones produced by the fish could be promoting bacterial growth, leading to increased infections.

A signal to grow

Lyte first showed more than 30 years ago that bacteria can respond to neurochemicals involved in the stress response. Knowing that stress hormones can turbocharge bacterial growth was instrumental in finally understanding why hospital patients who receive synthetic forms of stress hormones to boost their heart and kidney function can develop life-threatening infections.

“Two animals fight and bite each other. The skin of one animal is punctured, allowing bacteria get in. At that point, why would it be in the best interest for the stressed animal with the puncture to have its immune system suppressed and not fight off the bacteria in the wound? Obviously, evolution would not have selected for that to happen,” he said. “Instead, the animal’s immune system would gear up to fight off potential invaders. So stress may be good for the immune response, initially, when an animal is faced with a challenge.”

The trouble is bacteria also want to survive. That’s why infections can ramp up even in the face of a heightened immune response. The bacteria sense the stress hormones as an environmental signal to start growing faster and adhering to surfaces to make biofilms, which enable the bacteria to fend off attacks from immune cells and antibiotics given to treat the infection.

“Dealing with the stress response is nothing new to these bugs. They've seen these neurochemicals before fish and other animals ever existed, and they change their physiology to survive,” Lyte said.

Research into how microorganisms interact and impact host animals is rapidly expanding, but much remains unknown. For instance, Lyte said, scientists discovered in the 1940s that a probiotic common in yogurt, lactobacillus, produces large amounts of gamma-aminobutyric acid, which is a major neurotransmitter in animal brains.

“Decades later, it’s still unclear why,” he said. “It’s not just for the heck of it. They're doing it for a reason.”

Lyte’s research team is partnering with the NVI on a three-year, $1.2 million grant from the Research Council of Norway, the first collaboration between the two institutions. The researchers hope to establish whether stress hormones are making farmed salmon more susceptible to bacterial disease, which costs the industry an estimated $100 million per year.

The outbreaks involve numerous pathogens, both reemerging and new concerns, but there’s no indication of any decisive genetic changes in the bacteria or the fish, which are bred for disease resistance. The environment in the sea cages, including the water temperature, has remained steady. However, the spike in disease rates in recent years coincides with the steep rise in physical delousing, and symptoms often appear shortly after the treatments, which can be conducted as frequently as every month during the summer, said Dr. Snorre Gulla, a senior researcher at NVI.

Starting in July, Lyte will travel to Norway to meet and train Norwegian researchers, who will later visit his lab in Ames. The research will involve exposing fish-associated bacteria to stress hormones in a lab and to stressed fish in water. The team also aims to develop tools for monitoring stress hormone levels in salmon stocks.

Connecting the salmon disease outbreak to stress hormones also would be another step in Lyte’s efforts to show the infectious interaction in a variety of animal species.

“If you can prove this across an evolutionary spectrum, you have a better understanding of how it works in humans,” he said.

An Iowa State University professor who pioneered the study of how stress hormones can directly stimulate pathogen growth will work with Norwegian researchers over the next three years to see if intensive handling methods are making farmed salmon more susceptible to bacterial diseases.

“Dealing with the stress response is nothing new to these bugs. They've seen these neurochemicals before fish and other animals ever existed, and they change their physiology to survive.”