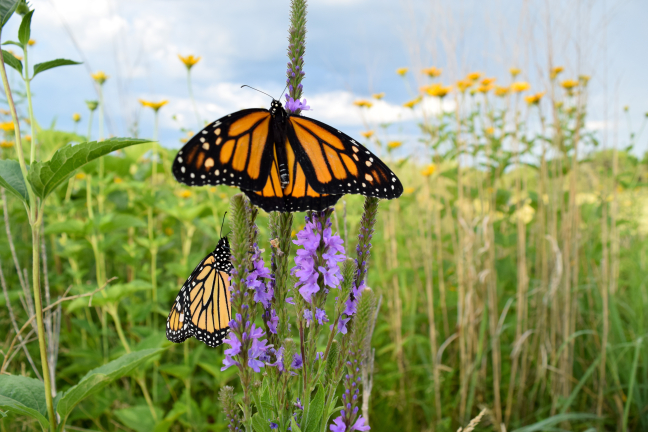 AMES, Iowa – When the Iowa Monarch Conservation Consortium was formed seven years ago, Iowa State University researchers faced two big questions about reestablishing the milkweed and other wildflowers needed for the iconic butterfly’s survival: How can habitat be restored and where should it be located?

The “how” of restoring habitat is outlined in the consortium’s guidelines for planting prairie. “Where” is the subject of a new peer-reviewed journal article that provides an overview of 20 ISU studies, as well as work by other monarch researchers. The paper, published in BioScience earlier this month, synthesizes years of research that includes field observations, laboratory experiments and simulation modeling. The findings are largely optimistic.

Establishing new habitat at the rates called for in Iowa’s conservation plan would increase the size of the monarch population by 10-25% per generation, depending on differing scenarios for pesticide use and the amount and location of habitat creation, researchers found.

“Basically, we’ve concluded that planting habitat anywhere you can in the agricultural landscapes of the Upper Midwest will support growth of the monarch’s breeding generations, even if some of that habitat is near crop fields treated with insecticides,” said Steven Bradbury, professor of natural resource ecology and management at Iowa State.

The higher range of estimated population growth assumes the use of integrated pest management practices and applying insecticides only when pests are likely to cause economically significant crop damage, Bradbury said.

Establishing habitat next to crop fields where insecticides are used is expected to produce more monarchs than if prairie restoration is limited to locations set away from fields. A 100-125 feet buffer between treated fields and habitat patches would eliminate swaths of conservable land, Bradbury said – up to 80% of the non-crop land available in Story County, for instance. Forgoing that much space would make it difficult to add the 1.3-1.6 billion new milkweed stems needed in the Upper Midwest to support a sustainable monarch population.

Insecticide spray drift from treated crops can pose risks to monarch caterpillars, which live exclusively on milkweed plants. However, the impact on the overall population is mitigated because females are highly mobile within their summer breeding grounds, Bradbury said.

“The females move around the landscape a lot. They don’t put all their eggs in one basket,” he said.

While some portion of monarchs downwind from treated fields might have high rates of mortality, other eggs are laid in habitat patches that aren’t exposed to insecticides, Bradbury said. And the milkweed plants near treated fields can still support the next generation of adults.

Using radio transmitters to track female monarchs gave researchers better insight into their nonmigratory flight patterns. Monarchs ride wind currents to travel up to dozens of miles a day when migrating to and from the mountainous oyamel fir forests in Mexico, where they spend the winter. But breeding females also fly between patches of habitat when not migrating, in flights that can exceed a mile, researchers found.

“They’re not migrating when they take these large flight steps, but they seem to turn on a behavior like migration,” Bradbury said. “The general notion was breeding females were moving around a lot to lay their eggs, but there hadn’t been any empirical studies that quantified their non-migratory movement patterns.”

That mobility is part of the reason modeling shows that monarch numbers will still increase if added habitat is fragmented. However, research suggests new plots of habitat of at least 6.2 acres that are situated closely, within 160 to 330 feet of each other, would offer maximal support.

Research and outreach are ongoing for the consortium, a diverse partnership of more than 45 organizations that includes Iowa State, the Iowa Department of Agriculture and Land Stewardship, the Iowa Department of Natural Resources, federal agencies, agriculture and conservation associations, and agribusiness and utility companies. But now is a good time to summarize the group’s research because it’s reached a natural point to pull the best available information together, Bradbury said.

“Sometimes in a novel there is a series of chapters that comprise part 1. Our analogy is that we’ve reached the end of part 1,” he said.

There’s also a practical consideration, he said. The U.S. Fish and Wildlife Service will reconsider in 2024 if the monarch should be protected under the Endangered Species Act, and fact-finding for the decision likely will begin in 2023. It’s an ideal time to share an overview of new monarch research.

Tasks ahead for researchers include collecting additional field data on egg-laying patterns and integrating ISU’s regional modeling with continental-level models to predict how habitat reestablished in the Upper Midwest will impact the size of the overwintering population in Mexico.

Research methods used by the Iowa State team also could be replicated in other areas where breeding monarchs reside in the summer. Though about half of the population that migrates to Mexico come from the Upper Midwest, monarchs’ other breeding destinations, such as New England and southern Ontario, have different climates and landscapes.

The interdisciplinary and multilayered research doesn’t just benefit monarchs. It has offered numerous opportunities for undergraduate and graduate students to work on projects with a wide variety of stakeholders, Bradbury said.

“That’s a strength for a researcher. Working with landowners can help refine research questions and ensure results that help advance useful conservation practices,” he said.

The collaborative nature of the consortium also serves as a blueprint for the co-existence of conservation and agricultural production in Iowa, Bradbury said.

“Conserving the monarch is common ground that brings people together, and those are relationships we can use in addressing other challenges we face,” he said.

A newly published overview of Iowa State University research on the monarch butterfly synthesizes years of study that includes field observations, laboratory experiments and simulation modeling. The findings estimate that the state’s monarch conservation plan will increase the size of the monarch population by 10-25% per generation.

“Basically, we’ve concluded that planting habitat anywhere you can in the agricultural landscapes of the Upper Midwest will support growth of the monarch’s breeding generations, even if some of that habitat is near crop field treated with insecticides.”

Interested in contributing to efforts to support monarchs and other pollinators by establishing a plot of prairie? Every bit helps. See the Iowa Monarch Conservation Consortium’s habitat how-to webpage for tips on how to get started.