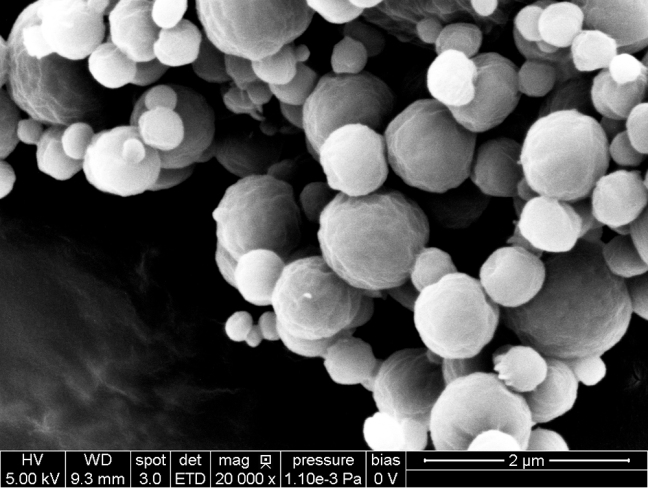 Researchers studying potential treatments for pancreatic cancer are working with polymer nanoparticles similar to those shown here. The nanoparticles are tiny, averaging just 300 billionths of a meter in diameter. Larger image. Scanning electron microscope image courtesy of the Nanovaccine Institute.

AMES, Iowa – While out mowing his carefully kept lawn during the summer and fall of 2012, a 75-year-old retiree noticed his lower back and side didn’t feel quite right. But it didn’t seem like the normal muscle tweak and spasms.

So, when he went in for his annual physical that fall, he mentioned the discomfort to his doctor, who ran some tests and made some referrals.

It turned out to be stage 4 pancreatic cancer, already spread to the liver.

The family of the former high school teacher and baseball coach quickly learned there really weren’t any home-run treatments after the disease has spread. In this case – with limited chemotherapy treatments – death came six months after diagnosis.

Unfortunately, that’s not an unusual story for pancreatic cancer.

The National Cancer Institute reports the five-year survival rate for the disease is 8.5 percent. There are no screening tests or early warning signs. So the cancer may have already spread when it’s eventually detected. And when the cancer is advanced, surgery, radiation, chemotherapy or a combination of them are rarely effective.

They’re working together to combine strategies, technologies and expertise to develop nanovaccine platforms to combat pancreatic cancer. Their idea is to load fragments of certain proteins associated with pancreatic cancer into nanoparticles that can be introduced into the body. The proteins would arm a patient’s immune system and help it target and kill cancer cells.

“This is a very important initiative,” said Aliasger Salem of the University of Iowa’s College of Pharmacy, referring to the work of the Nanovaccine Institute. “This is a collection of scientists who have a passion to improve therapies against infectious diseases and cancers. And this has potential to make a big difference in terms of improving vaccines and their efficacy.”

Researchers from diverse fields are studying nanovaccines for pancreatic

The researchers’ work to study and develop nanovaccines to treat pancreatic cancer is supported by a five-year, $2.67 million grant from the National Cancer Institute of the National Institutes of Health.

The project’s leader is Balaji Narasimhan, an Anson Marston Distinguished Professor in Engineering at Iowa State, the Vlasta Klima Balloun Faculty Chair and the director of the Nanovaccine Institute. Other project principal investigators are Maneesh Jain, associate professor of biochemistry and molecular biology at UNMC's College of Medicine; and Salem, the Lyle and Sharon Bighley Endowed Chair and Professor in Pharmaceutical Sciences and the division head of pharmaceutics and translational therapeutics at Iowa. Project co-investigators are Michael Wannemuehler, professor and chair of veterinary microbiology and preventive medicine in Iowa State’s College of Veterinary Medicine and associate director of the Nanovaccine Institute; Surinder Batra, the Stokes-Shackelford Professor and chair of biochemistry and molecular biology at UNMC; and Joyce Solheim, a professor at the Eppley Institute for Research in Cancer and Allied Diseases at UNMC.

Batra and Jain have expertise in cancer biology; Narasimhan in nanovaccines; Salem in nanoparticles and cancer; Solheim and Wannemuehler in immunology.

“There is a lot of back-and-forth collaborating,” Jain said. “We’re building on each other’s data and expertise. And we’re complementing each other’s expertise in a very nice way.”

That’s what the Nanovaccine Institute is all about – finding seed grants to assemble teams of researchers from multiple disciplines and institutions who work together to launch projects, collect data and make preliminary findings that can lead to major grants and discoveries. Narasimhan has called it a “dream-team” approach to vaccine research.

In this case, the biomaterials and nanoparticles researchers are providing a way for the immunologists and cancer specialists to deliver bigger protein fragments to boost the immune system.

“This collaboration puts us in a stronger position to explore multidisciplinary approaches for addressing challenges in cancer therapy,” Jain said.

Narasimhan said the researchers are working on a three-pronged strategy for using nanovaccines against pancreatic cancer:

First, they’re working with a class of proteins called mucins that are overexpressed in cancer tumors. In the case of pancreatic cancer, the mucin 4 protein (also called MUC4) is overexpressed in 90 percent of tumors, but not in healthy cells.

Batra has worked with mucin proteins for nearly 20 years, with some 75 scientific papers related to MUC4 and pancreatic cancer originating from his research group. He’s been working with the Nanovaccine Institute since it was established in 2013 with seed funding from Iowa State’s Presidential Initiative for Interdisciplinary Research.

“We’ve shown the importance of MUC4 in pancreatic cancer,” Batra said. “We see MUC4 as a good, tumor-specific target for a vaccine.”

Narasimhan said the nanoparticles developed in his lab, which average 300 billionths of a meter in diameter, can be loaded with fragments of MUC4 with room for other protein fragments as well.

The nanovaccines deliver the fragments to lymph nodes where they stimulate the immune system’s T cells to target and attack cells expressing the protein.

Why a nanovaccine for that job?

Second, Narasimhan said the researchers will look for ways to use nanoparticles to deliver molecules that disable the immune checkpoints pancreatic cancer uses to hide from the immune system. That work is related to the development of various immune checkpoint blockades now being used in cancer immunotherapy.

And third, Narasimhan said the researchers will test their nanovaccines in special mouse models that don’t recognize the human MUC4 protein as foreign. Jain called these “clinically relevant models.”

In addition, Wannemuehler said, “This nanovaccine approach employs out-of-the-box concepts to enhance the patient’s immune response toward tumor cells. The group has good evidence from other studies that nanovaccine formulations do and will activate the body’s cell-mediated immunity – the T cells – that will target cancer cells.”

And that could one day lead to powerful treatments.

“A nanovaccine can potentially not only fight off the cancer, but also help in preventing it from recurring again later,” Solheim said. “This is a benefit of a vaccine that other types of cancer treatment don’t have.”

The research project will also test the performance of different kinds of nanoparticles for attacking pancreatic cancer and taking down its checkpoints against the immune system.

“We think this approach could also generate responses in pancreatic cancer,” he said. “We’re hopeful for a better response – better than we’ve seen in the past.”

That could one day mean a better cancer story for the more than 50,000 Americans the National Cancer Institute estimates are diagnosed with pancreatic cancer every year – many with disease that has already advanced and spread, all facing a difficult prognosis.

About the National Institutes of Health (NIH): NIH, the nation's medical research agency, includes 27 Institutes and Centers and is a component of the U.S. Department of Health and Human Services. NIH is the primary federal agency conducting and supporting basic, clinical, and translational medical research, and is investigating the causes, treatments, and cures for both common and rare diseases. For more information about NIH and its programs, visit www.nih.gov.

About the National Cancer Institute (NCI): NCI leads the National Cancer Program and NIH’s efforts to dramatically reduce the prevalence of cancer and improve the lives of cancer patients and their families, through research into prevention and cancer biology, the development of new interventions, and the training and mentoring of new researchers. For more information about cancer, please visit the NCI website at cancer.gov or call NCI’s Contact Center (formerly known as the Cancer Information Service) at 1-800-4-CANCER (1-800-422-6237).

A research team led by Iowa State's Balaji Narasimhan and affiliated with the Nanovcaccine Institute based at Iowa State is studying nanovaccines for treating pancreatic cancer. There are no screening tests or early warning signs for the disease and so the cancer has often spread when it is found. When that's the case, current treatments are rarely effective. The researchers say nanovaccines could generate a response in pancreatic cancer. Their study is supported by a $2.67 million grant from the National Cancer Institute of the National Institutes of Health.

“This collaboration puts us in a stronger position to explore multidisciplinary approaches for addressing challenges in cancer therapy.”

“This is a very important initiative. This is a collection of scientists who have a passion to improve therapies against infectious diseases and cancers. And this has potential to make a big difference in terms of improving vaccines and their efficacy.”

Aliasger Salem, the University of Iowa’s College of Pharmacy