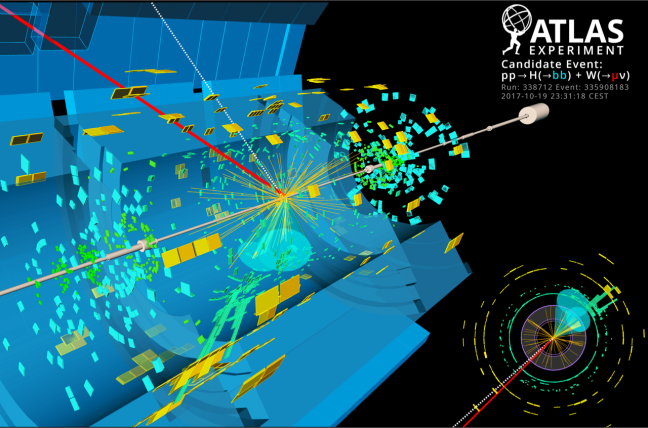 This image from the ATLAS Experiment at the Large Hadron Collider in Europe shows a Higgs boson decaying into a pair of bottom quarks (the blue cones highlighted on the bottom right image). Iowa State physicists have been part of the international team looking for the hard-to-find signal. Larger image. Image courtesy of the ATLAS Collaboration/CERN, the European Organization for Nuclear Research.

AMES, Iowa – There was so much noise all around, particle physicists had a hard time finding the signal they were searching for – it was a little like listening for a whisper across the stadium during a big touchdown play.

But, physicists from around the world – including a small team at Iowa State University – recently announced they had successfully filtered out enough noise from the Large Hadron Collider and observed the Higgs boson decaying into a pair of bottom quarks.

(A quick reminder from high school science: The nucleus of an atom includes protons and neutrons. Those are made up of quarks, which come in six types with various masses and charges. Now some higher-level science: Physicists believe the Higgs is associated with the field that gives elementary particles such as quarks their masses. And the Standard Model of particle physics predicts that 58 percent of Higgs bosons would ultimately decay into a pair of bottom quarks.)

Well, when protons collide at the Large Hadron Collider near Geneva, Switzerland, only a few Higgs bosons are produced. But the collisions create billions of pairs of bottom quarks. And almost all of them have nothing to do with the Higgs.

Iowa State particle physicists – including faculty members Chunhui Chen, Jim Cochran, and Soeren Prell; postdoctoral research associate Bo Liu; and doctoral student Carlos Vergel Infante, who’s now based at the European Organization for Nuclear Research, the home of the Large Hadron Collider – have been working as part of the collider’s ATLAS Experiment to find ways to sift and sort all the data about bottom quarks.

“We’re using machine learning to extract a very, very small signal from a huge amount of data,” said Chen, an associate professor of physics and astronomy.

The powerful technology has helped physicists collect enough data and clear enough statistical hurdles to claim a direct observation of the Higgs decaying into two bottom quarks. A paper describing the observation is now posted on the arXiv.org website.

While the observation was predicted by theorists, finding it in their experiments is still a major achievement for physicists.

First, Chen said, it’s significant that physicists were able to develop technologies to help them find the bottom quarks associated with the Higgs: “It’s a big advancement to see such a tiny signal.”

Those kinds of technological advancements in particle physics sometimes lead to consumer, medical or other applications that affect our daily lives.

And second, the observation gives physicists a better understanding of the Higgs boson and its properties. The Higgs has made a lot of headlines, but measuring it is still fairly new to particle physics. Physicists first announced their particle detectors had discovered and measured the Higgs in 2012.

“This is really the beginning,” Chen said. “Now that we know the Higgs can decay to two bottom quarks we want to confirm the rate of that decay. This precision is important.”

Lurking in all those precise measurements could be clues to new physics discoveries. “For example,” Chen said, “if there is dark matter, where can we look for it?”

Dark matter is a physics mystery that’s never been directly observed. It could account for unseen mass and gravitational power in the universe. That, in turn, could help explain why galaxies hold together and how our universe formed.

In the years ahead, measurements at the Large Hadron Collider will get even more precise. The collider will be shut down at the end of this year for two years of maintenance and upgrades. Even bigger upgrades are scheduled to go online in 2026.

Iowa State physicists have been working like engineers to design and fabricate prototype parts to improve the innermost layer of the ATLAS detector, a machine that’s 7,000 tons, 151 feet long and 82 feet across. The detector is essentially a gigantic, multi-layered, super-fast digital camera that records subatomic particles flying from collisions of protons or lead ions.

Soeren Prell, a professor of physics and astronomy, pulled a prototype part from the lab. It’s a support structure – it looks like a long, thin plank about four feet long – that will hold sensors, electronics and a cooling system. The plank itself is made of a lightweight carbon fiber honeycomb and the cooling pipes are titanium. The cost of each plank with sensors and electronics installed could be more than $100,000 – and 500 of them will be built.

The Iowa State physicists are working on the planks with teams at Yale University and in the United Kingdom. They’re currently in the research-and-development phase of the project but will move to pre-production next year.

Prell said the Iowa State team’s primary task is developing quality-control techniques for the project. That’s because once the planks are installed, if there’s a failure, it takes four months to open the detector for repairs.

All those improvements will mean even more information for physicists around the world to manage and analyze: “About seven years from today, we’ll have a new detector and accelerator,” Prell said. “And we plan to collect about 20 times the data we have now.” 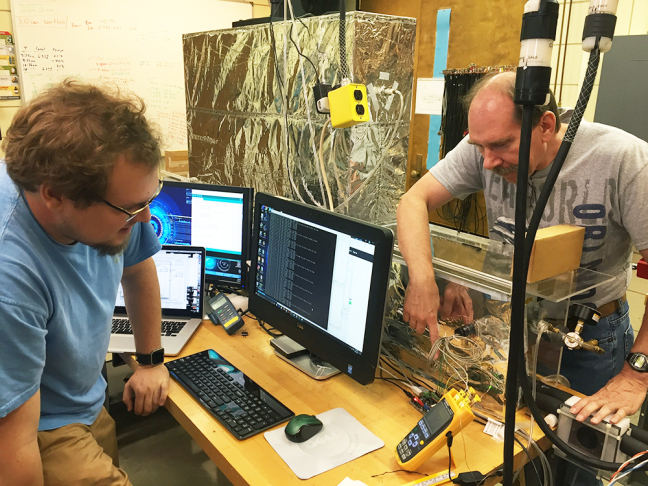 Iowa State physicists are researching and developing new support structures -- "planks" -- that will be part of future upgrades to the ATLAS detector at the Large Hadron Collider. Here, left to right, William Heidorn, a graduate student, and Roy McKay, an assistant scientist, take thermal images of a prototype plank. Larger photo. Photo courtesy of Soeren Prell.

Iowa State physicists contributed to the international collaboration that found a way to sift and sort data from the Large Hadron Collider to observe the Higgs boson decaying into a pair of bottom quarks. The observation gives physicists a better understanding of the Higgs boson and could lead to clues for new physics discoveries.

“About seven years from today, we’ll have a new detector and accelerator. And we plan to collect about 20 times the data we have now.”