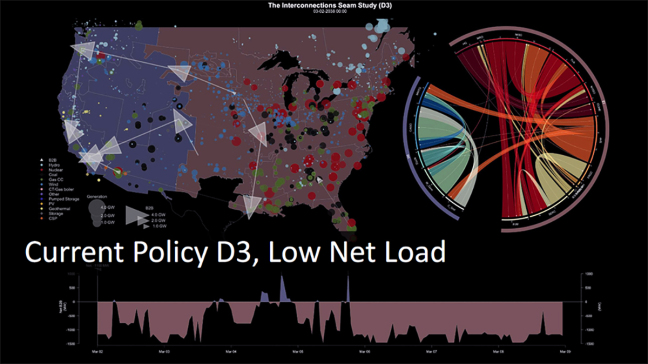 AMES, Iowa – As the sun drops on another busy day in America, arrows on a map of the country point west, indicating electricity – including Midwestern wind power – is flowing from the eastern power grid to the western.

As the sun heats up the next day, some of those arrows flip to the east, indicating electricity – including Southwestern solar power – is flowing from the western grid to the eastern.

It’s a visualization tool prepared by the National Renewable Energy Laboratory (NREL). It shows what could happen – based on extensive computer modeling – if a “macrogrid” of major transmission lines looped around the Midwest and West and connected the country’s two major power grids, the Eastern Interconnection and the Western Interconnection. (There’s also a smaller, Texas-based grid.)

“It’s a tool for helping us understand what it means to coordinate with your neighbors,” said Aaron Bloom, speaking at the “TransGrid-X 2030” symposium in Ames last July that explored the costs and benefits of connecting the two grids. “What does it mean to trade with your neighbors?”

Right now, that tool is answering a hypothetical question – it’s impossible for the East and West to swap much electricity, including renewable energy. There’s no way for much of the wind energy from the prairie states to go west, or the solar energy from the desert states to go east.

That’s because the two grids are split by a seam that generally runs north and south of the Nebraska-Wyoming border. The two grids developed independently over decades and each operates out of sync with the other, making it difficult to directly connect one grid to the other. There are currently seven small lines that link the eastern and western grids. The links use back-to-back systems that convert high voltage alternating current from one grid to high voltage direct current that can cross the seam then back to high voltage alternating current for the other grid.

But, even though that system works, its capacity for transferring electric power across the seam is very small – about 1.5 gigawatts of the country’s installed generation capacity of more than 1,000 gigawatts.

That seam is why a group of researchers – led by Bloom, formerly of NREL in Colorado and now the director of product research and development for NextEra Analytics in St. Paul, Minnesota – has studied ways to connect the country’s two big grids and share as much as 30,000 gigawatts of electricity. 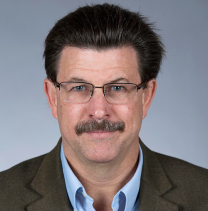 James McCalley – an Iowa State Anson Marston Distinguished Professor in Engineering, the Jack London Chair in Power Systems Engineering in the department of electrical and computer engineering and an associate of the U.S. Department of Energy’s Ames Laboratory – has been part of the effort.

He and his research group contributed by building computer models to simulate 15 years of grid improvements and operations, including grid-to-grid transmission lines. The models took the grid-improvement process up to 2038. NREL researchers used the 2038 data to complete a highly detailed model of a full year of utility operators sharing power across the grid seam.

The two-year, $1.5 million study was part of a $220 million Grid Modernization Initiative announced in January 2016 by the U.S. Department of Energy.

The Energy Systems Integration Group – a non-profit engineering, resources and education association that serves the energy industry – recently awarded McCalley, Bloom and other leaders of the seams study “Excellence Awards” for their contributions to the project.

Adding up the value

McCalley said the study was designed to see if it made economic sense to significantly expand the connection between the eastern and western grids.

“We wanted to see the value of building high-capacity transmission across the grid seams for a high-renewable future of wind and solar energy,” he said.

And the researchers found value: for every $1 spent on the project, there could be $2.50 returned, McCalley said.

After running the models and analyzing the numbers, Bloom said, “The message is very, very clear here: Across all scenarios – and we didn’t expect this when we first started this study – we see large-scale investments and large-scale benefits associated with these futures.”

McCalley said the macrogrid could require an investment of $80 billion, including installation of direct current transmission lines to connect the grids and improvements to the alternating current lines of the conventional, existing grids on both sides of the seam.

One of the beneficiaries of the project would be Iowa and its wind-energy industry – an industry that operates nearly 4,700 wind turbines and produced 34% of the state’s electricity in 2018, according to the U.S. Energy Information Association.

“Iowa would say this is good for Iowa,” McCalley said. “The industry is building wind production in the state, but the transmission is limited. To send wind energy to the coasts, we need a lot more transmission than we have today.”

Just look at the data, said Bloom, the seam study’s leader, during the TransGrid symposium: “The theory that if you build big, cross-country transmission, you’re going to get a lot of energy and capacity sharing – we see that play out.”

Iowa State engineers contributed to a study of the economic value of significantly expanding the connections between the country's eastern and western power grids. Expanding the connections could allow wind power from the Midwest and solar power from the Southwest to move back and forth across the country. The two-year, $1.5 million study was part of a $220 million Grid Modernization Initiative of the U.S. Department of Energy.

“We wanted to see the value of building high-capacity transmission across the grid seams for a high-renewable future of wind and solar energy.”

“What does it mean to trade with your neighbors?”

In addition to Iowa State and the National Renewable Energy Laboratory, the seams study includes researchers from: