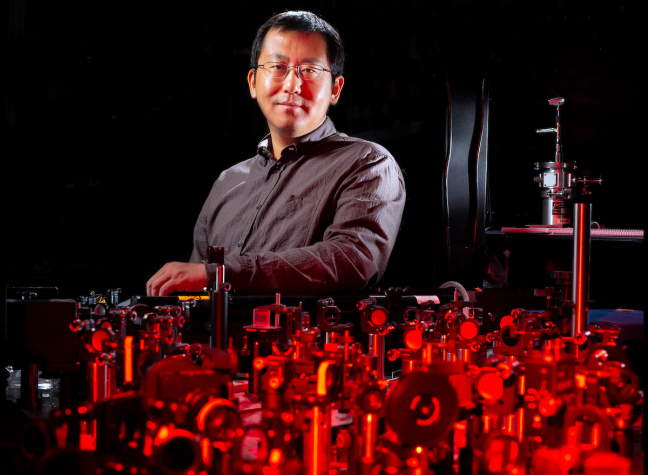 AMES, Iowa – Jigang Wang can break his research goals into just a few words: “To discover and control quantum states of matter.”

But, it takes paragraphs, analogies, illustrations, internet searches and a willingness to decipher talk about “non-equilibrium quantum phase discovery via non-thermal ultrafast quench near quantum critical points” to get a handle on those eight words.

Even though it’s a head-scratcher, Wang’s work could be a big deal to all of us.

Harnessing quantum physics – the particles and energy down at atomic scales – could lead to better computing, sensing, communicating and data storing technologies. But first researchers such as Wang – a professor of physics and astronomy at Iowa State University and a physicist at the U.S. Department of Energy’s Ames Laboratory – need to provide more answers about the quantum world.

In Wang’s case, many of those answers are coming from quantum terahertz spectroscopy that can visualize and steer electrons.

A three-year, $465,000 grant from the U.S. Army Research Office has supported the spectroscopy studies by Wang and his research group. 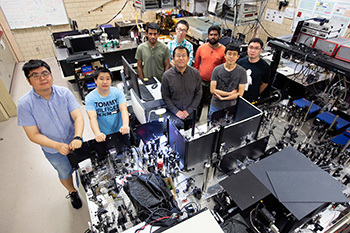 Wang and his team have announced three discoveries based on those studies:

The first, reported in Nature Materials, describes how ultrafast pulses of photons – laser flashes at trillions of cycles per second – can switch on a state of matter hidden by superconductivity, the flow of electricity without resistance, usually at super-cold temperatures. The discovery demonstrates a new tuning knob – called “quantum quench” by the physicists – for non-equilibrium materials discovery such as switching on exotic, hidden states without temperature change.

The second, reported in Physical Review Letters, describes how the terahertz instrumentation can trace electron pairings in materials, revealing a new, light-induced, long-lived state of matter.

And the third, reported in Nature Photonics, describes how the ultrafast flashes of light Wang and his collaborators work with can be used like a knob to control and accelerate supercurrents. The flashes break equilibrium symmetry, thus triggering forbidden quantum oscillations that can’t be achieved by any known means.

“Dr. Wang’s work is revealing new physics and how we can use light to invoke new properties that are otherwise unavailable,” said Marc Ulrich, physics division chief at the Army Research Office, an element of the U.S. Army Combat Capabilities Development Command’s Army Research Laboratory. “Light-induced phases may enable technologies such as optical computing, novel sensors or unforeseen ways to control light or electrons.”

The research in Wang’s lab is mostly unexplored territory in condensed matter physics and materials science, Wang said. And so there’s more work ahead to knock down knowledge barriers to help push development of quantum technologies and their high-speed communication capabilities.

“We’d like to use these tools – these fast flashes and high frequencies – to probe smaller scales, 1 to 10 nanometers (that’s 1 to 10 billionths of a meter),” Wang said. “We’d also like to develop controls using terahertz light for the quantum computation community.”

And how did all of this get started in Wang’s lab? Where did these ideas about quantum discovery and control come from?

“I’ve always been fascinated by the discovery of new states of matter by developing new tools, especially those states that are difficult or even can’t be accessed by conventional means,” Wang said.

That means minimum changing of temperatures, pressures, chemical compositions or magnetic fields to get to these new states of matter that are typically unstable in equilibrium and often hidden by conventional measurement methods but have been stabilized in his experiments, Wang said.

Nor does he focus on accidental discoveries that sometimes happen by just trying something in the lab. Wang wants to develop and apply precise and powerful laboratory tools in a controlled, rational way to find these new states of matter hidden within superconducting and other complex materials.

By doing that, he said he’s learning these intense terahertz flashes produced by his laboratory instruments really can be a control knob for finding, stabilizing, probing and potentially controlling these exotic states and their unique properties.

“We have established a new approach,” he said, “to access and potentially control exotic states of matter.”

Jigang Wang and the members of his research group are developing new tools and techniques to access new states of matter hidden within superconducting and other complex materials. Harnessing these exotic states and their unique properties could lead to better computing, communicating and data storing technologies. Wang's research is supported by the U.S. Army Research Office.

“We have established a new approach to access and potentially control exotic states of matter.”

Jigang Wang of Iowa State and the Ames Laboratory

“Dr. Wang’s work is revealing new physics and how we can use light to invoke new properties that are otherwise unavailable. Light-induced phases may enable technologies such as optical computing, novel sensors or unforeseen ways to control light or electrons.”