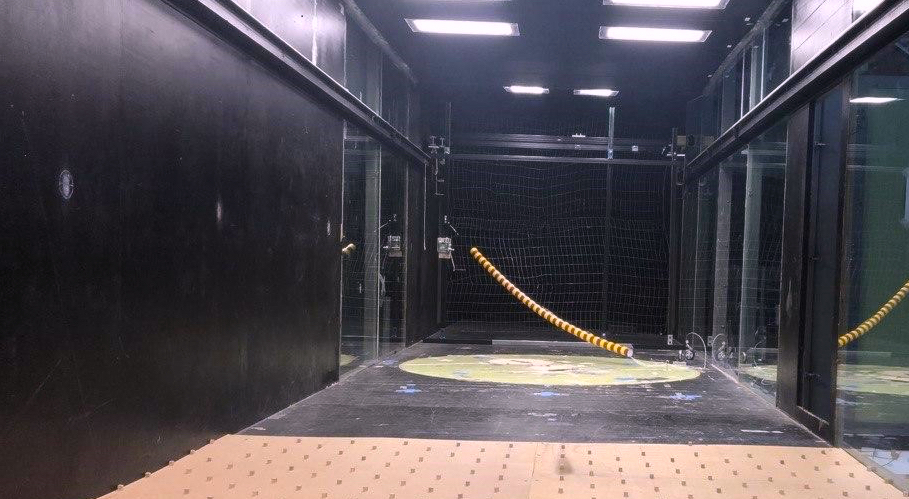 Up ahead, traffic signals hanging from cables also jump and sway in the storm.

Those galloping cables look dangerous. What do you do? Speed away? Find cover? 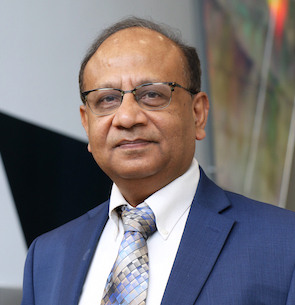 If you’re Partha Sarkar, professor of aerospace engineering at Iowa State University, you head down the hall to the wind tunnels in the department’s Wind Simulation and Testing Laboratory. That’s where Sarkar and his students have been simulating high winds over cable models – some with grooved surfaces, like power lines, and some with smooth surfaces, like bridge and other stay-cables – to understand why cables gallop.

Sarkar has spent the last five years running wind tunnel experiments to collect data on cable vibration in the high winds generated by hurricanes and other windstorms, understand how wind flows around the cables and the physics involved in exciting these cables – all with the purpose of finding an engineering solution to dampen the runaway cables.

The galloping can happen during summer or winter storms, and under dry or icy conditions. Strong winds are all you need to produce the problem.

A summary of one of the five research papers Sarkar and his co-workers have written about the subject – this one published last year in the journal Engineering Structures – describes one of the problems:

“Cables of suspension, cable-stayed and tied-arch bridges, suspended roofs, and power transmission lines are prone to moderate to large-amplitude vibrations in wind because of their low inherent damping. Structural or fatigue failure of a cable, due to these vibrations, pose a significant threat to the safety and serviceability of these structures.”

When it comes to power transmission lines or high-voltage power conductors, the problems caused by vibrating cables are many: “flashover, wire burning, tripping, transmission line tower collapse, accident, interphase short circuit, and structural or fatigue failure of transmission towers or conductors,” says a summary of another paper. “Catastrophic” failure or damage are other terms that show up in summaries of related papers from Sarkar’s lab.

A $338,000 grant from the National Science Foundation has been supporting Sarkar’s efforts to understand and solve these cable problems. The project includes Sarkar analyzing cables under wind excitation based on data from wind-tunnel experiments as well as work by Anupam Sharma, an Iowa State associate professor of aerospace engineering, to build computer simulations of vibrating cables and the underlying fluid dynamics. Their efforts are aided and implemented by Mohammad Jafari, a former graduate student in aerospace engineering who’s now a postdoctoral research associate in civil, construction and environmental engineering who has worked on the experiments; and Xingeng Wu, a graduate student in aerospace engineering who has worked on the computer simulations.

The primary goal of the research is to develop a wind-load model and methodology that can be used as a tool in structural analysis to identify the vulnerability of cable galloping in windstorms and predict their vibrations in different wind conditions.

The researchers have found that everything makes a difference when high winds blow over cables. Are the cables dry or icy? Are they single cables or are they bundled? Are they horizontal (such as power lines) or are they angled (yawed) and inclined (such as stay-cables on cable-stayed bridges)?

“In these different wind situations, and based on our tests, we’re able to predict the critical wind speed that produces galloping at a given yaw angle – the angle between the wind and the normal plane of the cable,” Sarkar said.

Generally, he said, the steeper the yaw angle up to 45 degrees of a dry, inclined cable, the lower wind speed for the onset of galloping.

That ability to predict how a cable will behave in a given situation will help engineers determine how much additional damping is needed and which mechanical or aerodynamic devices can be used to dissipate the energy and motion of a wind-blown cable, thus reducing the likelihood of an out-of-control gallop.

With the wind tunnel and computational studies, “We’ve attacked the problem in different ways,” Sarkar said. “This has given us enough data for the first time to predict the critical wind speed that produces galloping at specific yaw angles of a cable with the wind. That will also tell us when and by how much we need to increase damping of cables.”

All of that data and new understanding, Sarkar said, could one day make it far less likely for cables to dangerously whirl and cables or structures to catastrophically fail in high wind.

Iowa State engineers are doing wind-tunnel tests and computer simulations to understand and predict how the cables that carry power or support bridges will react to high winds. The goal is to prevent them from dangerously whirling in the wind, causing cables or structures to catastrophically fail.

With the wind tunnel and computational studies, “We’ve attacked the problem in different ways. This has given us enough data for the first time to predict the critical wind speed that produces galloping at specific yaw angles of a cable with the wind. That will also tell us when and by how much we need to increase damping of cables.”