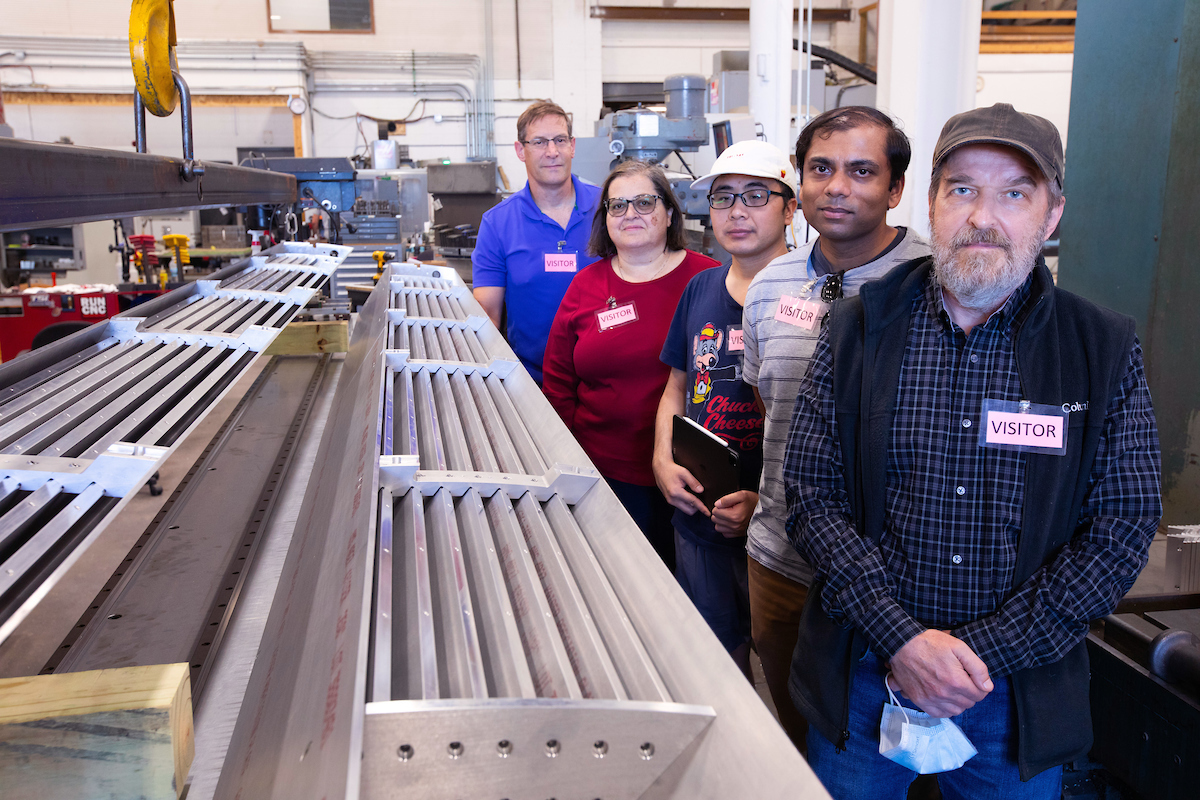 Iowa State physicists, left to right, John Lajoie, Marzia Rosati, Minghui Zhao, Milap Patel and Alexandre Lebedev with two of the aluminum frames manufactured in Ames for the 1,000-ton, sPHENIX particle detector. Because each frame weighs 600 pounds, Jeremy Johnson, a CNC machinist for Technical Services, Inc. of Ames, hooked two of them to a crane and lifted them for the camera. Larger photo. Photo by Christopher Gannon.

AMES, Iowa – It won’t be long before aluminum parts manufactured in Ames are part of a $28 million upgrade to a nuclear physics experiment at a national laboratory in New York. 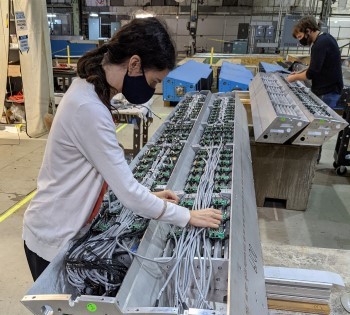 The 32 frames machined and assembled at Technical Services, Inc. on the eastern edge of Ames are the definition of hardware. They’re tough and shiny metal structures, each 600 pounds and 14-feet long. They’re designed to hold and support ultra-sensitive scintillators that light up when hit by subatomic particles and the high-speed electronics that can record and measure that light. They’ll eventually be bolted together to form a cylinder, creating one of many layers of instrumentation within a particle detector designed to explore an exotic state of matter and part of the universe’s history.

That detector is called sPHENIX and is located at the Relativistic Heavy Ion Collider within the U.S. Department of Energy’s Brookhaven National Laboratory in Upton, New York. The detector itself is 1,000 tons and about the size of a two-story house. (Or, as one of the experiment’s illustrations shows, the detector would tower over Chewbacca, the super-sized wookiee from the Star Wars movies.)

The sPHENIX experiment is an upgrade and rebuild of the Pioneering High Energy Nuclear Interaction eXperiment, or PHENIX. Physicists also upgraded the experiment’s name by adding that s, signifying the new experiment’s focus on strongly interacting particles.

The detector, when it records the first proton-proton collisions of gold ions in 2023, will help physicists probe and understand the inner workings of atoms and the flowing, liquid-like, quark-gluon plasma that existed in the earliest moments of the universe.

Iowa State University physicists have been part of the experiment since the early 1990s. John Lajoie, a professor of physics and astronomy, is now a level-two manager for part of the detector upgrade. Two Iowa State postdoctoral research associates – Veronica Canoa Roman and Ejiro Umaka – and a doctoral student – Noah Applegate – are now posted at Brookhaven to help assemble the detector. (See sidebar for other team members.)

Lajoie enjoys the long and challenging process of launching a new detector experiment:

“I like building the detector,” he said. “And I like running it. We’re taking this from concept, through construction, to taking data.”

Once two beams of protons or gold nuclei are colliding and particle measurements are streaming in, “I love being in the counting house when data are taken,” he said. “I love those late nights waiting for beam.”

If his teaching schedule allows, Lajoie said he’ll be on site the first time particles are flying through the detector’s layers and measurements are taken.

Once the sPHENIX detector is collecting data at the rate of about 15,000 events per second, Lajoie said physicists will get busy with two major objectives:

First, they want to track particles called upsilons, each one made up of a bottom quark and an anti-bottom quark. (Quarks are the elementary particles that make up protons and neutrons. They’re literally the tiny building blocks that make up all the matter in the universe.)

These upsilons have three varieties – physicists call them “flavors” – each with different, but similar masses. Particle collisions unleash quarks from their confinement in protons and neutrons, allowing physicists to study them and look for clues about the properties of the quark-gluon plasma.

Second, they’ll study jets, the sprays of particles that fly off particle collisions and into the detector’s instruments. The physicists will record and measure the directions and energies of the jets. Again, that will help them identify properties of the quark-gluon plasma, including its density.

And why is it important to understand the quark-gluon plasma? What is it about the earliest milliseconds of the universe when quarks were free and flowing that can do something for today’s world?

It’s a little like James Clerk Maxwell starting to mess around with electricity and magnetism in the 1860s, Lajoie said. A few theories and equations later, and people were learning to manipulate and eventually master electrons.

That, of course, led to all kinds of powerful and useful technologies.

So, Lajoie wondered, what could happen as physicists, with the help of Iowa State researchers and Iowa-built detector parts, learn more and more about the matter and forces inside a nucleus? How could they be manipulated and mastered? What would that produce for the world?

“That’s what physics tries to do,” Lajoie said. “Physics boils things down to their simplest essence. And that has the capability to take you places you never would have thought.” 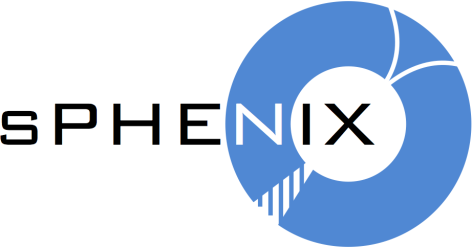 Iowa State physicists are contributing their expertise and sending thousands of pounds of Ames-manufactured hardware to the sPHENIX experiment at Brookhaven National Laboratory in New York. The experiment's particle detector is designed to explore the flowing, liquid-like, quark-gluon plasma. That plasma is an exotic state of matter and part of the universe’s earliest history.

Once two beams of protons or gold nuclei are colliding and particle measurements are streaming in, “I love being in the counting house when data are taken. I love those late nights waiting for beam.”

Iowa State contributors to the PHENIX and sPHENIX experiments include: