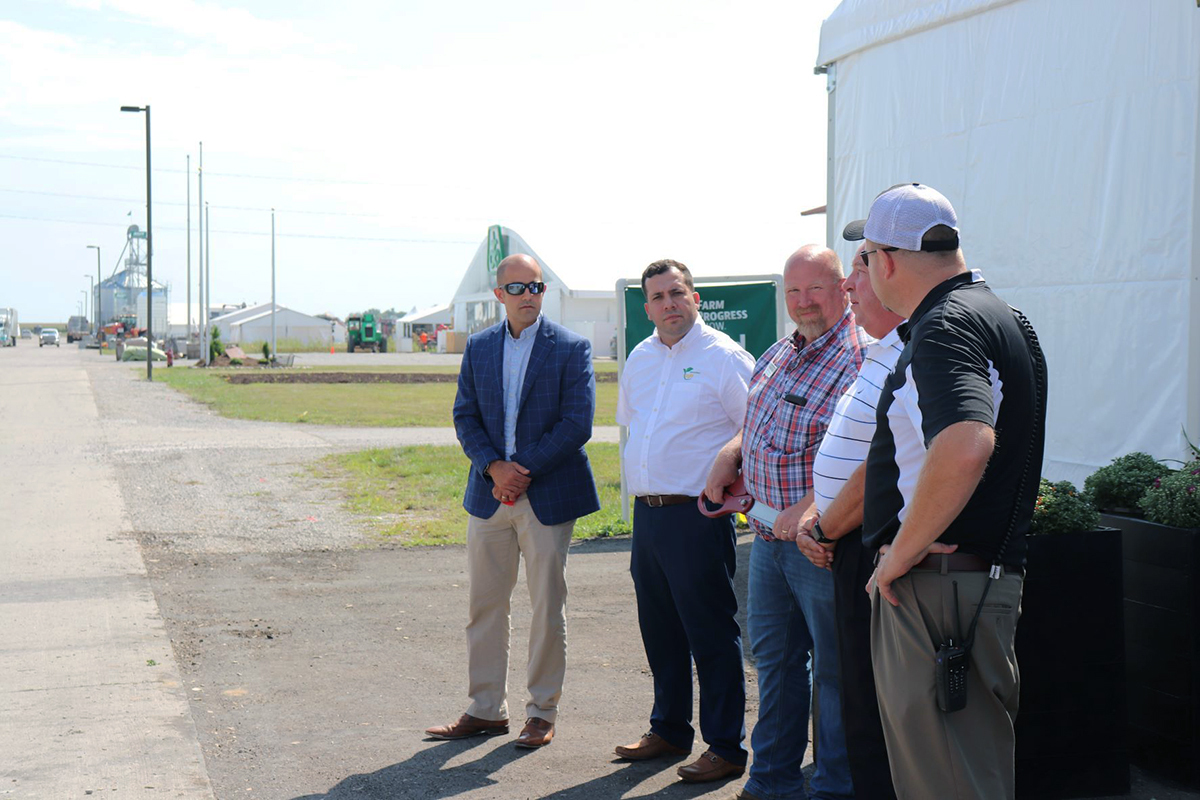 Remarks and a ribbon-cutting highlighted a paving project that used SoyLei technology at the Central Iowa Expo near Boone, home of last summer's Farm Progress Show. Left to right are Eric Cochran of Iowa State University and SoyLei Innovations; Nacú Hernández of Iowa State and SoyLei; Robb Ewoldt, then the Iowa Soybean Association president; Gary Nystrom with the Central Iowa Expo Board and Matt Jungmann with the Farm Progress Show. Larger Photo. Photo by Christinia Crippes/Institute for Transportation.

AMES, Iowa – It all started about 12 years ago when a high school teacher visiting Iowa State University for a summer program asked to help with a research project.

Well, Iowa State engineers Eric Cochran and Christopher Williams thought the teacher could help them start looking for a bio-based alternative to a petroleum-based asphalt additive that extends the life of pavements.

That led to hundreds of lab attempts to find the right ingredients, formulations and production processes for a new biopolymer. Experiments producing fractions of an ounce of material revealed soybean oil could produce biopolymers with the properties the engineers needed. The research eventually progressed to development of a $5.3 million pilot plant with a 1,300-gallon holding tank for those biopolymers. All of that has now progressed to a startup company that’s sold about 400,000 pounds of biopolymers.

SoyLei Innovations, established by six Iowa State co-founders in 2020 (see sidebar) and based in the Iowa State University Research Park, is all about commercializing that biopolymer/asphalt additive and other green technologies developed at the university.

“We believe in the technology,” said Nacú Hernández, a research scientist in Iowa State’s department of chemical and biological engineering and interim CEO and co-founder of SoyLei. “We know its capabilities and wanted to show them to the world and commercialize the technology.”

Even as the Iowa State engineers were producing thousands of pounds of biopolymers per batch at the pilot plant, they were still tinkering with the production process.

They, after all, were trying to supply an industry that works at the scale of roads and parking lots. And so they kept on innovating.

“As researchers, it’s important to interface with industry,” said Cochran, the Mary Jane Skogen Hagenson and Randy L. Hagenson Professor in Chemical and Biological Engineering and a co-founder and technical advisor for SoyLei.

The engineers found a way to simplify production, going from three reactors down to one, and from 24 hours for a batch down to a few hours. It’s a process the engineers call Poly100. That’s production in one reactor, with zero volatile organic chemicals and zero waste.

“Everything that comes into the reactor is part of the product,” Cochran said.

The “one-pot” approach makes it much easier to manufacture and opens up SoyLei biopolymer production to more manufacturers, he said.

Now, “with hundreds of tons of this goo,” Cochran said the researchers are exploring uses beyond asphalt pavements. There are asphalt shingles, for example, or high-performance surfactants used in detergents to reduce surface tension in liquids.

Baker Kuehl, an Iowa State postdoctoral research associate working in Cochran’s group and SoyLei’s lead scientist and one of the co-founders, is working to develop other uses for soy-based polymers, including bioplastics that perform as well or better than petroleum-based plastics.

The original use for their biopolymer is featured on SoyLei’s “Featured Products” page on the company website – additives for asphalt pavements.

There’s the “Invigorate” line of products that increases flexibility in asphalts and slows aging and cracking in pavements. There’s the “Biomag” line that allows more recycled asphalt to be included in new pavements and can also be used to treat and restore existing pavements. And then there’s “Peak 301,” which can extend the life of roofing shingles.

All the products produce chemical reactions at the molecular level that reverse the effects of aging and oxidation, said Williams, Iowa State’s Gerald and Audrey Olson Professor in Civil Engineering, the director of the Institute for Transportation’s Asphalt Materials and Pavements Program and a SoyLei co-founder and technical advisor.

With early support from the Iowa Department of Transportation, the Iowa Soybean Association, the United Soybean Board, the National Science Foundation, the state Board of Regents and Seneca Petroleum Co. Inc., the engineers developed their alternative and over time learned the challenges of manufacturing and marketing a new product.

When one corporate partner eventually stepped away from the project, that left the engineers with decisions to make.

“We believed in the technology,” Williams said. “We saw the best value in it. We had to say, ‘How are we going to do this?’ That’s when some of the group said, ‘Let’s start up a company.’”

The Iowa Staters co-founded SoyLei with a goal to “commercialize green technologies developed at Iowa State University,” according to the company website. “These technologies use renewable resources, such as soybean oil, to substitute products in different industries.”

The name SoyLei is a play on high-oleic soybean oil, the healthier oils with less saturated fat and more monounsaturated fatty acids for the food industry plus valuable oils for manufacturers, said the engineers.

“Those are the soybeans that work best with our technology,” Cochran said.

“The manufacturer is now running 5,000 gallons of product at a time,” Williams said. “And the company can scale even larger.”

Some of that material ended up in a pavement that created a new floor for the huge Varied Industries Tent at the Central Iowa Expo near Boone, the home of last summer’s Farm Progress Show.

The pavement was dedicated with a ribbon-cutting and was even a stop on the media tour previewing the big farm show.

“This technology can help grow Iowa’s economy,” Williams said. “This is a huge market opportunity – and we continue to look for partners as we build.” 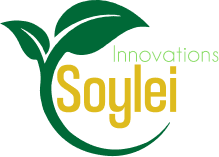 Iowa State researchers have launched a company that's manufacturing and marketing a soy-based additive that extends the life of asphalt pavements and allows contractors to use more recycled asphalt in pavements. The goal of SoyLei Innovations is to “commercialize green technologies developed at Iowa State University.”

“This technology can help grow Iowa’s economy. This is a huge market opportunity – and we continue to look for partners as we build.”