Shehata’s class schedule contained several rigorous, STEM-heavy courses, and he knew he needed to buckle down from the first day of the semester in order to stay on track to graduate by semester’s end.

Then COVID struck the very first week of classes, confining him to bed for two full weeks. Shehata adjusted. He made a plan to catch up on his coursework and stay on track with his classmates.

But, just as he was ready to put his illness behind him, fate intervened once again in the form of a serious car accident that left him dealing with lingering back pain.

It might have been tempting to throw in the towel and start fresh the following semester, but Shehata leaned into the three keys that had gotten him this far in his academic career:  persistence, consistency and grit. That trio of values carried him through, and he’ll earn his bachelor’s degree in bioinformatics and computational biology from Iowa State University this month, despite all the obstacles.

“I told myself giving up isn’t a choice,” Shehata said during a recent interview. “You have to keep getting up.”

A study weekend turns into disaster

On Sept. 10, Shehata and a friend found themselves hanging upside down by their seatbelts in Shehata’s car after a nasty wreck. It was the weekend of the Cy-Hawk football game and, rather than go to Iowa City to attend the game, Shehata decided to buckle down in Ames and hit the books. His bout with COVID at the start of the semester had forced him into academic catchup mode, so he arrived at the library first thing Saturday morning.

He studied for several hours before taking a break to go on a grocery run. It had rained that day, he recalled, and the Ames streets were wet. His car started to hydroplane while driving down a sloping street. Shehata said he overcorrected, sending the vehicle rolling through a ditch.

He said he remembers opening his eyes and discovering he and his friend were suspended upside down by their seatbelts. They made sure they hadn’t suffered any serious injuries and then got out of the car as quickly as possible and waited for police to arrive.

The car accident left Shehata with lingering back pain, yet another obstacle he would have to overcome to stay on track to graduate. Some of those around him suggested that he consider delaying his graduation plans, but Shehata stayed focused. With enough persistence, consistency and grit, he could stay on track to reach his goal, he decided.

Both of Shehata’s parents are Egyptian, and his father settled at the University of Northern Iowa in Cedar Falls, first as a student and later as a professor. Shehata grew up in Cedar Falls, but he spent most of his summers in Egypt where he became immersed in the culture. His family spoke mostly Arabic in his home, so Shehata took English-as-a-second-language courses at school.

After graduating from Cedar Falls High School, he followed his brothers to Iowa State University where he intended to study computer engineering. But he struggled to adjust to the rigors of college calculus and other challenging courses during his first semester, leaving him with a 1.81 grade-point average. He found support and understanding through the ISU chapter of the National Society of Black Engineers, which promotes the recruitment and retention of underrepresented and multicultural students in disciplines related to science, technology, engineering and mathematics. He got involved with the organization, attended its national conference and met other students from similar backgrounds who faced many of the same challenges during the transition into higher education. Today, he looks at that first semester as a character-building experience that helped him develop the perseverance he would rely on later.

The natural world always fascinated him. The sheer diversity of life on Earth – from organisms as complex as human beings to microscopic bacteria – captured his imagination at an early age and inspired his curiosity. So when he discovered that Iowa State offered an undergraduate degree in bioinformatics and computational biology, he knew he’d found a way to bridge his passions for biology and computers. The bioinformatics field harnesses innovative computational technology to analyze biological data.

Once enrolled in the bioinformatics program – and with plenty of persistence, consistency and grit – Shehata rebuilt his GPA and made the Dean’s List during subsequent semesters. He also served as the vice president of the ISU chapter of the National Society of Black Engineers as a way of giving back to an organization that helped him find his footing at college.

Making a difference through research

Shehata studied abroad for a term at Swansea University on the Welsh coast. He took an oceanography course, which inspired him to pursue an internship later at the California Academy of Sciences. During the internship, he studied the effect of climate change on coral. Coral, Shehata learned, soak up great quantities of carbon that might otherwise be released into the atmosphere. That makes coral an excellent means of combating climate change.

However, warming ocean temperatures resulting from climate change threaten coral populations all over the globe. Shehata contributed to research that identifies the types of algae populations that share symbiotic, or mutually beneficial, relationships with the coral. The research could pave the way to coral that are better able to withstand disease and fluctuations in water temperatures.

Shehata is applying for graduate schools with the intention of pursuing a career in marine biology. He’s also working toward publishing the research he conducted during the internship. He dreams of a future where his work makes a lasting contribution to the fight against climate change. And by relying on the three keys to success that saw him through his last semester as an undergraduate, it’s likely he’ll succeed.

“If I really want to make a difference, I have to keep going,” Shehata said. “And the biggest driving aspects are just being consistent, persistent and having grit.”

Disaster struck not once but twice during Yusuf Shehata's final semester at Iowa State University. While others suggested he delay graduation another term, he leaned into persistence, consistency and grit to carry him through. 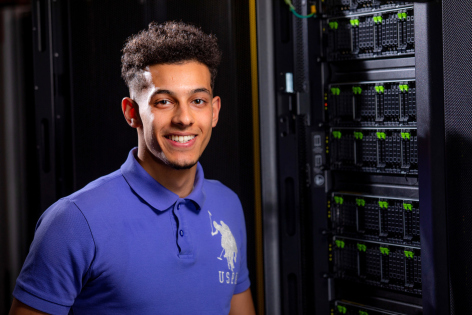 A brush with COVID and a car accident couldn't stop Yusuf Shehata from finishing his coursework and earning his degree this semester. Photo by Christopher Gannon/Iowa State University News Service. Larger image.

Nearly 2,100 students are completing degrees at Iowa State this semester. Their achievements will be celebrated during commencement ceremonies in Hilton Coliseum on Dec. 16 and Dec. 17. Full 2022 commencement details. 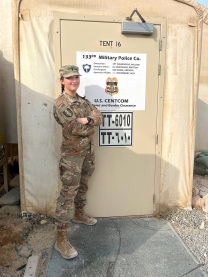 Brittany Whitehead had to balance her military career and family while completing her master’s degree in family financial planning from Iowa State University through an online program. Now, she plans to use her new degree to help servicemembers plan their financial futures. Read Brittany's story.

Even as a little kid, Khushi Kapoor had a fascination with flying. That passion eventually led her to Iowa State's Aerospace Engineering program, where the senior pursued all sorts of opportunities to learn and experiment.