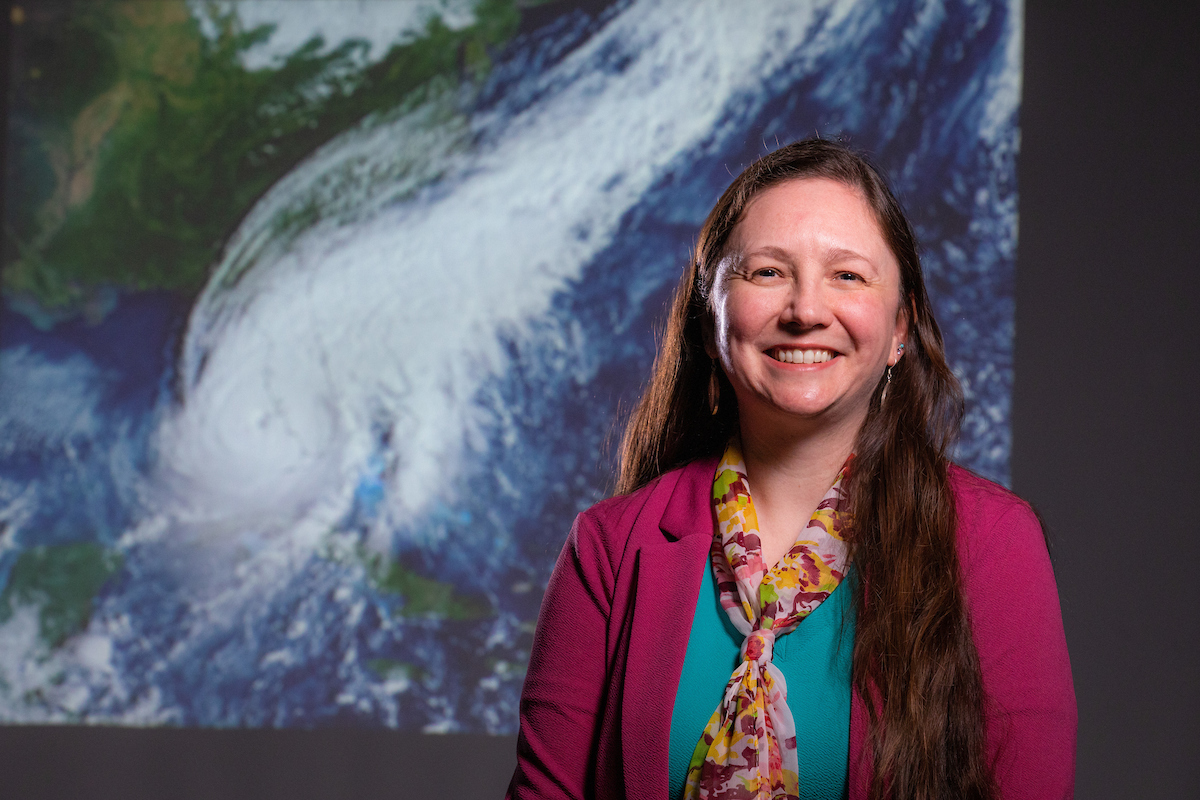 Iowa State's Christina Patricola studies tropical cyclones here in Cyclone Country. She and collaborators have recently published studies of the storms and the hurricanes they can produce. (Larger photo.) Photo by Christopher Gannon/Iowa State University.

AMES, Iowa – A warming climate will increase the number of tropical cyclones and their intensity in the North Atlantic, potentially creating more and stronger hurricanes, according to simulations using a high-resolution, global climate model.

“Unfortunately, it’s not great news for people living in coastal regions,” said Christina Patricola, an Iowa State University assistant professor of geological and atmospheric sciences, an affiliate of the U.S. Department of Energy’s Lawrence Berkeley National Laboratory in California and a study leader. “Atlantic hurricane seasons will become even more active in the future, and hurricanes will be even more intense.”

The research team ran climate simulations using the Department of Energy’s Energy Exascale Earth System Model and found that tropical cyclone frequency could increase 66% during active North Atlantic hurricane seasons by the end of this century. (Those seasons are typically characterized by La Niña conditions – unusually cool surface water in the eastern tropical Pacific Ocean – and the positive phase of the Atlantic Meridional Mode – warmer surface temperatures in the northern tropical Atlantic Ocean).

In addition, the simulations project an increase in storm intensity during the active and inactive storm seasons.

“Altogether, the co-occurring increase in (tropical cyclone) number and strength may lead to increased risk to the continental North Atlantic in the future climate,” the researchers wrote.

Patricola added: “Anything that can be done to curb greenhouse gas emissions could be helpful to reduce this risk.”

Iowa State is home to the Cyclones and storm sirens are part of the hype at most athletic contests. Talk of the Cyclones is all over campus. But North Atlantic tropical cyclones? What are they?

Exactly, says the National Oceanic and Atmospheric Administration. Tropical cyclone is a general reference to a low-pressure system that forms over tropical waters with thunderstorms near the center of its closed, cyclonic winds. When those rotating winds exceed 39 mph, the system becomes a named tropical storm. At 74-plus mph, it becomes a hurricane in the Atlantic and East Pacific oceans, a typhoon in the northern West Pacific.

Patricola grew up in the Northeast and can still tell stories about 1991’s Hurricane Bob.

“That was a big one for us in Massachusetts,” she said. “For me, it was very exciting. It really caught my interest.”

She was a Weather Channel fanatic through a lot of hurricanes in the mid-1990s. And that led to studies of geological and atmospheric sciences at Cornell University in New York, followed by atmospheric science and climate research at Texas A&M University and Lawrence Berkeley National Laboratory. Patricola joined the Iowa State faculty in August 2020.

Why are tropical cyclone numbers so consistent?

Patricola and another set of collaborators have just published a second research paper about tropical cyclones. This one is also in Geophysical Research Letters, with Derrick Danso, an Iowa State postdoctoral research associate, as first author. The paper examines a possible explanation for the relatively constant number of tropical cyclones observed globally from year to year. (See sidebar.)

Could it be that African Easterly Waves, low pressure systems over the Sahel region of North Africa that take moist tropical winds and raise them up into thunderclouds, are a key to that steady production of storms?

Using regional model simulations, the researchers were able to filter out the African Easterly Waves and see what happened. As it turned out, the simulations didn’t change the seasonal number of Atlantic tropical cyclones. But, tropical cyclones were stronger, peak formation of the storms shifted from September to August, and the formation region shifted from the coast of North Africa to the Gulf of Mexico.

So African Easterly Waves many not help researchers predict the number of Atlantic tropical cyclones every year, but they do appear to impact important storm characteristics, including intensity and possibly where they make landfall.

Both papers call for more study.

“We are,” Patricola said, “chipping away at the problem of predicting the number of tropical cyclones.”

“Unfortunately, it’s not great news for people living in coastal regions. Atlantic hurricane seasons will become even more active in the future, and hurricanes will be even more intense.”