AMES, Iowa – For Aileen Keating, the scientific process is a mystery waiting to be unraveled.

Keating, an associate professor of animal science at Iowa State, studies human and animal reproduction. Her research takes on questions regarding how factors such as environmental stress, obesity and chemical exposure affect female fertility, and her work has important implications for both animals and people.

She developed an affinity for animals and the outdoors during her childhood in Galway, Ireland, before studying biomedical science, microbiology and biochemistry. A sense of discovery and a dedication to research tie all of her experiences together.

“I like trying to figure out what’s going on inside cells,” Keating said during a recent interview in her lab in Kildee Hall. “I like seeing what the experiment tells you.”

Her work also has implications for human health. Keating received a three-year, $150,000 Bailey Research Career Development award in 2017 to investigate how obesity affects ovarian capacity. She’s also looking into how fertility changes for women who have received chemotherapy.

“We also study what factors are important for producing a good-quality egg to be ovulated so that the offspring that develop from that egg can be healthy and viable and have no problems for their lifetime,” she said.

For instance, she said her lab is a leader in studying the additive effects that obesity and chemical exposure have on the function of the ovary. Keating said some forms of chemical exposure can damage the DNA structure of eggs inside an ovary, but the ovary has some capacity to repair that damage. However, obesity can impair that reparative capacity, she said.

Keating said many of the lessons derived from studying rodents and production animals also apply to human physiology. Though many of the animals she studies carry litters rather than a single offspring, as human women typically do, the same factors that stress animal fertility often have similar effects for human fertility, she said. That means studying model animals can pave the way to new insight into human reproduction. 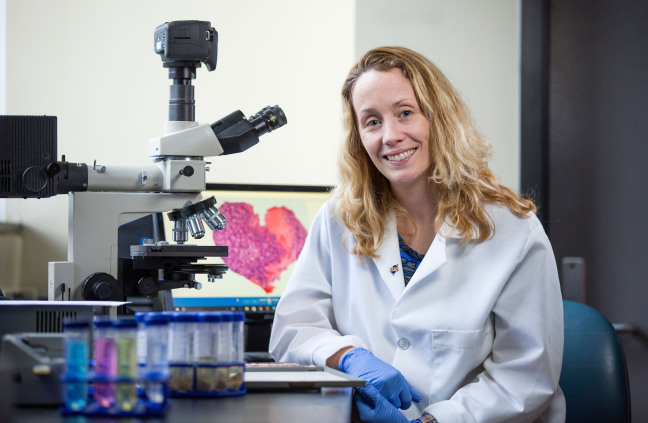 From Galway to Ames

Looking back on her childhood near Galway, located on the west coast of Ireland, Keating describes herself, her brother and two sisters as “country kids.” She recalls spending time outdoors exploring and an early interest in animals. She considered pursuing veterinary medicine but decided to study microbiology, biomedical science and biochemistry instead.

“There’s tons we don’t know yet, and that’s the joy of research, right?” she said. “But you could be looking for something that doesn’t exist, so that’s always a challenge.”

She said students in her lab sometimes grow frustrated when the data they collect don’t show strong results, but Keating said that’s all part of the scientific process. Every experiment, whether it produces dramatic results or not, fills in a blank that can inform future research, she said.

“It’s all useful and adds to the scientific knowledge,” she said.