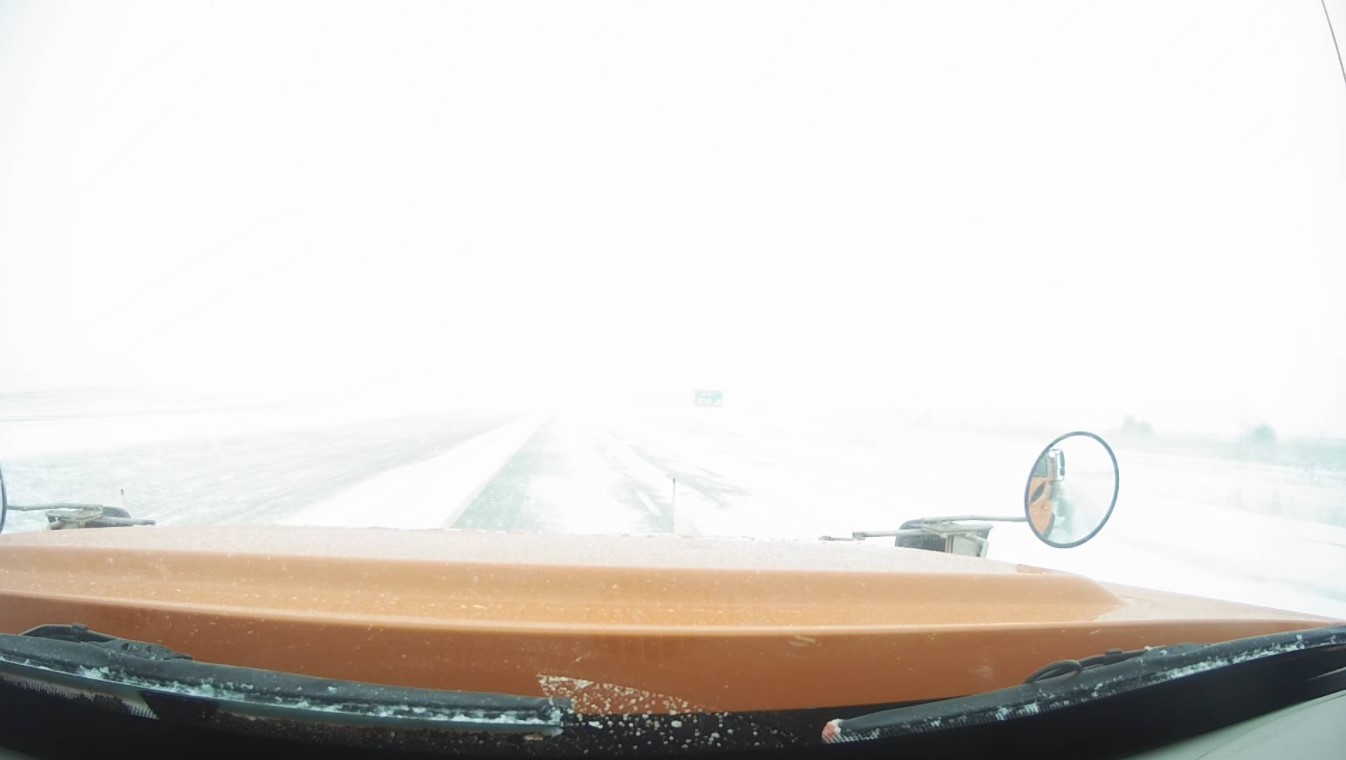 A navigation system for snowplows could help operators work through low-visibility conditions when winter storms blow across Iowa. Larger photo. Photo courtesy of the Iowa Department of Transportation.

AMES, Iowa – Most Iowa drivers know the stress of a winter storm.

High winds throw snow over farm fields and across the highway. At night, flakes shine like mini comets shooting across your headlights, leaving bright tails as they go. Windshield wipers ice up and smear more than clear. You slow and lean over the wheel for a better view. The white is everywhere – including across your knuckles.

Now, imagine driving a tandem-axel, nearly 30-foot-long dump truck into that whiteout. One with an oversized, 11-foot blade latched to the front and seven tons of sand and salt in the back. There’s a brine tank back there, too. Behind the wheel, a plow operator understands the job at hand – to clear the roads and help travelers get to safety.

“That person operating the snowplow in the snow is facing so much workload and stress,” said Anuj Sharma, the Pitt-Des Moines, Inc., Professor in Civil Engineering at Iowa State University and a research scientist at Iowa State’s Institute for Transportation. “We want to at least give them a helping hand and some tools to help.”

To do that, Sharma has assembled a research team to develop a new navigation system for Iowa snowplows. (See sidebar for a team roster.) A two-year, $502,265 grant from the Iowa Department of Transportation is supporting their work.

It’s a common situation for the Iowa DOT’s snowplow operators:

“While visibility in town might not be much of an issue, when you get in the wide-open spaces it gets really bad,” said Tina Greenfield, the coordinator of the Iowa DOT’s Road Weather Information System. “Snowplow operators can struggle to see and have a tough time navigating the road. At times, they can’t see a car in front of them.

“Even though our snowfighters are in these humongous vehicles, there are times when the visibility is so bad, even they need to be pulled off the road until visibility improves.”

When the plows head in, roads can start drifting over. Big drifts can make it even harder to clear roads when visibility improves and plowing resumes. And that slows the return to safe driving conditions.

That has Iowa DOT officials exploring various sensors, radar and GPS systems that may help snowplow operators stay on the roads during low-visibility conditions.

“This is all about driver aids,” Greenfield said. “We’re not talking about technology taking any kind of control over the vehicle. The driver would still be responsible for controlling the vehicle. This is more of a navigation system than a control system. That’s where we’re looking to ISU for assistance.”

Sharma knows a lot about mining data for transportation systems.

He's co-director of the REACTOR Laboratory for the Institute for Transportation. The lab takes the huge amounts of real-time data collected by the Iowa DOT, sorts through it and identifies problems. The goal is early detection of traffic incidents, better traffic management and safer travel.

They’ll determine which sensors and technologies can withstand winter conditions and maintain their accuracy in a whiteout. Working with the Iowa DOT, the researchers will also examine which technologies are most useful to a snowplow operator. Next steps include learning how all those data streams can be fed into a computer and displayed in a way that helps drivers make decisions without distracting them.

Once the researchers understand how all the sensors and interfaces work together, they’ll equip a real snowplow and do simulations and eventually road tests.

Sharma said the entire system will be based within the vehicle – there’s no need for any kind of remote command and control that would depend on network connections that are likely to be trouble in a storm.

“All of this technology has improved quite a bit recently,” Sharma said, noting passenger cars now help drivers spot a vehicle in their blind spots and maintain position in the center of a lane.

Now researchers hope to take those kinds of driver-assists to workhorse vehicles in extreme conditions.

“This is a very exciting project,” Sharma said. “We have access to today’s technology. And we want to jump the technology gap to prove this concept rather than waiting for industry to catch up.”

The Iowa Department of Transportation is supporting Iowa State researchers' work to develop and test a navigation system that could help keep snowplow operators on the roads -- even when the snow is blowing and drifting, creating low-visibility, whiteout conditions.

“That person operating the snowplow in the snow is facing so much workload and stress. We want to at least give them a helping hand and some tools to help.”

“Even though our snowfighters are in these humongous vehicles, there are times when the visibility is so bad, even they need to be pulled off the road until visibility improves.”

In addition to Anuj Sharma, the snowplow-navigation research team at Iowa State includes: