Twelve Iowa towns have been selected to participate in the award-winning community visioning program this year. ISU's landscape architecture extension is one of the program's sponsors.

Davenport native and Iowa State student Amber Herman will study and do research aimed at fostering agriculture during a trip to Uganda this semester.

Iowa State University's Department of Materials Science and Engineering is celebrating 100 years of teaching and innovation.

The next generation of jet fighter aircraft could fly farther and faster thanks to a new high-strength aluminum alloy prepared at the U.S. Department of Energy's Ames Laboratory.

Wendy Wintersteen, interim dean of Iowa State's College of Agriculture and interim director of the Iowa Agriculture and Home Economics Experiment Station since August 2005, will permanently serve in these positions effective Jan. 1, 2006.

An ISU graduate student in civil engineering has accepted an invitation to train and wrestle in Japan. His kind of wrestling is the drop-kicking, body-slamming, jumping-off-the-top-rope style you see on television.

Six finalists have been named in the search for a new dean of students at Iowa State. 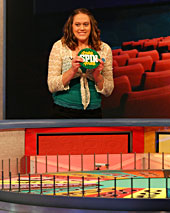 Iowa State junior and civil engineering major Jill Lansing from Cresco will be guessing letters and buying vowels on Wheel of Fortune Jan. 10 at 6:30 p.m. The program, which airs on TV station WH0 13 in central Iowa, is part of "Hollywood Walk of Fame Week" on the long-running game show.

Iowa State researchers are developing technology that will allow a purse to charge your electronic devices.