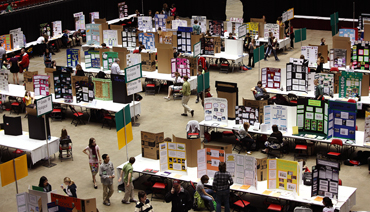 CyGold, a student organization focused on financial literacy peer education, was founded last fall and should begin making presentations in residence halls, fraternities and sororities later this spring. Three members from CyGold's student team made their inaugural financial literacy PowerPoint presentation before the Government of the Student Body's executive cabinet on March 7.

Jeff and Deb Hansen, owners/founders of Iowa Select Farms, have pledged $2 million to the College of Agriculture and Life Sciences for a new agriculture student learning center at Iowa State. The Iowa Board of Regents approved a request to name the $7 million facility in honor of the Hansens.

New retail reports by Liesl Eathington (right), an assistant scientist in Iowa State's Department of Economics, has found that retail sales in most Iowa regions appear to have stabilized over the past fiscal year following a substantial downturn during the recession. Iowa State's annual retail trade analysis is based on state-reported sales of goods and services subject to Iowa's statewide sales tax. Eathington found a slight growth in Iowa retail sales over the last fiscal year.

Get the dirt on soils during Soils Week at Iowa State University. The science, utilization, history and variety of one of Iowa's most valuable resources will be explored March 28 through 30. All events are free and open to the public.

Three Iowa State University researchers -- including Sarah Ryan (above) -- are working to reduce costs and maintain reliability as more renewable energy is added to the nation's energy grid. Their goal is to help electricity market managers meet energy demands in the face of new uncertainties arising from the growth of renewable resources such as wind and solar power.

How to grow a planet

BBC Two
In this series Professor Iain Stewart tells a stunning story about our planet. In Senegal, he meets the cleverest chimps in the world, which are the ones studied by Jill Pruetz, an Iowa State University anthropology professor.

Dionysios Aliprantis is a modern sculptor. But he's carving out his niche sculpting motors. An assistant professor of electrical and computer engineering at Iowa State, Aliprantis hopes to re-shape the designs of motors and generators to make them work more efficiently.
Loading...