Iowa State University alumnus Howard Otto Lorenzen, known as the "Father of Electronic Warfare" for his breakthrough work at the Naval Research Laboratory, has been memorialized with the launch of a new U.S. Navy ship.

The Iowa Office of the State Medical Examiner has completed its investigation in the death of ISU student Jon Lacina, who was last seen Jan. 22. His body was found April 14 in an outlying building on the former ISU Dairy Farm south of campus.

ISU Department of Public Safety Director Jerry Stewart says the findings of the State Medical Examiner's Office are consistent with the investigation conducted by ISU Police and the Iowa Division of Criminal Investigation.

Evidence indicates Lacina fell down a flight of steps leading to a below-grade boiler room at the Dairy Pavilion, Stewart says. The "sharp force injuries" describe nonlethal cuts to Lacina's hands when he came in contact with panes of glass in the door.

Team PrISUm finished the seven-day, 1,100-mile American Solar Challenge much stronger than it started the race. The team, in fact, was able to race the speed limit to the finish line in Naperville, Ill.

The Iowa African-American Hall of Fame, housed in ISU's Black Cultural Center, will induct new members at an Aug. 6 ceremony in Des Moines. Tickets for the reception and banquet are available through Rose Wilbanks, Office of the Vice President for Student Affairs, at (515) 294-1909.

A new green, bio-based method for producing a much-used fuel additive and industrial chemical that is currently made from petroleum products has been developed by Iowa State University researcher Thomas Bobik. 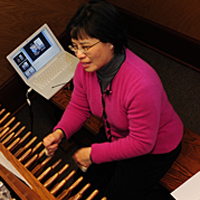 The Summer Carillon Concert Series resumes on the Iowa State campus starting Tuesday, June 29. A guest carillonneur will perform each month during June, July and August. ISU carillonneur and Associate Professor of Music Tin-Shi Tam (pictured) will conclude the series Sept. 12 when she is joined by the ISU percussion ensemble and brass quintet.
News release.

Song Zhang, an Iowa State assistant professor of mechanical engineering, is seeking patents for his 3-D imaging technology. He's hoping the 3-D images will be able to help doctors diagnose health problems or security officials identify suspects through facial recognition. The technology is also attracting the attention of rock stars.
Listen to story.