ISU graduate student Glenn Marcus (right) was among Iowa State students who made education presentations to high school and middle school students during the "I'll Make Me A World in Iowa" celebration in Des Moines Jan. 25-26. The event highlighted African-American arts, culture and contributions. 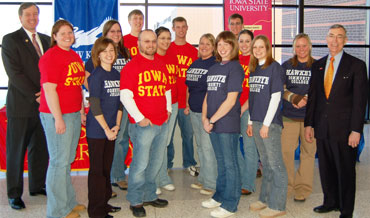 Tahira Hira, executive assistant to the president and professor of personal finance and consumer economics at ISU, was appointed Jan. 22 by President George W. Bush to the President's Advisory Council on Financial Literacy in a White House ceremony.

Meghan O'Brien, an ISU Extension program specialist who is on the staff of Iowa State's Regional Capacity Analysis Program (ReCAP), did comparative analysis of select Iowa retail and service business thresholds from 2000-2005. Her report found that service-related businesses outperformed those in retail in terms of reduction of threshold levels, which indicates the size of the market necessary for a business to survive.

An Iowa State University researcher is having his findings published in the journal Nature, an international, peer-reviewed, interdisciplinary journal of science and the most-cited weekly science journal in the world.

Iowa State continues the annual tradition of observing Black History Month with several on-campus events scheduled this February. From lectures to panel discussions to the performing arts, students, faculty and staff will have many opportunities to immerse themselves in the African-American culture.

ISU's Office of Social and Economic Trend Analysis is now the Regional Capacity Analysis Program (ReCAP). It has a new Web site and a focus on helping communities take a forward-looking approach in dealing with change by assessing their capacity for meeting future challenges.

The Iowa Egg Council has made a $2 million gift commitment to establish an endowed egg industry program in Iowa State University's College of Agriculture and Life Sciences.

Iowa State University researcher Tong Wang is researching new ways to maximize the amount of oil that can be recovered after a corn kernel is used for ethanol fermentation.

Iowa State University's Center for Transportation Research and Education helped the Nevada and Sigourney school districts put two of the country's first hybrid school buses on the road this month. The buses use an electric motor at street speeds; their V-8 diesel engines kick in at higher speeds. The districts will show off their hybrid school buses during short ceremonies on Jan. 24. The public is invited. Iowa State researchers will study and evaluate the buses' performance over three years.

Trudy Huskamp Peterson, an Iowa State University alumnus and retired director of the National Archives, will talk about "Legacies of Repression: Archives and Human Rights," at 8 p.m., Monday, Jan. 28 in the Memorial Union Sun Room. The event is free and open to the public. Peterson is a leading figure in international efforts to preserve records of governmental truth commissions and international criminal tribunals.

An Iowa State team of researchers is hoping to find a way to produce vaccines that work better, use smaller doses and require only one trip to the doctor's office.