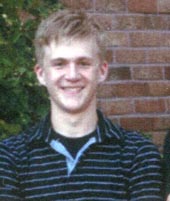 Iowa State University Police have issued a missing persons alert and seek the public's assistance in locating a student who has not been seen since Friday night, Jan. 22.

Jonathan Lacina, 21, was last seen leaving 300 Stanton Ave. at approximately 9:30 p.m. on Jan. 22. Friends and family have not seen or heard from Jon Lacina since that time. Lacina's father, Tom, called ISU Police to report him missing at 8:39 a.m. on Saturday, Jan. 30.