When Iowa State University participated in the U.S. Department of Energy's 2009 Solar Decathlon competition, the plan was to eventually monitor the long-term performance of the solar-powered Interlock House, which was designed and constructed by students. The house has been reassembled at the Iowa Department of Natural Resources' Honey Creek Resort State Park for use as the nature interpretive center and staff offices. And Iowa State researchers are gearing up to track the building's performance in Iowa's climate.
News release.

They're calling it Cyclodrome. And deep in the bowels of Iowa State's College of Design, the 15 architecture graduate students are working at a frenetic pace to build it. Even though they had never before seen, ridden or even heard of a velodrome. Even though no plans or dimensions existed to guide them. They're building the nation's smallest velodrome for the nonprofit Des Moines Bike Collective. And it should be ready to roll in Des Moines on July 8.
News release.

The Iowa State University Dairy Farm will host a Dairy Month celebration on June 17 from 6 to 11 a.m. The public event will include tours of the milking parlor, barns and a discovery center for children. Free samples of milk, cheese, yogurt and ice cream will be available, courtesy of Iowa's dairy processors. ISU's state-of-the-art Dairy Farm is at 52470 260th St. south of Ames.

Summer school used to be the time to take dreaded classes or play catch up. But these days, it comes in all shapes, sizes, locations, subjects and modes. At Iowa State, the summer course offerings cover the gamut. From the impact of geologic disasters to the invention of the superhero ... from the why of motion sickness to the how of celestial navigation ... from the history of the kimono to the future of downtown Des Moines.
News release. 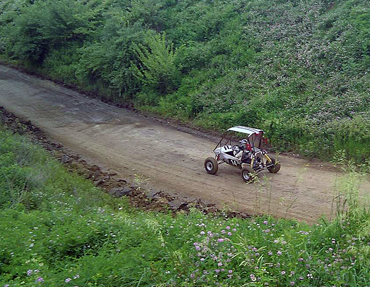 The student-engineers of Iowa State's Baja SAE Team will race their off-road buggy June 8-11 near Peoria, Ill. They think they've solved some of the problems that slowed last year's car during a four-hour endurance race. And so they're optimistic they have a competitive car again this year.
News release.

Ann Thompson -- a University Professor and founding director of Iowa State's Center for Technology in Learning and Teaching -- was named one of the "10 most influential people in ed tech for 2011" in the June issue of Tech & Learning magazine.
News release.

The Washington Times
Former Massachusetts Gov. Mitt Romney announced Thursday that he will once again seek the Republican presidential nomination, but four years after his first bid, analysts -- such as Ben Crosby, an Iowa State University English professor -- say he will once again face the same unique hurdle: his Mormon religion.
See story.

La Niña may be responsible for this year's devastating tornadoes, says ISU Professor Bill Gallus, but the number of significant tornadoes (EF-2 or greater) has stayed the same or even fallen slightly over time. It's the destruction that is so extraordinary. "It seems strange to say, but it's bad luck," Gallus said. "It's a big coincidence that the tornadoes this year have been hitting fairly large cities."