A $1 million gift from alumni Steven and Barbara King, Maple Plain, Minn. will help fund an addition to the College of Design. The addition will be designed using the latest "green" building materials and techniques.

The source of star dust

Lee Anne Willson, a University Professor of physics and astronomy at Iowa State University, studies the stars that produce the kind of dust collected by NASA's stardust mission.

Two Iowa State researchers are serving on the editorial board that is launching a new scientific publication devoted to molecular biology and crop improvement.

"Wildness, Wilderness and the Creative Imagination"

The ISU Creative Writing program will hold a free public symposium on "Wildness, Wilderness and the Creative Imagination" Feb. 20-22.

More than 1,200 students from other Big 12 schools are expected to visit campus Feb. 23-25 for the annual Big 12 Conference on Black Student Government. Activist Angela Davis is among conference speakers.

More on the conference.

Iowa State's 2006 non-conference football slate will include a season-opening Thursday night game and two other contests under the lights.

Shanda Rae Munn, 20, Lawler, has been been arrested and charged in connection with a fatal hit-and-run accident in December. Munn was charged with Homicide by Vehicle (Class B Felony) and Failing to Stop at an Accident Resulting in the Death of Another Person (Aggravated Misdemeanor). Investigators believe the victim, Kelly Jean Laughery, 20, was walking along Mortensen Road in Ames when she was struck.

Iowans could be heading round the roundabouts

Hillary Isebrands, an Iowa State University doctoral student, is studying how modern roundabouts on rural Midwest highways can move traffic and save lives. 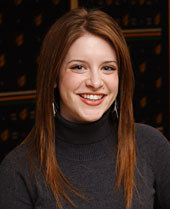 Joe knows meat. In fact, ISU animal science professor and extension meat specialist Joe Cordray has developed courses and programs to share that knowledge with Iowa meat processors. But the growing availability of "case-ready" meat means the guy behind your supermarket counter may not know the difference between prime, choice and select. The Post offers 11 top tips to help you choose and prepare the perfect steak.