The Cyclone football opener next Thursday evening will put campus parking lots in high demand all day, since the stadium and Iowa State Center lots need to be vacated for football fans. Here are a few tips for fans and commuters. 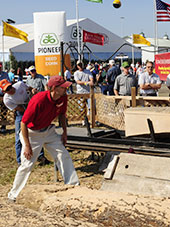 At the Farm Progress Show

A log-sawing demonstration is part of ISU Extension's massive exhibit at the Farm Progress Show in Boone.

About the ISU exhibit.

Ardith Maney, retired ISU political science professor, plans to go to Georgia later this month to assist with fall classes at the community college she helped launch there. But with the conflict in Gori, a small city about 20 miles from the country's border, she is unsure whether she'll be able to make the trip or when classes might start.

The buzz in Beijing -- besides Michael Phelps' eight gold medals -- is the new racing swimsuit that's helping world-class athletes to break world records. ISU Professor Rick Sharp played a key role in the design of Speedo's LZR and says the whole idea behind the suit's support system is to reduce drag and help the swimmer maintain a flat, streamlined position in the water.