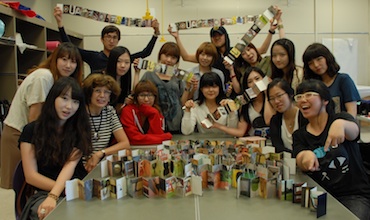 The College of Design is hosting a group of 15 students from Yeungnam University in Daegu, South Korea, for a three-week intensive design and English workshop, June 30 through July 25. The students begin each weekday with a 90-minute English class followed by about four hours of studio instruction with faculty from the college's graphic design program.
News release.

Iowa State University's Mayly Sanchez has won a National Science Foundation early career grant that allows her to contribute to the proposed $900 million Long Baseline Neutrino Experiment. Sanchez is working to develop new, better and cheaper photodetectors that will help physicists pick up the faint trails of neutrinos, subatomic particles that normally race through matter without leaving a trace.

ISU's College of Business ranks third in a recent U.S. News & World Report list of the least expensive public graduate business schools for in-state students, and is also the fifth-least expensive on the magazine's list for out-of-state students. In April, the ISU Master of Business Administration (MBA) program was third in a U.S. News ranking of MBA career placement success.
News release.

This time of year, many lakes around Iowa start to develop blue-green algae that can impair recreation and harm drinking water. Iowa State University researchers are examining why the algae, known as Cyanobacteria, invade the lakes and what can be done about it.

Board of Regents approves new Bachelor of Design degree at ISU

A new degree offered by the Iowa State University College of Design provides additional options for students. The state Board of Regents approved the Bachelor of Design degree program at its June meeting. The four-year, studio-based degree consists of one year in the college's freshman Core Design Program followed by three years in the bachelor's program. The Bachelor of Design will center on interdisciplinary thematic studios and forums that help students connect history and theory to design practice through hands-on experiences addressing different kinds of design challenges. Students can enroll in the program this fall; however, the college primarily will promote it for fall 2012 enrollment.

GOP presidential candidates will converge on Iowa State in just under a month for a debate in Stephens Auditorium on Thursday, Aug. 11; and the Iowa Straw Poll two days later in Hilton Coliseum. And even though some candidates are choosing to limit their campaigning within the state, ISU political experts still see plenty at stake.
News release.

The summer 2011 issue of VISIONS profiles a few of the courageous men and women who have served their country in conflicts ranging from the world wars to the war on terrorism, and looks at the services Iowa State provides to its current student veterans.
ISUAA story: "Serving the students who serve"

Charles T. Manatt, founder of a prestigious law firm, a former Democratic National Committee chairman and an ambassador during the Clinton administration, has died, his law firm said Saturday. He was 75. Manatt, who was born in Chicago, was raised on a farm near Audubon and was a graduate of Iowa State University. His wife, Kathleen, is also an ISU graduate, and a lecture series and an endowed chair are named after them.

The senior market (age 55+) is the fastest-growing group of subscribers to online dating sites over the past five years. Research by Iowa State University sociologist Alicia Cast shows that older adults who go online to meet people generally find success. And, Cast says, they tend to have shorter courtships -- "18.5 months as opposed to 48 months for couples who met in a more traditional way."

Dr. Jan Shearer, professor and Extension veterinarian, has been selected as the 2011 recipient of the American Veterinary Medical Association's Animal Welfare Award. Read more about it here.

ISU Extension corn agronomist Roger Elmore was interviewed by Voice of America reporter Steve Baragona about a grant from CIMMYT to help developing nations increase maize production. The story and audio are here.