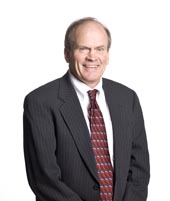 Richard S. Swanson, president and CEO of the Federal Home Loan Bank of Des Moines, is the fall 2009 speaker for the Robert Stafford Lecture Series on Banking in Iowa State University's College of Business.

University Book Store will apply a $300,000 award from the U.S. Department of Education toward the launch of a textbook rental program at Iowa State.

In an Oct. 9 e-mail to faculty and staff, President Geoffroy updated the university community on Iowa State's budget situation as a result of the Revenue Estimating Conference and Governor Culver's announcement of a 10 percent across-the-board cut to all state budgets. Iowa State's share of that reduction is estimated to be $24.5 million.

Associated Press
Mark Widrlechner is out to save a species from extinction. It's the native ash tree, and although it provides $25 billion worth of timber and decorates backyards across North America, an unstoppable bug has slowly killed millions of trees in 13 states and could cause the species' ultimate demise - unless Widrlechner, an Iowa State professor, is successful.
See story.

U.S. News & World Report
A family, school and community intervention program improved children's eating and exercise habits and reduced the amount of time they spent in front of the television, an Iowa State study has found.
See story.
Loading...